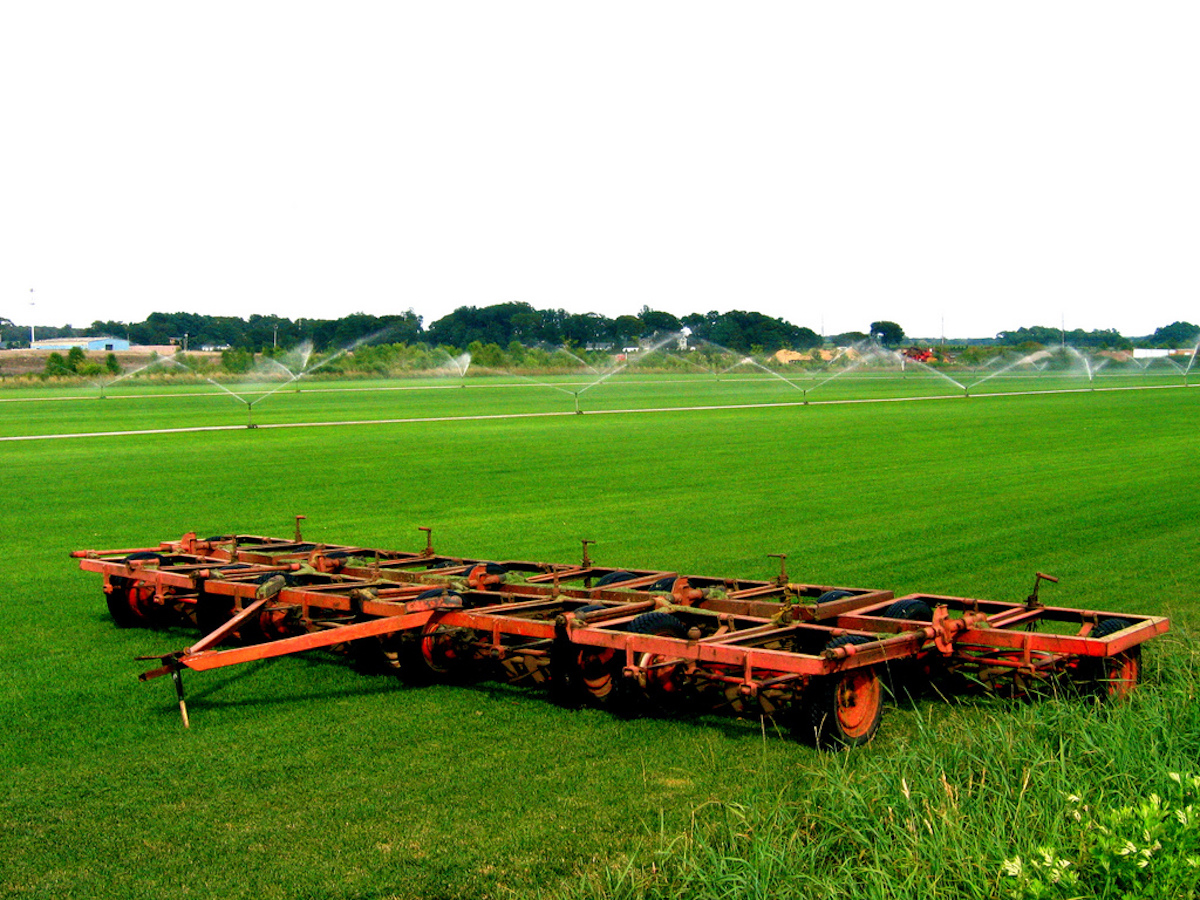 A farm in Long Island, New York (Photo by www.CGPGrey.com)

Editor’s Note: The names of the farmworkers in this article have been changed at the request of the subjects interviewed.

Rosario, a Mexican farmworker who lives in Suffolk County, Long Island in New York, knows firsthand that it is safest to remain silent as an undocumented woman, if you’re sexually harassed or assaulted by your boss.

Four years ago, Rosario was working on a potato farm when her supervisor began following her throughout her shift as she sorted through potatoes moving along a conveyor belt. He would stand close behind her, at times, rubbing up his body against hers.

“I told him he needed to leave me alone. I told him that many times,” Rosario told Latino USA.

But her supervisor felt emboldened. According to Rosario, while taking a bathroom break one day, he cornered her, locking the farmhouse door behind them, and telling her that he would pay her to be with him. That night, Rosario went home and confided in her partner, who accompanied her to the farm the next morning, demanding that the supervisor leave Rosario alone. When she finished her shift that evening, Rosario was notified by a coworker that she had been fired.

“My supervisor didn’t want me working there anymore,” she said.

Title VII of the 1964 Civil Rights Act protects all workers in United States —regardless of legal status— from sexual harassment and discrimination at work. But unlike undocumented farmworkers in states like California and Florida where industrial-scale farms with hundreds of workers have seen legislative and organizing victories that address sexual harassment, New York farmworkers tend to be isolated, working on remote family-run enterprises often with fewer than 10 employees. In the midst of the nationwide #MeToo movement against sexual harassment, many low-wage workers from tomato pickers to house cleaners have spoken out against abuses, but New York farmworkers who labor in the fields of a $5.7 billion industry have remained in the shadows.

When an undocumented farmworker sets out to report a case of harassment in New York, she has an army of institutions and people positioned against her. Without papers, an undocumented farmworker cannot easily contact the local police, who have increasingly become known for collaborating with immigration agents, particularly near the Canadian border. Nor can she legally apply for a driver’s license in New York, and so her interaction is often limited to the other workers on the farm. Many of New York’s estimated 60,000 to 100,000 farmworkers migrated from Mexico, Guatemala, and El Salvador to work off of remote highways in the apple and cherry orchards, potato fields, and dairy farms that dominate New York agriculture. (There is a shortage of demographic data on New York farmworkers, but one study found that over 80 percent speak Spanish as their primary language.) On these farms, Latino men vastly outnumber women, and supervisors, contractors, and other workers engage in a culture of degradation towards women, while farm owners who are typically non-Spanish-speaking U.S. citizens remain unaware or indifferent.

“When you are an undocumented farmworker, you have very little resources,” said Fabiola Ortiz, a doctoral candidate at Syracuse University who studies New York dairy farmworkers. “Maybe you don’t know the language well. Maybe you’re new to New York and you don’t know where you are.”

Yesenia, a 35 year-old undocumented farmworker from central Mexico, has planted onions and cabbage, quartered apples, picked and packed tomatoes, and washed potatoes since coming to the United States in 2005.

“We feel we have to endure sexual abuse instead of reporting it,” she said. “If we report it, the police will ask you ‘do you have documents? How did you arrive here?'”

After escaping a husband who beat her and threatened to report her to immigration authorities if she left him, Yesenia found work on a potato farm in western New York, where her supervisor routinely taunted her for being a single woman in front of her male co-workers.

“There were lots of different shapes of potatoes, and one day my supervisor found a potato that looked like a woman’s vagina. He grabbed the potato and started licking it. After that, he found a potato shaped like a penis and threw it at me,” Yesenia said. Then he told her, “This is for you, because you don’t have any, and maybe you need it,” referring to her single status.

For five years, she “put up with it,” staying quiet for fear of being deported if she drew attention to herself. But eventually, Yesenia and another woman, who had been slapped by the same supervisor, complained to their boss. Both of them were fired.

In the rare instances that a victim of harassment on a farm contacts an attorney, it’s likely that she will be turned away because she missed the respective 300 and 360-day windows for reporting sexual harassment set by the Equal Employment Opportunity Commission (EEOC) and the Department of Human Resources (DHR). In addition, these cases can be difficult to win, so attorneys also often reject so-called “he-said/she-said” cases.

“You have to be really picky about the cases you pick. You don’t want to lose the case. You don’t want any grey area,” said Carly Fox, a farmworker organizer at the Worker Justice Center.

Fox added that New York state desperately lacks funding and legal resources for undocumented agricultural workers. “There aren’t a lot of lawyers in the private bar who take these cases, or speak Spanish well enough to have clients.”

Many undocumented women simply can’t get away from the farms where they work and live–particularly in the expanse of New York farmland that falls within 100 miles of the Canadian border, where both Immigration and Customs Enforcement (ICE) and U.S. Border Patrol agents work, and immigrant detentions have increased since September 11, 2001.

“You can imagine some of these north-country farms, where people can’t leave the farm, so they have someone bring their groceries in,” Fox said. “They don’t have driver’s licenses, so they’ll never leave the farm. There’s no safety go to law enforcement if they’re sexually harassed.”

Tight living quarters also lend themselves to sexual predation. On Long Island potato and nursery farms, men and women pack into rundown farmhouses, often on the owner’s property. They are usually forced to share bedrooms. In western New York, many farmworkers live together in trailers, sometimes with leaky roofs or broken amenities. The Department of Human Resources currently has an open case with a farmworker who was having her underwear stolen by a co-worker.

“One of the biggest problems is overcrowding. In farms where you have high turnover, all the sudden women find themselves living with six other guys who they don’t even know,” said Ortiz, the doctoral student at Syracuse.

Discrimination against undocumented women on farms begins in the hiring process, and pervades every part of work. Carmen is 46 years old and a single mother from Morelos, Mexico. She says that many farms in New York, unlike Florida where she previously worked in the tomato fields, refuse to hire women.

“They much prefer men. If I go to a farm alone as a woman and I ask for work, they won’t give it to me, because they think I won’t be able to do the job,” she said.

Eventually, Carmen found work at an apple orchard south of Lake Ontario, where she picks six to seven boxes of apples a day, earning around $20 per box plus a $2 bonus per box bonus if all of the apples are un-bruised and retain their stem.

On many farms, according to farmworker accounts, women exchange sexual favors for more hours or better shifts, because they often receive lower pay than their male counterparts. At a “know-your-rights” training in Wayne County, NY, Fox, the organizer from Worker Justice Center, explained to an audience of undocumented farmworkers that women cannot be paid less than men for the same work, and one worker raised their hand and said, “Well, then we can sue every farmer in this county.”

The Battle in New York

In 2017, it is rare to find U.S. citizens who are willing to work as farmhands in New York, or any other state given the low wages, lack of rights and benefits, and dawn-till-dusk shifts in the bitter cold or sweltering heat without breaks. Since World War II, the only populations willing to work the fields and farms of New York have been migrant laborers—West Indians, Jamaicans, Puerto Ricans, Mexicans, Central Americans, and Africans Americans from the South. In a compromise by FDR to appease Southern Democrats in the 1935 National Labor Relations Act, farmworkers were excluded from right to organize and form unions without retaliation. As part of sweeping 1930s labor reforms, these farmworkers were denied guarantees to disability benefits and overtime pay, and employers are not required to grant workers a day of rest-rights afforded to workers in almost all other industries.

New York farms are not held accountable to follow any standard heat or pesticide monitoring requirements. Up until 1996, New York farmworkers did not have the right to drinking water in the fields, and not until 1999, did the state require farmworkers be paid the minimum wage. While progressive states like California, Colorado, Maine and Oregon have overturned many of these draconian laws, in New York, organizations like the Rural Migrant Ministry have waged a 30-year battle to win collective bargaining rights for farmworkers, but strong opposition from the pro-farmer lobby in Albany has barred a legislative victory.

The prevalence of sexual harassment in a workplace is usually linked to women’s economic subordination to their male bosses. New York farms are no exception. On farms, sexual harassment goes hand-in-hand with the lack of rights most farmworker women have as women, immigrants, and agricultural laborers. Ending sexual harassment, advocates noted, will not only mean improving mechanisms for women to safely report these events, but also demanding increased legal rights for immigrants, as well as improved working conditions and higher wages for all farmworkers.

“Sexual harassment is a workplace issue and we need to address it as such,” said Fox. “If it’s happening to women with a lot of privilege, it’s got to be really awful for women who don’t have a lot of resources.”

One thought on “A Sexual Harassment Nightmare in Rural New York”