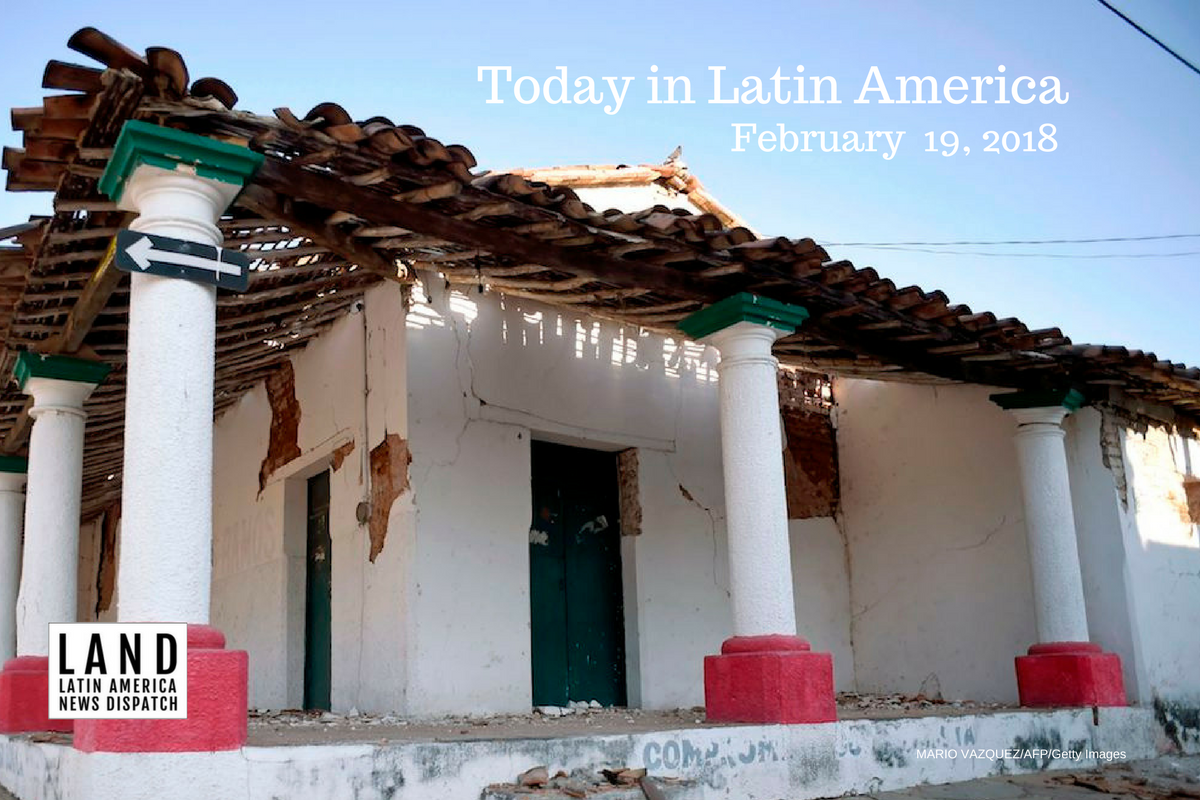 View of damaged buildings after the 7.2 earthquake at the Pinotepa Nacional community, Oaxaca state, Mexico, on February 18, 2018. A 7.2-magnitude earthquake rattled Mexico on Friday, causing little damage but triggering a tragedy when a minister's helicopter crash-landed on the way to the epicenter, Oaxaca, killing fourteen people, including three children, on the ground (ALFREDO ESTRELLA/AFP/Getty Images)

After lying dormant for way too long, Today in Latin America is back with renewed energy and a new logo.

Every morning we’ll bring you a summary of the most important news from around Latin America and the Caribbean, right to your inbox, so you can stay on top of everything that’s going on in the hemisphere.

Our parent project, Latin America News Dispatch, or LAND, is also back. The website got a beautiful facelift, and we will be publishing original reporting from across the region.

We’re sorry for the long silence and appreciate your support.

U.S. immigration authorities announced Friday that days of aggressive raids in California, the country’s first “sanctuary state,” had resulted in 212 arrests and 122 notices of business inspection. The raids came as various immigration reform proposals collapsed in Congress last week. With protections for so-called Dreamers set to expire on March 5, the White House has continued to demand major concessions from Democrats, including increased border security and restrictions to legal immigration.

A 7.2-magnitude earthquake struck Mexico on Friday causing no deaths, but a military helicopter carrying officials to survey the damage crashed into a field in Oaxaca where residents had gathered for safety. Passengers, including Interior Minister and Alfonso Navarrete Prida and Oaxaca Governor Alejandro Murat, sustained only minor injuries but the crash left a death toll that on Sunday rose to 14. Local officials had asked for emergency assistance for the state of Oaxaca, which was already recovering from a devastating quake last September.

Amid mounting criticism over the cover up of alleged sexual misconduct in post-earthquake Haiti by Oxfam staff members, Chief Executive Mark Goldring publicly apologized Sunday, in a Daily Mirror op-ed. On Friday, Haitian Minister of Planning and External Cooperation Aviol Fleurant had suggested that Oxfam could be expelled from the country, pending ongoing investigations. In the days leading up to Fleurant’s threat, Goldring had defended his organization from “out of proportion” attacks.

The head of Honduras’ international anti-corruption panel stepped down Friday, explaining in a public resignation letter that his team had been abandoned by the OAS amid rising hostility from the Honduran government. Juan Jiménez Mayor, a former prime minister of Peru, told El País Sunday that he had felt particularly undermined by OAS Secretary General Luis Almagro, who has refuted some of Jiménez’s claims and announced Ana María Calderón as a temporary replacement.

Colombia’s Supreme Court has opened an investigation into former president Álvaro Uribe, on suspicions that the now-senator manipulated witness testimony, Semana magazine reported Saturday. Uribe had filed suit before the court alleging that leftist Senator Iván Cepeda, a longtime political opponent, had bribed jailed paramilitaries to testify against Uribe and his brother, who currently faces charges for leading a right-wing death squad. During the course of its investigation, however, the court reportedly became convinced that it was in fact Uribe who had conspired to present false testimony against Cepeda.

Bolivian authorities say that dynamite caused the two explosions that killed 12 people and injured 60 during Carnival, not gas canisters, as was originally thought. According to Interior Minister Carlos Romero, investigators now believe that the explosions, which took place on separate days in the southern city of Oruro, were linked, though police are still searching for possible suspects.

Less than a day after ordering the Brazilian army to take over security in Rio de Janeiro state, President Michel Temer signed another decree Saturday that would create a centralized public security ministry to “combat crime” throughout Brazil. The decrees are expected to be approved by Congress later this week and could delay a long-awaited vote on the Temer administration’s proposed pension reform, which seeks to amend the constitution to reduce public benefits for seniors.

Pope Francis named new members to a lapsed sex abuse advisory commission Saturday, in response to widespread criticism over his handling of an alleged Church cover up of child abuse in Chile. The move comes as a key whistleblower prepares to give testimony to Church officials investigating Bishop Juan Barros, who pope Francis defended during a recent trip to Chile, despite accusations that Barros witnessed and ignored sexual assault by a disgraced former clergyman.