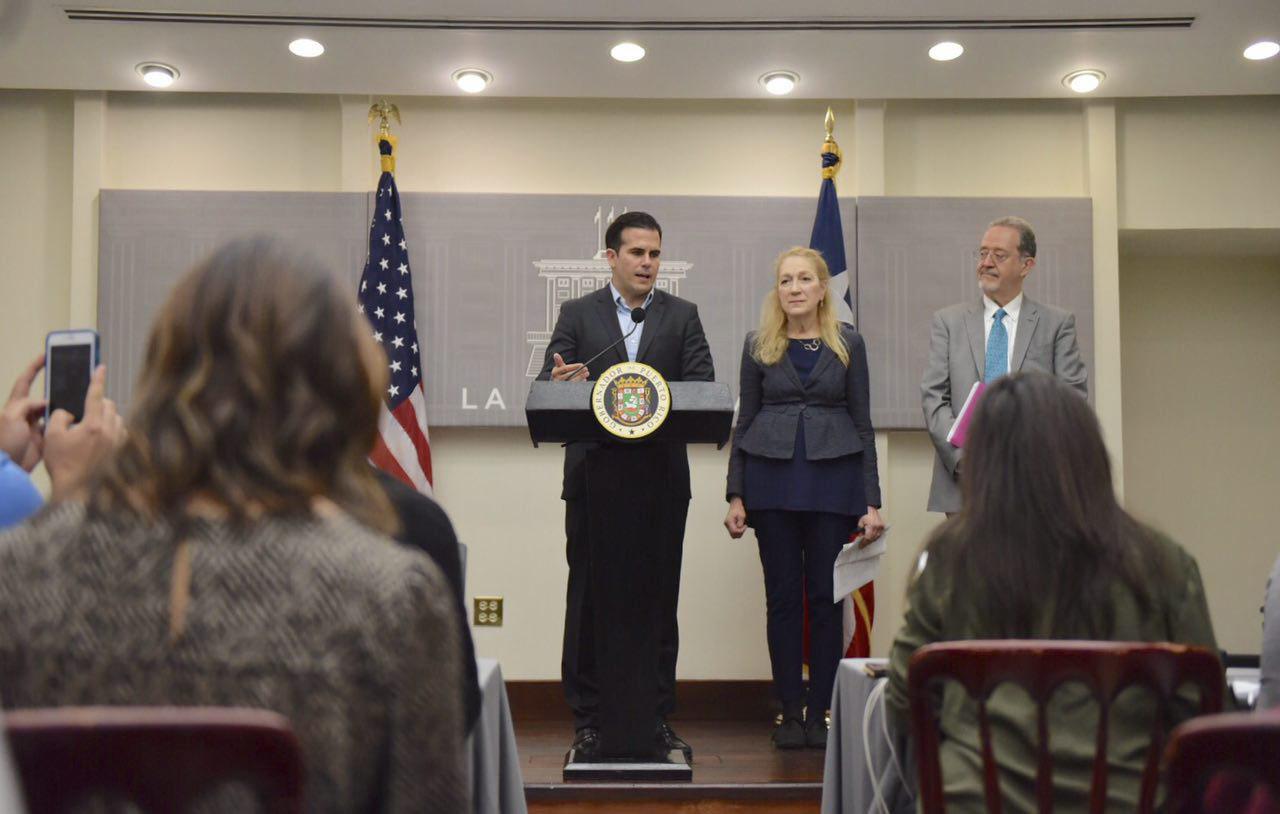 In collaboration with the Center for Investigative Journalism

SAN JUAN, PUERTO RICO — After five months of defending his process to document the deaths caused by Hurricane María in Puerto Rico, Secretary of Public Security Héctor Pesquera was silent on Thursday, remaining mostly seated in a chair during a press conference where governor Ricardo Rosselló reassigned the responsibility of recounting to a group of public health experts from the Milken Institute School of Public Health at George Washington University.

The governor, who has defended Pesquera unconditionally throughout the process, changed coursed and announced that in addition to the recount, the GW group will create an “objective” and “independent” study that will provide the government tools to prevent deaths in future hurricanes and recommendations to adapt the documentation processes of these fatalities. The two initial objectives of the GW group are to evaluate the processes that were used to document the deaths linked to María and to produce a new estimate in line with modern standards for reporting.

“Today we are proud to announce a collaboration with the University of George Washington, the Milken Institute, to collaborate with the government of Puerto Rico in order to assess and to further advance the science of estimating what the death toll, the possible death count, after the storm and after a devastating event like this, is,”  Rosselló said in English at the bilingual press conference.

Rosselló’s decision delayed the publication of a much-anticipated death recount report until May. That request to produce a report was initially assigned to Pesquera in December. In early January, however, an executive order said that the report would be originally published in March.

The new group, which will headed by epidemiologist Carlos Santos-Burgoa, will create a “completely independent” study, according to the GW team. The report will scientifically document the excess deaths in Puerto Rico after Hurricanes Irma and María. It will also examine the death documentation processes used by Puerto Rico’s government agencies and the Centers for Disease Control and Prevention (CDC), a federal agency that provides the local government with guideline that are consistent with the standards in the United States and other international entities.

“Yes, there are many challenges. We are taking on this study several months after the event passed,” Dr. Santos-Burgoa said in response to media questions about how difficult it will be to begin a study at this stage.

When asked why the official death toll of 64 María deaths has been so low and if his administration was being pressured to keep that figure low, Rosselló insisted that there has been “no pressure to keep the number as is.”

“There was a public policy decision that was taken, that we would get the experts involved,” Rosselló said, “and that we needed to find those experts in an independent manner to evaluate the ongoing process. There is going to be a process whereby a lot of these other factors were not taken in directly in the protocol that we had, will be taken in.”

The governor was accompanied on stage by Santos-Burgoa and Dr. Lynn Goldman, dean of the Milken Institute School of Public Health. All three said that that from now on, the government of Puerto Rico will not interject in the process until the GW findings are disseminated and are made public.

“We have complete academic freedom. We will conduct this study with complete integrity. We will call it as we see it. That I promise you,” Goldman said.

According to their biographies, Goldman is an epidemiologist and has extensive experience in public health policy, particularly on the issue of pesticides. Santos-Burgoa is a public health expert on issues of equity and environmental risks in Latin America. When asked about who on the GW team has experience in mortality studies during natural disasters, Santos-Burgoa did not specify who, but said that there is experience on the team.

The study’s first phase will begin immediately and last three months. During this phase, which will cost the government of Puerto Rico $305,000, the GW team will analyze vital statistics from the island’s Demographic Registry and will publish a preliminary report with an estimate of excess deaths caused by Hurricanes Irma and María. The estimate will cover data between September 1, 2017 and February 28, 2018.

At the same time, according to Goldman and Santos-Burgoa, the GW team will identify cases to investigate in a second phase of the study. This would consist of interviews with relatives of the deceased or places like funeral homes and hospitals that might shed light on what caused a death. This second phase would take nine months to complete and would cost $1.1 million. It would also include GW recommendations to the government about what to avoid the next time a hurricane strikes the island and how to modify the documentation of deaths during natural disasters, with the goal of correcting problems in the current system. The funds needed for this second phase have yet to be identified, but Rosselló said that the entire GW study would be completed. The GW team added that it was looking into possible alternative funding sources for this second phase.

Goldman noted that the GW team was in conversations with the University of Puerto Rico’s School of Public Health with the goal of collaborating on the study.

The Rosselló announcement is the first time the government has assigned the analysis of hurricane-related deaths to independent public health and scientific experts. Since María devastated the island on September 20, 2017, reports by the Center for Investigative Journalism (CPI), in partnership with outlets like Latino USA and Latino Rebels, have chronicled stories of undercounted deaths. The CPI has maintained that the death count was being severely undercounted, especially during the first few weeks after María, when the official death count was at 16. CPI’s reports indicated that the death count could have possibly been in the hundreds, as stories of lost power, lack of health access and transportation problems become public.

Based on interviews with epidemiology and public health experts, the CPI also chronicled the complex task of documenting deaths during the island’s state of emergency.

In November, the CPI published its first analysis of uncounted deaths, and on December 7, using public health data, it reported than an excess of 1,000 deaths occurred in September and October of 2017, when compared to the same time period in 2016. On December 8, The New York Times published its own analysis.

Since those reports, Latino USA has been in constant contact with the Puerto Rican government for updates to the death count. As of January 4 (the last update Latino USA received), there were 1,194 more deaths in September and October 2017 combined when compared to 2016. September 2017 and October 2017 were the two months with the most deaths in Puerto Rico for the last three years.

In the past, Pesquera has characterized the investigations published by the CPI and other local, national and international media as “fiction” and insisted that epidemiologists were not needed for his analysis because “there was no epidemic” in Puerto Rico.

At the Thursday press conference, the governor, as well as Goldman and Santos-Burgoa said that the GW team will immediately begin the study and that Pesquera’s department will be limited to facilitating the GW team’s data needs from respective government agencies in Puerto Rico.

The CPI requested clarification from Rosselló’s press secretary Yeniffer Álvarez and Public Security press secretary Karixia Ortiz, as to whether this means that Pesquera is no longer the lead of the death recount process. Both said no.

“Pesquera continues leading the effort and coordinating. The scientific analysis is delegated to the George Washington University,” Álvarez said, noting that the validity of governor’s January 4 executive order will be extended to give the GW scientists 90 additional days.

It was not clear what the Pesquera team specifically produced in the more than two months it was in charge of the recount, nor whether that work will be made public. Álvarez was asked what will happen with the work done by the Pesquera group. She indicated that that the data collected so far will be shared with the GW team.

The governor’s January 4 Executive Order (2018-001) assigned Pesquera —in coordination with the Demographic Registry and the Bureau of Forensic Sciences— to establish a procedure that would review the deaths that occurred after Hurricane María and determine which post-storm deaths were related to the hurricane or not. Pesquera never explained what this procedure would be despite multiple requests from the CPI.

Special thanks to NPR’s Adrián Florido for providing the full audio of the Thursday press conference.