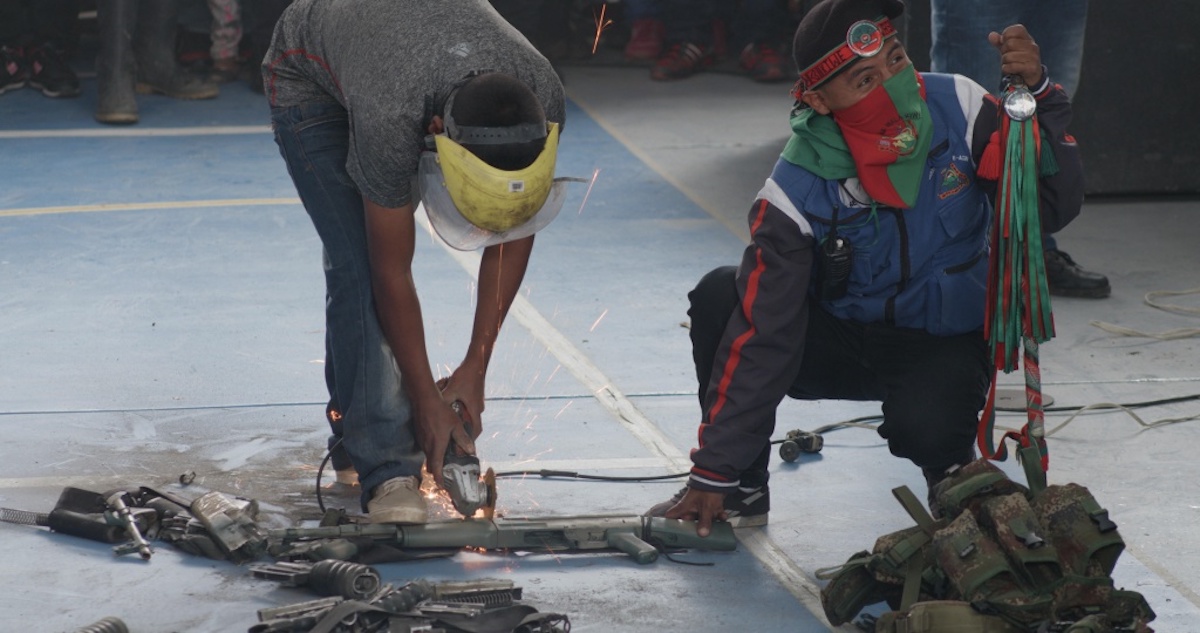 Members or the Guardia Indígena destroying weapons on February 11, 2018 in Tacueyó. (Photo by Nemo Allen)

TACUEYÓ, Colombia — Sparks flew into the air from a drill saw struggling through confiscated machine guns. On February 11, hundreds of people gathered for a community assembly in Tacueyó, Cauca to witness the weapons destruction ceremony. Indigenous leader Jaime Díaz proclaimed before the spectators, “Today, just as always, we will not allow any armed actors in our territory.”

In Colombia’s southwestern state of Cauca, many indigenous communities have been contending with violence for generations, living in the crossfire of numerous rebel guerrilla groups, state forces and right-wing paramilitaries. In the summer of 2016, the Colombian government signed a peace accord with the largest and oldest rebel organization, the FARC— Revolutionary Armed Forces of Colombia— a symbolic step toward ending the country’s 53-year armed conflict. But the public voted against the agreement in October of the same year, and the revised peace process has faltered, leading to new tensions that have left many communities as vulnerable as they were in the heat of war. A report by the Bogotá-based Institute of Studies for Peace Development, INDEPAZ, concluded that 170 human rights leaders were killed in Colombia in 2017, with the highest concentrations in Cauca.

Presidential candidate and former mayor of Bogotá, Gustavo Petro, arrived to Tacueyó several days before the assembly to speak about his campaign and proposals to finally stem the violence. “Every time one war ends in these lands, not a week nor a month, let alone a year passes before a new war is beginning,” he said. Petro arrived at the behest of Cauca’s indigenous movement, a nonviolent resistance effort by at least 100,000 people, which since the early 1970s, has sought to recover ancestral land and cultural sovereignty. Seated at a table among a group of indigenous leaders, he wore the red and green bandana of their organizing body, the CRIC, or Regional Indigenous Council of Cauca. His speech acknowledged the movement’s peaceful tactics through the conflict: “These are the geographic areas and communities that, for 30 years, were testimony and protagonists of peace after having lived the vicissitudes of war.”

The day before Petro’s visit, a new confrontation had broken out between dissidents from the FARC, who broke away from the peace process, and members of the CRIC’s nonviolent civilian defense network, the Guardia Indígena. Tacueyó is an indigenous resguardo or reserve, where land is collectively owned and native council authorities govern independently from the Colombian state—an organizing structure that supports bottom-up community protection. On Feb. 7, members of the Guardia were conducting their local patrols when they came upon a truck holding multiple machine guns, stockpiles of ammunition, and a grenade. Upon confiscating the weapons, ten combatants from a FARC dissident group called the FARC-FARC entered Tacueyó to retrieve their lost property, armed and ready to retaliate. The Guardia swiftly reported the situation over their walkie-talkies, and within the hour, hundreds of people from town had encircled them. The collective action affirmed what has been the indigenous movement’s posture of neutrality throughout the conflict; they extricate themselves from the war by not participating in armed struggle, but mobilize to forbid any group’s violent rule within their territories.

Beginning in 2015, when the peace negotiations led to a ceasefire between the FARC and the government forces, a period of relative calm settled in Tacueyó and its surrounding areas. But many people worry that what politicians have labeled “the post-conflict” has generated more struggles than it has resolved. Ezequiel Vitonás served as mayor of Tacueyó’s municipality, Toribío, between 1997 and 2000, some of the most violent years of the war. By Vitonás’ count, guerrilla forces took over Toribío more than 60 times during the conflict, with over 1,000 shootouts between rebels, police, and military personnel. Observing the evolutions of the war, Vitonás attributes the latest violence to failures in implementing the peace accord.

“The guerrilla complied and arrived to these areas, but the government did not hold up its end of the deal,” Vitonás said in an interview. The peace agreement established a pathway for members of the FARC to demobilize and re-enter civil life after remaining in UN-monitored “transition zones,” where they would disarm and receive protection from paramilitary retaliation. When the Colombian public voted “no” for the accord in a plebiscite, congress subsequently revised the document, yielding to the political right, who advocated a more punitive approach to handling the ex-guerrilla. Many concessions to the FARC, such as clemency guarantees, were eliminated. “So they [the guerrilla] suggest that it’s as if there was no accord, and from there, dissidents started leaving.” Vitonás described the deplorable state of the transition zones, many of which lack adequate shelter and sanitation for the demobilized guerrilla. A report by the International Verification Commission on Human Rights found that the Colombian government has not executed over 80% of the accords.

Further heightening resentments, the peace process was supposed to secure protection and political participation for the FARC, but earlier this month, the group announced that its commander Rodrigo Londoño—better known by his alias, Timochenko—would stop campaigning for president in response to a series of mob attacks. Part of the peace deal allowed the former guerrilla group to become a political party, and they have since rebranded themselves the Revolutionary Alternative Force of the Common People. They demanded security through the transition—a request motivated by historical precedent; in 1985, after an earlier peace process, the FARC formed a political party called the Patriotic Union, or UP. Thousands of its members were systematically killed during the years that followed in an effort to wipe out the left. Many of the UP victims had never participated in the guerrilla, only agreeing with its social proposals rather than armed struggle. Now that the FARC’s entry into politics is again facing violent opposition, the parallels have stoked disillusionment and anger.

This backdrop has led many members of the FARC to opt out of the peace process altogether. Some left because of disappointments, others chose not to participate since the outset. In either case, the Colombian government considers these people “dissidents”—criminal individuals rather than members of a politically-driven guerrilla. Most of them have either absorbed into other rebel groups or formed new factions.  The resulting balkanization has made defense strategies for communities in the area more complicated. “It was easier before,” current governor of Toribío, Sifredo Bavi, said. “We only had the one guerrilla; now, there’s no way of knowing who’s who.” There are currently eight separate armed groups in the municipality, some of which have as few as 15 people.

Through the shuffling of allegiances, tensions are escalating over leadership and belonging, generating internal disputes. Upon evacuating their former strongholds to enter the transition zones, the FARC left a power vacuum, which different armed networks are now struggling to fill. Many of these areas are aligned with narcotics money. In January, six people were massacred in another indigenous resguardo just three hours south of Tacueyó called Cerro Tijeras. Narcotrafficking interests have motivated many people to split off from the demobilization process, reluctant to cede power and profit, which belonging to the guerrilla had secured for them.

Meanwhile, Colombia’s second largest guerrilla group, the National Liberation Army or ELN, have compromised their own peace negotiations after carrying out a wave of attacks. A year ago, the group announced that they would begin formal dialogue with the government to reach a permanent ceasefire. But on Jan. 29, President Juan Manuel Santos called off the talks after the rebel group detonated three bombs in the northern city of Barranquilla. Seventeen police officers died and 47 others were injured. In response to the decision, the ELN declared a national armed strike in mid February, which resulted in 16 violent actions throughout the country, including a public shooting and burned bus less than ten miles from Tacueyó in a town called Corinto.

The events suggest how conflicts are heating up on all sides—not just by ex-guerrilla but paramilitary networks that oppose the peace process for different reasons. Within the past week, a group called the Águilas Negras, or Black Eagles, released a death threat outlining various targets in Cauca: former guerrillas, left-leaning political parties, journalists, community leaders supporting peace initiatives, professors, congressional candidates, and numerous social organizations. The document ends by saying, “Sons of bitches, you have a week to leave Cauca. We will kill you all like rats.” Among the organizations targeted: ACIN, the Association of Indigenous Councils in the North of Cauca, a counterpart to the CRIC that presides over Tacueyó.

A leader from the ACIN who requested not to be named said that these threats are nothing new. Indigenous communities in Cauca have lived through war for generations. “We’re in this resistance no matter what happens. After all, we’ve been doing it for 500 years.”