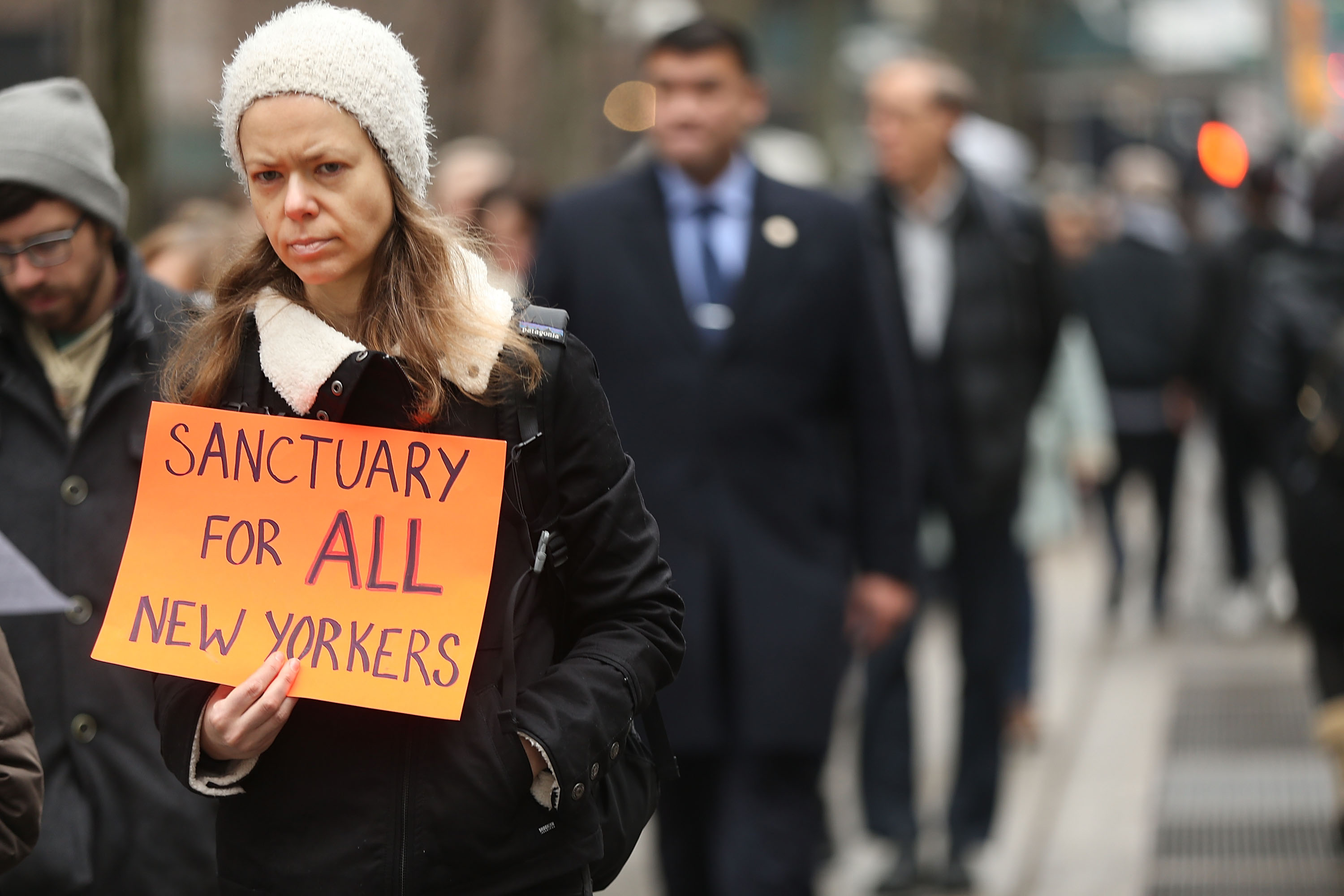 Hundreds of immigration activists, clergy members and others participate in a protest against President Donald Trump's immigration policies in front of the Federal Building on January 11, 2018 in New York City. (Photo by Spencer Platt/Getty Images)

According to the letter, ICE agents attempt to or conduct these operations in criminal and family courts, prompting “widespread fear of the courts in immigrant and mixed-status communities.”

“[ICE agents] are preying on people with documented mental illness, people who are survivors of domestic violence and sexual violence, immigrants who are documented and undocumented, and others from the most vulnerable populations in our state.”

Meanwhile, court officials have pointed out that it is illegal to ban ICE from public buildings.

“There is not one state court system in the country that bars law enforcement from their courthouses,” said Lucian Chalfen, a spokesperson for the state’s Office of Court Administration, via e-mail. “We cannot do that and we will not do that.”

“We will continue to request that [ICE] treat all courthouses as sensitive locations, and will continue to ensure that any activity by outside law enforcement agencies does not cause disruption or compromise Court operations,” he said.

According to the Immigrant Defense Project (IDP), since January 2017 there has been a 900 percent increase in ICE arrests at New York courthouses, with 110 arrests by the end of the year, compared to 11 for all of 2016. In that same study, IDP revealed that 20 percent of people arrested were undocumented with no prior criminal history.

There have been 17 successful and unsuccessful enforcement operations in New York state so far in 2018, about triple the amount compared to February 2017, according to the IDP.

The City Council’s letter condemns ICE’s practice of staking out immigrant in courthouses. In January, ICE announced a new formal policy directive that states their agents should “generally avoid” enforcement actions in courthouses, even though they are “are wholly consistent with longstanding law enforcement practices nationwide.”

Meanwhile, that same policy states some exceptions: those who are accompanying the “target alien” inside the courthouse, like family and friends, or those who are serving as witnesses in a proceeding, will not be subject to enforcement actions.

However, the Immigrant Defense Project says it has evidence provided by public defenders and defendants that they were targeted even under these exceptions. Alejandra López, a spokesperson for IDP, said many defendants now hesitate to appear in court. “The fear is there,” she said.

Chief Judge DiFiore has not formally responded to the Council’s letter, López said, but advocates say there is work to be done. “There are steps that the court can take to protect immigrants before banning ICE,” she added.

Redmond Haskins, a representative of the Legal Aid Society, a non-profit organization that provides legal services for low-income New Yorkers, said that most of their clients are predominantly Latino, and many hesitate to appear in court out of fear of being targeted. “It is an ongoing constitutional issue.”

The New York Civil Liberties Union (NYCLU) has spoken out about this issue in the past. In a testimony before the New York City Council last summer, the NYCLU condemned the practice as a violation of the constitutional right to access to courts, claiming that it “undermines” the due process of law.

“For those who stand accused of crimes, the notion of a fair trial requires that a defendant have the chance to appear in court and confront the witnesses testifying against her,” said NYCLU Policy Council Zachary Ahmad, speaking to the Council. “The promise of due process cannot be realized when individuals are intimidated from availing themselves of the judicial process.”