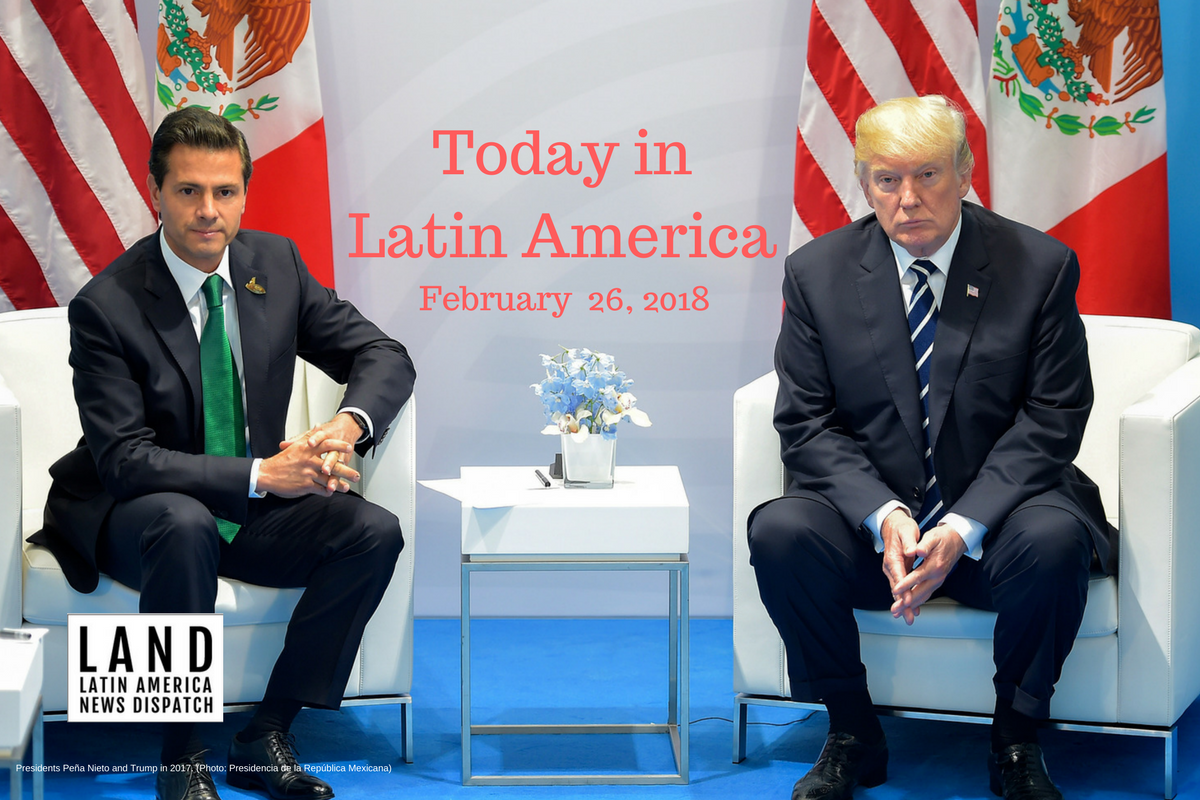 Preliminary arrangements for outgoing Mexican President Enrique Peña Nieto’s first visit to the Trump White House were set aside last week, following a heated 50-minute phone call between the leaders. The Washington Post reported Saturday that the conversation broke down over President Trump’s refusal to assure his counterpart that he would not reiterate a campaign promise to have Mexico pay for a wall along the countries’ shared border. One Mexican official said Trump “lost his temper.” Last August, the Post obtained the official transcript of a previous call between the two leaders, during which Trump, fresh of his inauguration, acknowledged that funding for the border wall had already put his administration in a “political bind.”

In Mexico, the wall has been a charged topic of debate, with former Mexico City Mayor Andrés Manuel López Obrador, the current frontrunner heading into July’s presidential elections, stumping on sharp criticisms of Trump’s proposal. Many Mexicans expressed incredulity that Peña Nieto would even consider a diplomatic trip to Washington, and the latest headlines will do little to help the candidate from the president’s embattled PRI party recover from a sizable polling deficit. As fraught trade talks recommenced Sunday, the abandoned travel plans seem to undermine Foreign Secretary Luis Videgaray’s recent claims that the U.S.-Mexico relationship has grown “closer” since Trump took office.

A bust of Orlando Letelier was unveiled along Washington, DC’s Massachusetts Avenue Sunday, not far from the spot where the former Chilean ambassador was killed in a 1976 car bombing. Documents declassified under the Obama administration confirmed that Chilean dictator Augusto Pinochet personally ordered the bombing, which also killed one of Letelier’s U.S. colleagues.

The National Commission on Human Rights warned Sunday of the “possible collapse of the protection system for refugees in Mexico.” Of the 14,596 asylum applications received last year, less than 40 percent were attended, according to the state-sponsored commission. Some 2,400 were abandoned outright, due to prolonged waiting times and a lack of transparency.

State authorities in Jalisco, Mexico arrested four municipal police officers Saturday on charges that they collaborated in the kidnapping of three missing Italian citizens last month. According to Jalisco Attorney General Raúl Sánchez, the officers, stationed in the town of Tecatitlán, “confessed” to detaining the foreigners and handing them over to a local organized crime group, possibly the Jalisco New Generation cartel.

Five people were killed and one injured, following a weekend shooting in Comerío, Puerto Rico, a town southwest of San Juan. According to witnesses, a group of men pulled up in a vehicle around midnight Saturday and began firing at a crowd of people. In the aftermath of Hurricane Maria, police officers have begun calling in sick to protest missing overtime paychecks, making it difficult for the cash-striped territorial government to control crime.

Panamanian police have been called on to intervene in an escalating legal dispute between the Trump Organization and the majority owner of the the Trump International Hotel Panama, according to several weekend reports. On Thursday, the majority owner attempted to evict the Trump Organization’s management team from the premises, claiming that the President’s brand has hurt revenue and occupancy. According to the Associated Press, witnesses say that management responded by locking itself in a glass office, deploying private security and shredding stacks of documents.

Guatemala City Archbishop Óscar Julio Vian, a strident critic of corruption, died Saturday, at the age of 70. Thousands of mourners attended a wake at the Metropolitan Cathedral, including Iván Velásquez Gómez, the head of a U.N. commission tasked with investigating corruption in the country.

Colombia extradited Washington Edison Prado, the so-called “Pablo Escobar of Ecuador,” to the United States Saturday. Authorities allege that Prado, who tried to evade extradition by claiming to belong to the demobilized FARC rebel group, oversaw a sprawling international criminal network that killed judges, prosecutors, and police officers in his native Ecuador and smuggled more than 250 tons of cocaine through Central America to the U.S.

Argentina’s coast guard fired cannons at an illegal Chinese fishing boat Saturday, chasing it for eight hours until it escaped into international waters. No fishermen were injured or detained in the incident, the latest in a series of confrontations with foreign boats operating without permission in Argentina’s vast maritime territory. In 2016, one such incident resulted in the sinking of a different Chinese fishing vessel.

Brazilian prosecutors confirmed Sunday that the Supreme Court has given them permission to review the bank, tax and email records of people and companies involved in a port corruption scandal that implicates President Michel Temer. The investigators elected to divulge the previously secret court order after the federal police director, a Temer appointee, told Reuters that there was no evidence indicating Temer’s involvement and that the investigation, the last one open into the scandal-laden president, might soon be closed.