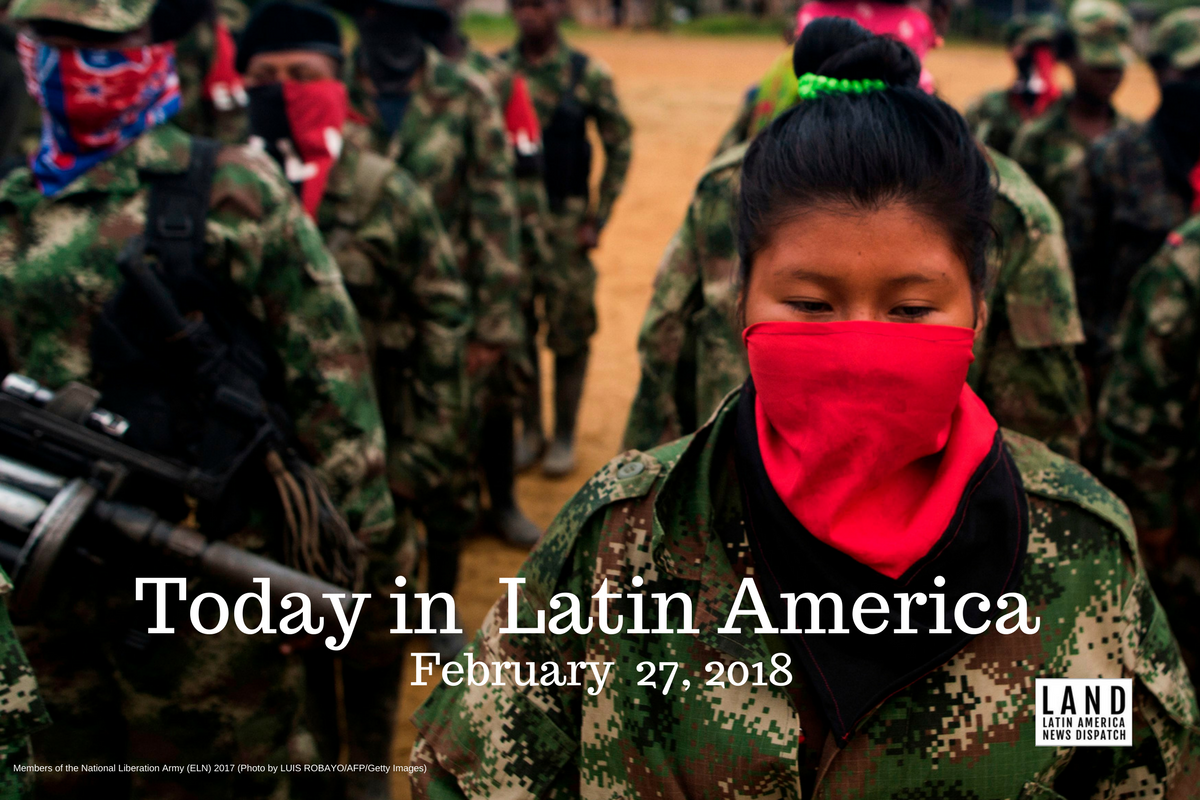 The Marxist ELN rebel group announced Monday morning that it will enforce a four-day unilateral ceasefire during Colombia’s March 11 congressional elections. In an open letter, released on the group’s website and directed to “those who vote,” the central command explained that, while Colombian elections are “corrupt processes,” it elected to hold the ceasefire as a “sign of respect” to the general public. It also urged President Juan Manuel Santos to adhere to a previously agreed upon negotiation schedule, insisting that future talks should prioritize a new, modified bilateral ceasefire.

Santos, who won the 2016 Nobel Peace Prize for his historic agreement with the larger and slightly older FARC rebel group, welcomed the gesture but said he would wait to see if the rebels “back it up with action” before deciding whether to resume stalled peace talks.

Since the expiration of a first-ever bilateral ceasefire between the parties in early January, both the ELN and the government have stepped up military attacks throughout the country. A series of ELN bombings in late January killed seven police officers and injured dozens, prompting Santos to suspend an upcoming round of negotiations in Quito, Ecuador. The following night, the Colombian military killed an indigenous teenager in a retaliatory bombing of a rebel camp.

In Guerrero, Mexico, local pre-candidate for the Institutional Revolutionary Party, Dulce Rebaja Pedro, was killed alongside a relative this Sunday in Chilapa. Four days before, two men shot and killed the local pre-candidate from the competing political party, meaning that in less than a week, two office seekers from this Mexican town have been killed. Chilapa, a town 25 miles east of the state capital of Chilpancingo, is a drug-planting area that for years has been plagued by violence.

The fate of the DACA “dreamers” has temporarily been put on hold due to the fact that the Supreme Court has, in the meantime, rejected the Trump administration’s bid that it decide on shutting down the program that protects some 700,000 young undocumented immigrants. The case will now have to find the approval or non-approval through lower courts before finding any Supreme Court ruling. The idea of bypassing the federal appeals court in general made the appeal unusual.

On Monday, the Caribbean Community (CARICOM) began its 29th Inter-Sessional Summit of Heads of State in Port-Au-Prince, Haiti. Pres. Jovenel Moïse of Haiti opened the two-day conference that seeks to build a more resilient Caribbean in the face of the devastating climatological events of 2017. The meeting will pursue plans to further strengthen key elements of the CARICOM Single Market and Economy (CSME), including those related to travel and trade. The heads of state from all of CARICOM’s member states attended the summit.

Yesterday, U.S. Ambassador to the United Nations Nikki Haley began her official visit to Honduras, where she will be meeting with government officials and civil society leaders to discuss U.S. partnerships on anti-corruption and counter-narcotic efforts. Ambassador Haley will depart to Guatemala tomorrow and return to the U.S. on Thursday.

Since this Monday, Panamanian prosecutors are investigating the Trump Organization, who manage the Trump International Hotel in Panama City. This comes after Miami-based majority owner Orestes Fintiklis, a Cypriot national, complained that he had been unlawfully blocked from his own property by members of the Trump Organization who barricaded the entrance with furniture, The Washington Post reported. As a reaction, the company still owned by the U.S. president issued a statement about the standoff in Panama, accusing Fintiklis and his allies of “mob style” tactics in his attempt to physically take over the hotel.

In a defiant and wide-ranging speech before the United Nations Human Rights Council on Monday, Foreign Affairs Minister Jorge Arreaza denied that Venezuela is experiencing a “humanitarian crisis” and instead denounced the U.S. for coordinating an “imperialist plan” to destabilize the country. President Nicolás Maduro, said Arreaza, is committed to human rights, and will not “permit them to be pretexts and excuses for more violence.”

São Paulo state Governor Geraldo Alckmin announced Monday that, if elected president in October, he would privatize Brazil’s state-run oil company, Petrobas. Currently polling in the single digits, Alckmin has not officially announced his candidacy but is expected to run as a centrist against Jair Bolsonaro, a far-right congressman, and Luiz Inácio Lula da Silva, who is fighting a controversial jail sentence for corruption. Petrobas has long been considered an untouchable state institution, but with mounting budget deficits and a looming bribery scandal involving the company, Alckmin may attempt to make it a campaign issue.