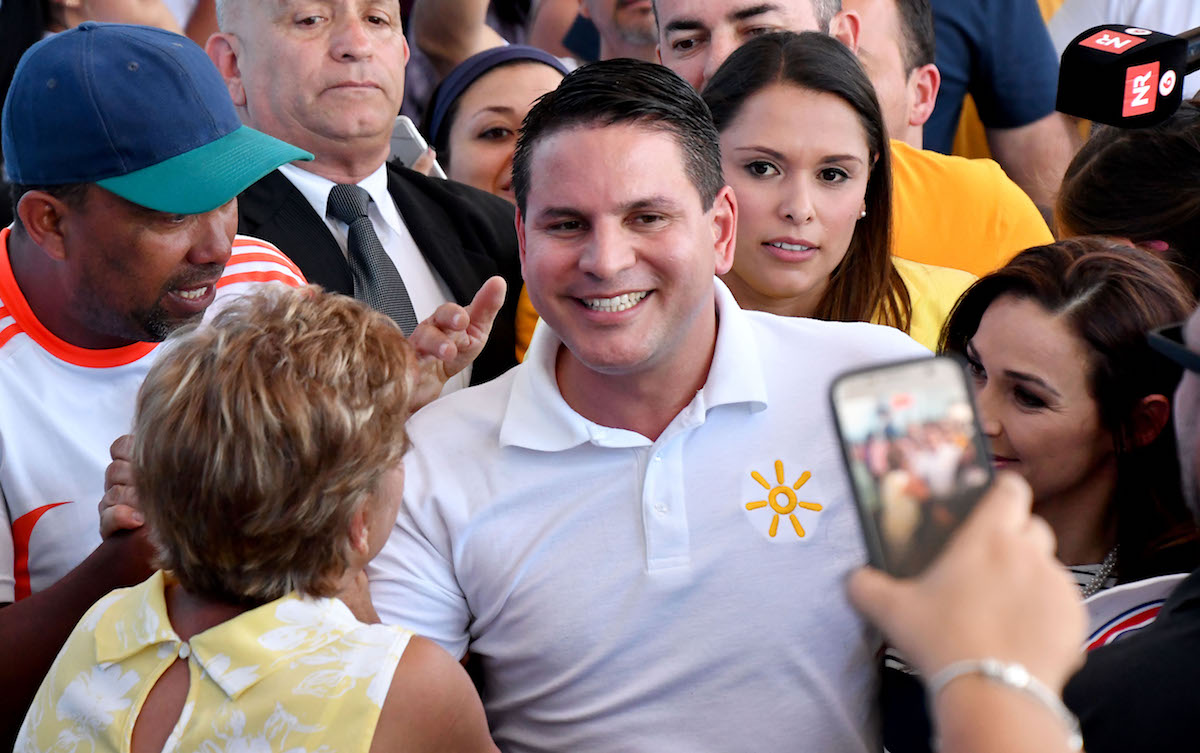 Capitalizing on the discontent against the government of Luis Guillermo Solís, Alvarado Muñoz’s campaign has focused on denouncing the “indifference” of mainstream politicians, as well as exhibiting a fierce opposition to “gender ideology,” what conservative groups in Latin America call the perceived threat of feminist and LGBTQ indoctrination to traditional families.

After finishing on top in the first round of elections with 24.9% of the vote earlier this month, Alvarado Muñoz is one step away to victory and, in his own words, he’s out to show that Costa Rica is “Pro-life, pro-family and pro-marriage between a man and woman.”

Fabricio Alvarado’s popularity, rising from fifth place in December to first in early February, is impressive but hardly surprising.

With an ease for media (he used to be a news anchor) and an imposing personality as a religious leader, his parliamentary position helped him vocally protest many of the social reforms implemented by the Solís government. These include street protests and court battles over sex education in public schools and free medical treatment for trans people.

But the biggest point of contention was the ruling of the Inter-American Court of Human Rights earlier this year, following a national consultation to expand LGBTQ rights.

The Court’s decision that Costa Rica —along with other 21 member states— should recognize the rights of same-sex marriage and the right of trans people to change their legal name and gender was met with celebration in San José, where activists gathered at the city’s Fuente de la Hispanidad after two years of legal battles.

At the same time, the decision also unified the country’s religious conservatives to rally behind a single candidate.

For Sánchez, Alvarado Muñoz is someone who is solely defined by what he opposes. “We don’t know what he thinks about education, public infrastructure, the economy and environmental protection.” As an example, Sánchez points out the candidate’s government platform.

The first chapter, titled “Social Christianity: An Ideology for Everyone,” is dedicated to calm any concerns about religious impositions, assuring that Restauración Nacional is a “political party of Christian foundation but is not ‘religious’.”

According to a state initiative focused on studying government programs and performance, 53% of the document doesn’t have a single proposition, and only 1% includes clear quantifiable goals.

But probably the most troubling effect about Fabricio Alvarado is the impact of his campaign on Costa Rican society and economy.

Hate crimes against LGBTQ people have been on the rise in the country. Human rights activist Michelle Jones informed Latino USA of 18 cases of attacks against LGBTQ people since the first round of elections: five assaults, three physical threats and 10 verbal attacks. Two queer teenagers have also been reported taking their own lives.

On February 9, when the school year was set to start, a group of parents protested the new school curriculum. With the motto, “I teach my kids,” they blocked the entrance of 20 schools for two days, not letting over 2,700 students attend lass and accusing educators of “promoting homosexuality and sex.”

For Sánchez, there are also repercussions from abroad.

“We’re a country that competes with the international market because of our education, or environmental policies, our political stability, and our respect for human rights,” he said, adding that Costa Rica’s democratic and tolerant reputation are now at risk “because of everything that have happened during this election.”

On April 1, Alvarado Muñoz will face Carlos Alvarado (no relation) in the second round of elections. Even if Alvarado Muñoz loses, his party has now gone from a single deputy, himself, to gaining 19 out of 57 seats, becoming the second largest faction in the Asamblea Legislativa.

Nonetheless, Sánchez wonders if a less tolerant side of Costa Rica has been revealed< he also wonders whether it will be too late for it to disappear. Alvarado Muñoz and his campaign has hurt what Sánchez calls the “Pura Vida Pact,” the unspoken agreement that in a diverse country, differences are respected, and values like peace, solidarity and human rights have always been defended and never compromised in Costa Rica’s history.