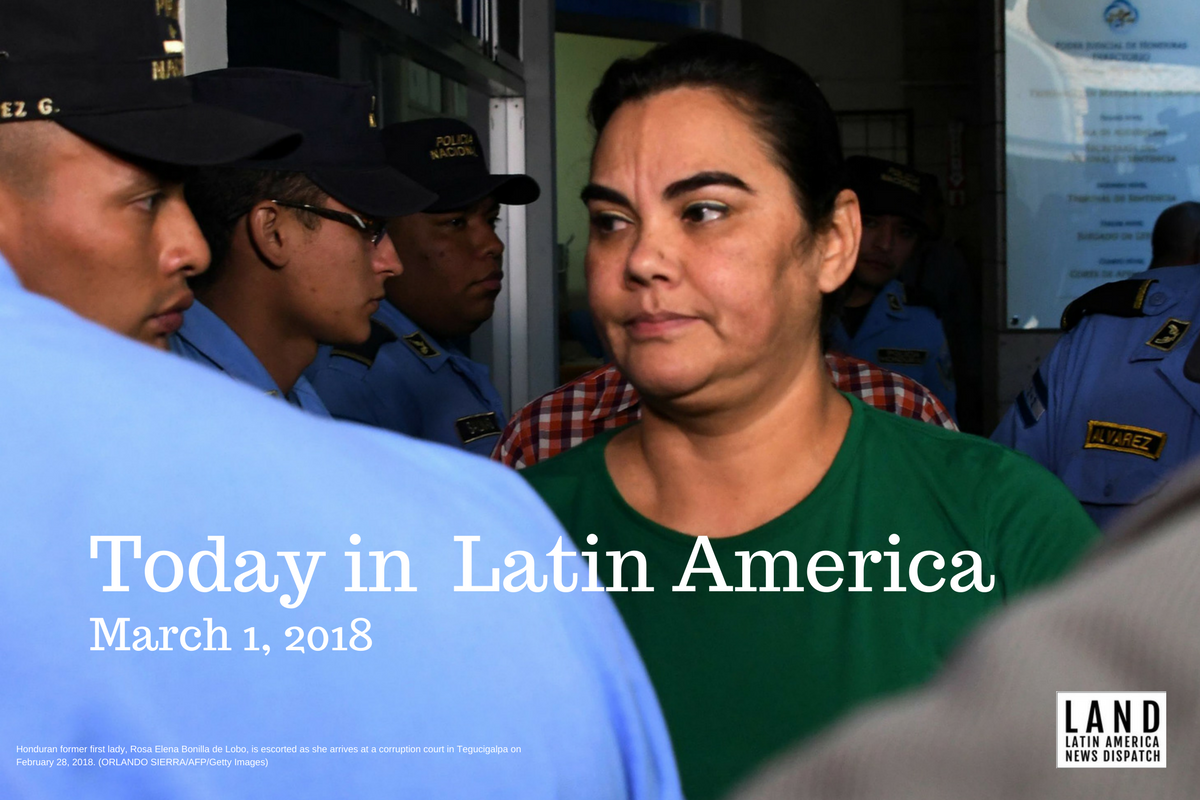 Honduran former first lady Rosa Elena Bonilla, wife of ex-president Porfirio Lobo, was arrested in her home by military police yesterday, on embezzlement allegations. According to investigators for the National Anti-corruption Council, Bonilla, 48, deposited over half a million dollars of state funds into her own bank account in January 2014, at the end of her husband’s presidential term. Bonilla’s brother-in-law Mauricio Mora was also arrested under alleged corruption charges. Authorities did not mention if Lobo was present during the home search.

According to the Associated Press, corruption cases involving Honduran public officials rarely end in convictions. Bonilla’s arrest comes less than two weeks after the leader of the anti-corruption panel Juan Jiménez Mayor stepped down, citing that he had been abandoned by the OAS amid rising hostility from the Honduran government.

President Trump said on Twitter yesterday he would delay border wall construction efforts that California “wants built NOW” until the entire wall is approved. California officials have actually fought against the wall in court, but a judge in San Diego sided with the federal government on Tuesday allowing the construction of the barrier.

Tensions increased between ICE and Oakland mayor Libby Schaaf as she alerted residents of possible immigration raids that were going to be conducted in the area. Mayor Schaaf’s warning comes after more than 150 people have been arrested from previous federal sweeps in the region.

Two private Jamaican flour companies filed a complaint to the national Anti-Dumping Commission over flour-dumping from Trinidad and Tobago into the local Jamaican market. “Dumping” a commodity means selling it in a foreign market for less than it costs to produce it in that market.

Guatemalan ex-president Álvaro Colom defended the actions behind the multi-million dollar public transit deal for which he was arrested earlier this month on corruption allegations. Prosecutors claim that the Guatemala City bus concessions were flawed and defrauded the government. Colom insists that upgrades to the buses were necessary to deter violent attacks from street gangs.

Former Chavista army general Henri Falcón was expelled from Venezuela opposition coalition after announcing his candidacy for the April 22 election. According to the opposition, Falcon’s bid legitimizes what they consider a fraudulent and rigged election.

The Colombian Supreme Court has announced it plans to declare three crimes in which former president and current senator Álvaro Uribe is allegedly involved were crimes against humanity. This decision would prevent the massacres of La Granja and El Aro, 1996 and 1997 respectively, and the 1997 murder of human rights defender Jesús María Valle —who publicly denounced the massacres perpetrated by right-wing paramilitaries— from reaching the statute of limitations. The court has opened 28 legal processes against Uribe, who claims there is a political persecution against him.

Peruvian president Pedro Pablo Kuczynski was accused of receiving funds from Brazilian construction company Odebrecht for his 2011 presidential campaign by a former official of that company, said the attorney of opposition leader Keiko Fujimori yesterday. The official also claimed that two members of the Fujimori party likewise received money from Odebrecht in the 2011 campaigns. Both Kuczynski and Keiko, daughter of recently liberated ex-president Alberto Fujimori, deny the claims. Kuczynski is the third Peruvian president to be ensnared in the Odebrecht scandal.

In a devastating blow to environmental activists, Brazil’s supreme court upheld new laws which reduce penalties for past illegal deforestation in the Brazilian Amazon. Environmentalists worry that the revised laws, known as the “forest code”, will normalize deforestation in Brazil. The majority of the Amazon Rainforest, which plays a critical role in consuming carbon emissions and countering global climate change, lies in Brazil.