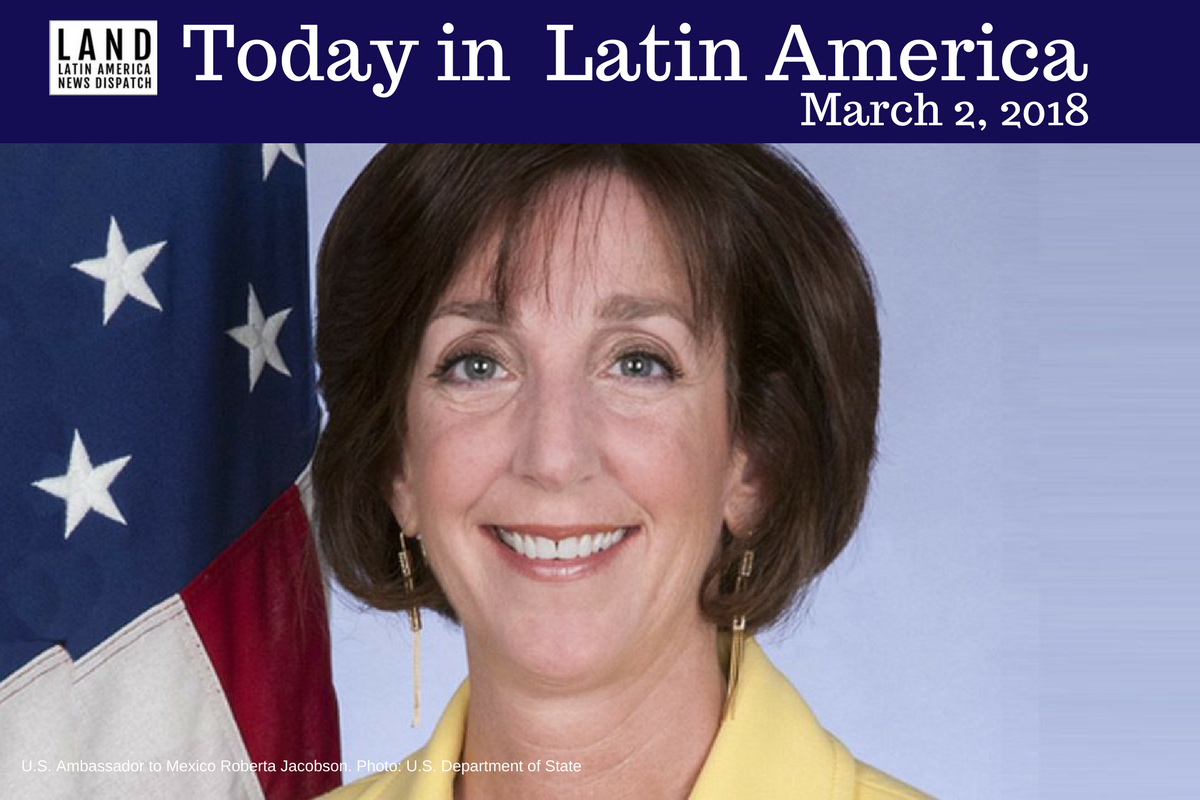 The United States ambassador to Mexico announced on Thursday that she plans to resign in May, dealing another blow to the increasingly tense relations between the two countries. Roberta Jacobson, who served the post just under two years, has more than three decades of experience in the region and is one of the few experts on Latin America among active U.S. diplomats. Her departure comes days after Mexican President Enrique Peña Nieto canceled a visit to the White House and as President Donald Trump continues calling on Mexico to pay for a border wall and threatening to walk away from the North American Free Trade Agreement.

A pre-candidate for mayor in the Mexican state of Puebla was killed Thursday while driving his car, marking the second time in four days a local pre-candidate has been murdered in Mexico. Aarón Varela, contender for mayor of Santa Clara Ocoyucan, was a member of the “Juntos Haremos Historia” political coalition. This week’s killings come amid rising deaths and violence connected to this year’s elections.

A delegation of the Haitian government, including President Jovenel Moïse, canceled its participation in a United Nations cholera retreat in New York this week—just a day after the country recalled its ambassador to the U.N. The latest clash between Haiti and the organization started when a senior U.N. official praised a corruption probe into the alleged misuse of $2 billion by previous Haitian administrations. Haitians, meanwhile, continue to suffer the aftermath of a cholera outbreak that was caused by U.N. peacekeepers following the deadly earthquake in 2010.

Puerto Rico was plunged into darkness for hours on Thursday after the island’s main power plants, Palo Seco and San Juan, shut down because of a failure of unknown origin in a main power line. The blackout left almost a million people without power and affected at least four municipalities. Puerto Rico’s power grid was mostly destroyed during Hurricane Maria and more than 15 percent of residents are still without power five months later.

Former Guatemalan President Álvaro Colom will remain in custody and a criminal probe against him will continue, a judge decided on Thursday. The judge said Colom and 12 of his former Cabinet member should be investigated for possible fraud and embezzlement in connection with a multi-million dollar public transit deal.

Venezuelan presidential elections have been postponed to May 20. The vote, which is traditionally held in December, had been brought forward by the government to April 22. The new decision was part of a deal reached with some opposition parties but not with the main opposition coalition, the Democratic Unity, which said it would maintain its boycott.

Brazilian mining company Samarco failed to take actions to prevent a major 2015 dam collapse, according to previously unreported documents by federal prosecutors. The burst of the Fundão tailings dam, in Minas Gerais state, killed 19 people and created a massive environmental disaster. Prosecutors now say the company had done a risk assessment that had predicted the disaster as a worst-case scenario but decided to cut costs and increase production.

The clerical sex abuse scandal in Chile continues to grow even as Archbishop Charles Scicluna concluded his investigative trip to the country on Thursday. The archbishop, sent to investigate accusations that Bishop Juan Barros had chosen to ignore abuses of which he had been a witness, returned to the Vatican with new claims of other abuses that were equally mishandled in the religious orders of the Marist Brothers, the Salesians and the Franciscans.