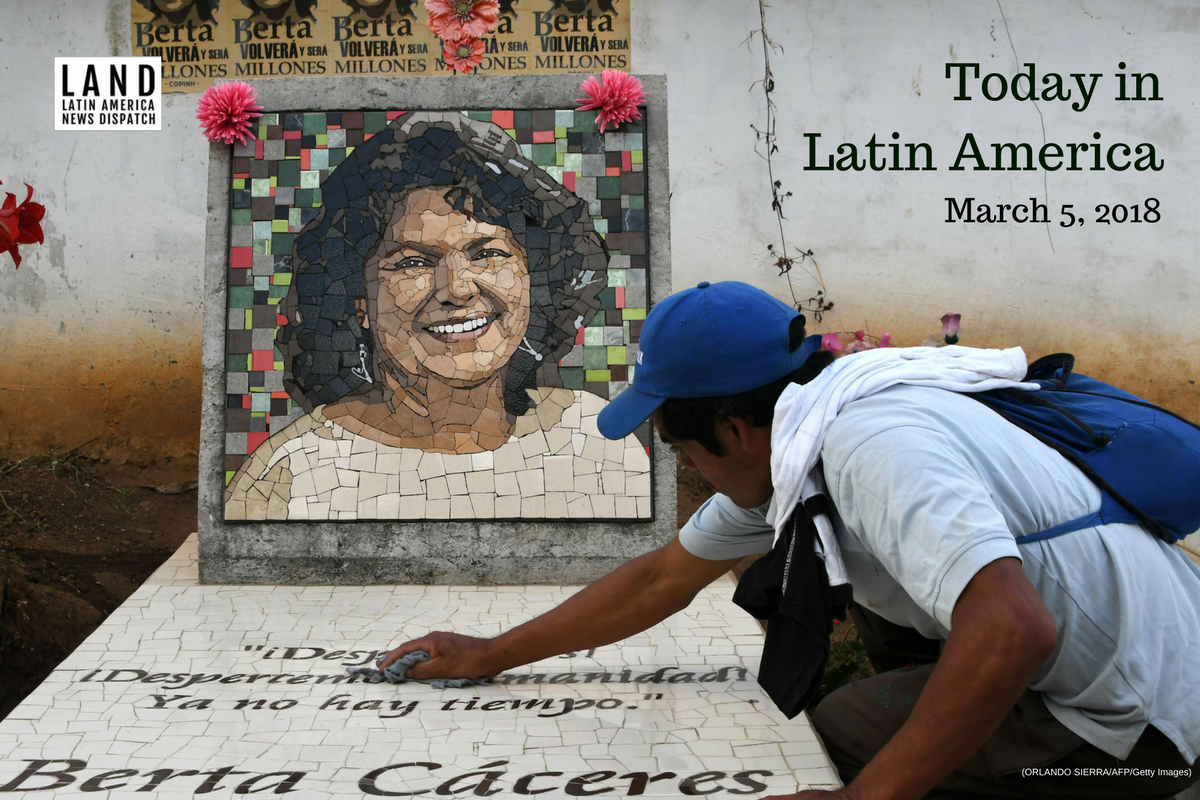 Honduran authorities arrested David Castillo Mejía Friday on charges that he orchestrated the 2016 assassination of celebrated environmental and indigenous rights activist Berta Cáceres. A former military intelligence officer, Mejía was the executive president of Desarrollos Energéticos SA (Desa), the hydroelectric company contracted to build a dam on the Gualcarque river, which is sacred to the indigenous Lenca people. Taken into custody while preparing to board a flight to Houston, Mejía was the ninth person arrested in connection with the Goldman environmental prize-winner’s murder but the first “intellectual author,” according to the Honduran Public Ministry. Of those arrested, four have ties to the Honduran military.

The Guardian has reported that Cáceres’ name appeared on a hit list shared among U.S.-trained Honduran special forces. Prior to her killing, which took place exactly two years ago Friday, Cáceres told friends and family that Mejía had been intimidating her over the phone and in person. Cáceres’ murder sparked worldwide outrage and placed pressure on the Honduran government, which has been mired in high-level corruption scandals since a 2009 military coup, to hold her killers responsible. In a statement released Friday, Desa, whose board includes some of Honduras’ most powerful families and interests, released a statement denying Mejía’s involvement and blaming his arrest on “international pressures and smear campaigns.”

The the ACLU launched a six-figure advocacy campaign Sunday to pressure U.S. President Donald Trump to protect undocumented immigrant youth. A collaborative effort with Moveon.org, and United We Dream, the campaign was timed to coincide with the original March 5 deadline set by President Trump for the expiration of DACA, which extended temporary legal status to undocumented immigrants brought to the country as children. Last week, the Supreme Court elected to leave in place an injunction allowing DACA protections to continue.

Guillermo del Toro took home the Academy Award for best director Sunday night, the fourth time a Mexican has done so in the past five years. Del Toro’s The Shape of Water also won best picture, along with three other Oscars, following Alejandro González Iñárritu’s Birdman in 2015. Accepting the best animated picture award for Coco, Pixar’s bilingual ode to the Day of the Dead, director Lee Unkrich thanked the people of Mexico and insisted that “representation matters.”

Fighting back against corruption allegations, center-right presidential candidate Ricardo Anaya called Sunday on Mexican President Enrique Peña Nieto to “take his hands off the electoral process.” Anaya, a former congressman and leader of the opposition PAN party who is currently polling in second place ahead of July’s contest, is being investigated for profiting from an illicit land deal in his home state of Querétaro, allegations that he says are part of a political attack on his campaign.

The U.S. Army Corps of Engineers (USACE) will receive $200 million in supplies over the next two weeks, as part of a federal push to restore power to Puerto Rico. Before leaving the hurricane-battered U.S. territory in mid-April, the USACE intends to have brought electricity coverage back to 90-95%, though the commander in charge of the relief effort acknowledged that rural communities in the island’s mountainous interior may remain without electricity through May.

In a festive ceremony yesterday, the Spanish city of Barcelona removed a statue of infamous slave trader to the Americas Antonio López y López. As Marquis of Comillas, López y López amassed a great fortune shipping kidnapped Africans to Cuba, where he resided for most of his life. Local authorities called the statue’s removal “an act of reparation to all who have felt offended in the city.”

Venezuelan presidential elections have been postponed to May 20. The vote, which is traditionally held in December, had been brought forward by the government to April 22. The new decision was part of a deal reached with some opposition parties but not with the main opposition coalition, the Democratic Unity, which said it would maintain its boycott.

Chilean President-Elect Sebastian Piñera will present a pension reform proposal to Congress before the summer, according to incoming Labor Minister Nicolás Mockenberg. In an interview published Saturday in La Tercera, Mockenberg said that an aging population presents Piñera, a conservative billionaire and former president who retakes office March 11, with an “obligation and a moral duty” to raise payments to the poorest sectors and “foment competition” between private providers.

President Mauricio Macri’s administration stood behind Argentine spy chief Gustavo Arribas Friday, in the face of accusations by Brazilian investigators that he laundered some $850,000. Arribas, a former soccer agent appointed by Macri in 2015, Arribas has denied receiving the money, which Brazilian authorities tracked through Hong Kong as part of the sprawling “Car Wash” investigation into bribery and massive corruption.