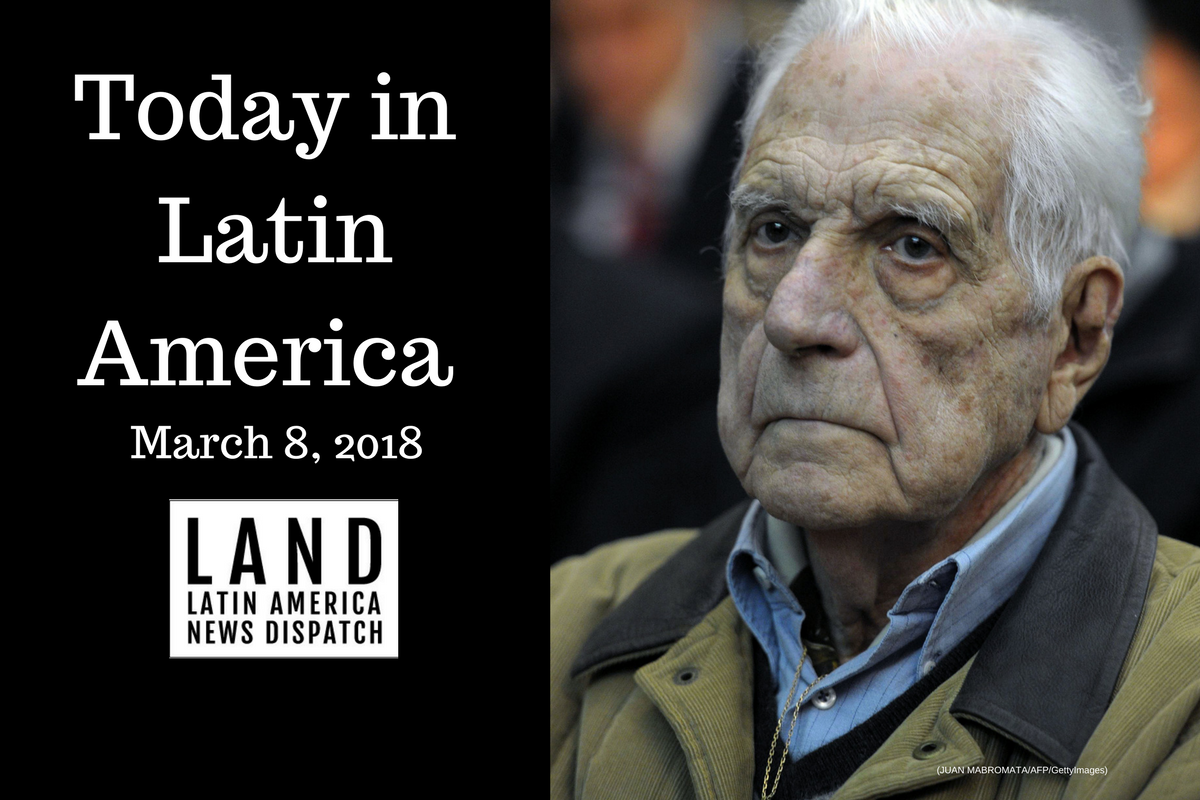 Eight years after he was sentenced to life in prison for crimes against humanity, Argentina’s last military dictator, Reynaldo Bignone, died after a heart attack in a military hospital yesterday. He was 90.

Also known as “the baby theft general,” Bignone was the last head of state of Argentina’s brutal 7-year dictatorship that ended in 1983. He was credited with overseeing the kidnapping and killing of left-wing opponents and the theft of their babies, who were then given to supporters of the regime.

The dictatorship stemmed from the “Dirty War,” a campaign to eradicate communist radicals and other dissidents in the Southern Cone. About 30,000 people disappeared or were killed during that war.

For the first time ever, Texas is poised to send two Latinas to the U.S. House of Representatives. Sylvia Garcia and Veronica Escobar won the primaries in majority Democratic and Latino districts, which effectively paves the way for both of them to win their respective elections in November, which would be a first in the state’s history.

Mexico offered Jamaica support in stemming the cross-border shipment of guns and ammunition, announced Mexico’s Foreign Secretary Luis Videgaray  during a visit to the Caribbean country in the wake of growing security crises in both countries.

Trinidadian Prime Minister Dr Keith Rowley met with local Muslim leaders yesterday to discuss a new anti-terrorism bill the religious leaders deemed discriminatory. The tiny island has one of the highest recruitment rates for Isis in the Western world.

Guatemala’s president Jimmy Morales said yesterday the military will be withdrawn from day-to-day law enforcement duties after accusations of corruption and criminal activity. Critics have  said the army’s presence in policing violates the 1996 peace accords that ended 36 years of civil war.

The trial of Bolivian ex-president Gonzalo Sánchez de Lozada for human rights abuses began yesterday in a court in Florida. The defendant’s lawyer said that he is not responsible for the October Massacre—when in 2003 government forces killed 50 civilians during widespread protests—and blamed the deaths on the leaders of the protests, now Bolivian President Evo Morales and indigenous peasant activist Felipe Quispe. This is the first time a former head of state is being tried for human rights violations in a US court.

The leader of Colombia’s once-largest rebel group, Rodrigo ‘Timochenko’ Londoño, underwent a successful heart surgery yesterday —his second in a week— but it’s unclear whether he’ll remain a presidential candidate. Londoño, head of the FARC, a former guerrilla group that turned into a political party after a 2016 peace agreement, would be the group’s first presidential candidate. But with just days left to register for the May elections, the party is reconsidering the decision because of his poor health.

Brazil’s highest court ruled this week that former President Luiz Inácio Lula da Silva can go to jail while he awaits his final appeal against a criminal conviction on corruption charges. The Superior Court of Justice rejected da Silva’s request for an injunction, leading him to accuse prosecutors of trying to make him a political prisoner. Meanwhile, Da Silva, who was president from 2003 to 2011, remains the frontrunner for the October presidential elections.