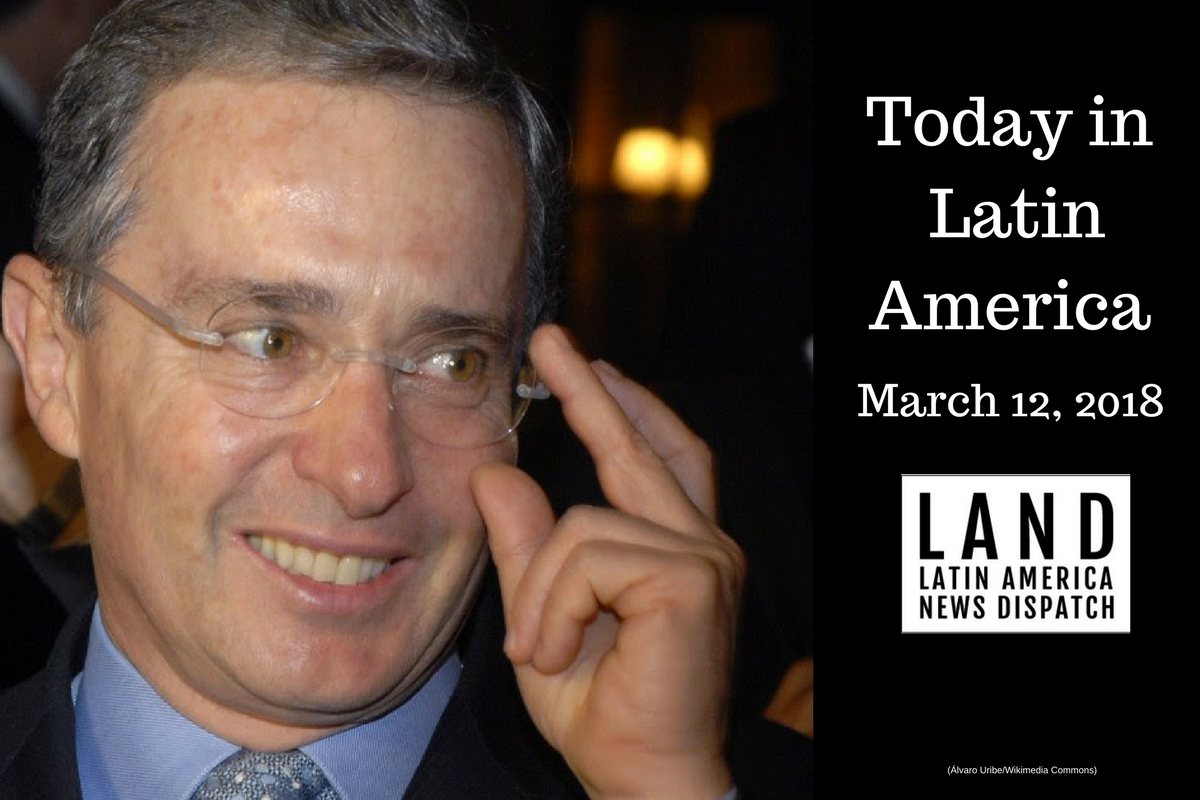 Right-wing movements opposed to Colombia’s peace deal with the Revolutionary Armed Forces of Colombia (FARC) rebels were the big winners of yesterday’s legislative elections. Having headed an upset “No” campaign against the 2016 FARC peace referendum, Senator Álvaro Uribe was the leading vote-getter among all legislative candidates. The former president’s Democratic Center became the largest individual party in both houses. And despite an outcry from the right over a shortage of primary ballots, Senator Iván Duque, Uribe’s hand-picked candidate for president, won nomination with over 4 million votes, more than either of the top finishers in 2014’s first-round presidential election. Duque is well-positioned for a possible June runoff and could win outright on May 27, if he manages to consolidate voters in Sunday’s right-wing primary and bleed support from the center-right former Vice-President Germán Vargas Lleras.

Duque’s presumptive counterpart in a second round, former Bogotá mayor Gustavo Petro, also had an impressive showing, handily winning a two-way primary with over 2.8 million votes, more than any openly leftist candidate in recent history. A demobilized M-19 urban guerrilla, Petro has led opinion polls for weeks and is expected to absorb the 500,000 votes that went to his competitor, who endorsed him after conceding Sunday. Though its presidential candidate, former Governor of Antioquia Sergio Fajardo, did not participate in Sunday’s primary, an independent center-left coalition gained seats in both houses. Meanwhile, the FARC’s new political party, which goes by the same acronym, did not get enough votes to add to the 10 seats, five in each house, set aside by the peace deal.

Mexican authorities announced yesterday that they’ve ruled out terrorism and organized crime as possible motives for a ferry explosion that injured 26 people in the resort city of Playa del Carmen last month. The attorney general’s office did not say whether there are currently any suspects in the Feb. 21 blast, which it claims was caused by a homemade or rudimentary device. Playa del Carmen’s U.S. consular office is expected to resume operations today, after being closed due to an unspecified and supposedly unrelated “security threat.”

The Trump Organization plans to sue the Panama City luxury hotel from which it was recently evicted, after the majority owner changed the establishment’s name from the Trump Ocean Club International Hotel and Tower to the “Bahia Grand Panama” Friday. Lawyers for the Trump Organization, which is owned by President Donald Trump and run by his children, said they want the president’s name restored and may seek compensation for damages caused to the Trump brand.

More than 6 million Cubans voted to ratify a government-approved list of representatives to the 605-member National Assembly yesterday, according to election officials. The Assembly convenes April 19 and will be tasked with elevating a new president. Vice-President Miguel Díaz-Canel, who stood in line to vote Sunday, is expected to become the first leader outside the Castro family to hold the office in almost six decades.

Home to the world’s second-largest barrier reef, Belize announced Friday that it will more than triple its protected no-take fishing zones by the end of 2018, from 3 to 10 percent of its total ocean territories. The announcement came at the end of the World Ocean Summit in Mexico, during which Brazil and other Latin American countries also made similar commitments.

In a mass demonstration Saturday, Bolivians stretched a blue, 120-mile-long “flag of maritime revindication” across the length of the landlocked country, to demand an outlet to the sea. Bolivia’s legal team is scheduled to deliver oral arguments before the International Court of Justice on March 19, in support of its claim to a stretch of Pacific coastline captured by Chile in a late 19th century war.

A trust for Venezuela’s state petroleum company is suing a group of prominent foreign oil traders in U.S. court for allegedly bribing company officials. The 60-page lawsuit, which was unsealed by a federal judge in Miami on Thursday, describes an elaborate scheme to distribute insider information and acquire rigged contracts from Petróleos de Venezuela SA. A lawyer for the oil trust told reporters that Glencore Ltd., Vitol SA, and other alleged conspirators cheated the Venezuelan government out of $5.2 billion in revenue over the past decade.

Conservative billionaire Sebastian Piñera was sworn in as Chilean president yesterday, in the third straight inauguration ceremony in which he and Michelle Bachelet have traded office. Piñera, who led the country from 2010 to 2014, campaigned on a pro-business platform, promising to revamp economic growth. With Bachelet ’s departure, South America’s presidents are once again all men, after a period of relatively prominent women leadership.