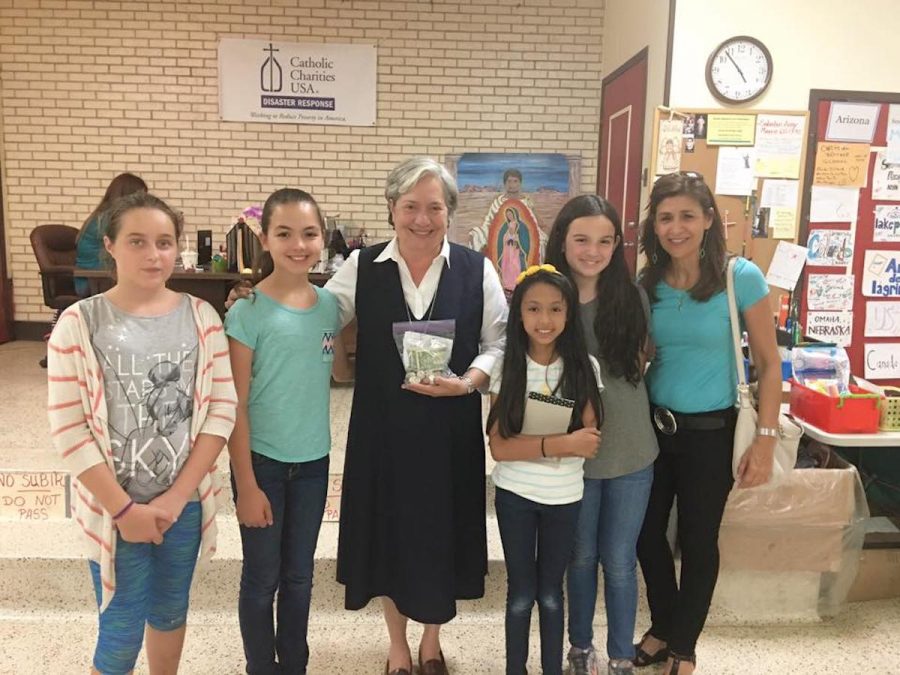 A local group of girls from a parish collected donations for the Humanitarian Respite Center and presented it to Sister Norma Pimentel. (Courtesy of Catholic Charities)

McAllen, Texas — Every day in this border town, hundreds of migrants arrive by bus. Many have left the only home and family they have ever known, in search of opportunity in the United States. While these men, women and children arrive from across the globe, most have fled violence in their native Central American countries. Some lose fellow travelers along the way. Many of them are minors who are traveling alone.

Some have endured near starvation, intense thirst, robbery, kidnapping and even rape during their journeys. All have been caught trying to enter the United States by Customs and Border Protection (CBP) agents. They are detained but then released with plans to attend court at a later date. It is a process commonly known as “catch and release” that President Donald Trump has criticized as ineffective.

“No another country in the world has the stupidity of laws that we do when it comes to immigration,” Trump said in February. “And if we don’t get them changed, this isn’t politics, this isn’t Republican and Democrat, this is common sense. So, it has to be taken care of.”

Since 2014, volunteers from the Sacred Heart refuge, which is operated by Catholic Charities of the Rio Grande Valley, have met the immigrants upon their arrival and afforded them overnight lodging, food, clothing and transportation assistance as well as immigration case follow-up as needed. A permanent facility for these operations, the Humanitarian Respite Center, opened in 2016.

While these volunteers agree with President that the issue can’t be narrowed down to politics, they disagree on the reasoning behind the stance. They see their actions as ways to help solve what they view as a humanitarian crisis.

“As Catholics, we believe strongly that when we encounter suffering immigrants, we are witnessing the suffering of Christ. We see this is an ethical and moral obligation,” Sister Norma Pimentel, executive director of Catholic Charities of the Rio Grande Valley, told Latino USA.

However, she said, immigrants do not have to be Catholic or Christian to receive help.

While the rest of the country debates the legal and financial ramifications of aiding non-Americans, Pimentel said McAllen, including its taxpayers and politicians, have embraced the cause.

“All the politicians we’ve come across, including city government, want to help us with anything they can,” Pimentel said.

She noted that the local CBP chief and U.S. Immigration and Customs Enforcement (ICE) officers regularly offer help as needed.

McAllen, a community on the front lines of the border crisis, has responded to the humanitarian crisis long before there were talks of immigration reform and a border wall with Trump’s intensity.

In 2014, MSNBC reported that the respite, which at the time was operated out of parish halls at Sacred Hall Church blocks away from the central bus station, served as a cushion for the government while it figured out how to tackle immigration. At the time, there were huge waves of unaccompanied children coming in from Central America.

When President Barack Obama declared the situation a humanitarian crisis and approved emergency money and resources to the border, local detention centers had already run out of beds for these children.

The Rio Grande Valley alone saw a 178 percent increase in the number of children migrating into Texas. Catholic Charities and local partners stepped up to fill the gap, and never stopped.

Pimentel said the number of migrant children has decreased since the Trump administration took over but the need for additional, non-governmental services is still needed.

An ICE spokesperson told the Daily Mail that since the Flores Settlement Agreement of 1997, which oversees detention standards, the agency has been “severely limited” in how it can detain families and only does so in “designated facilities.”

He went on to say that deportation officers release migrants based on their criminal records, immigration histories, ties to the community and risk of and their potential threat to public safety. Thus, those who receive aid from Catholic Charities, are unlikely to pose a threat.

“I believe strongly that many of the people who may be against the whole idea of helping an immigrant have more than likely been distanced by laws and ideas that immigrants are bad people,” Pimentel said.

Immigrants who pose security threats are the ones most likely to be put in custody at local detention centers. When the centers reach capacity, some individuals are released or not allowed in, which is when they seek refuge at the shelter. To many immigrants, the center serves as their first point of contact where they receive a bowl of chicken soup —their first warm meal in days— and are connected to family members across the United States willing to purchase them bus tickets to their final destinations.

Pimentel said the experiences immigrants share with volunteers are usually harrowing and heartbreaking in nature. There is Evan Reyes, who paid coyotes about $2,000 to help he and his seven-year-old son Christopher travel from Honduras to the United States.

Carlos Dominguez arrived around the same time from Honduras. The Daily Mail reported that he cried in relief as he enjoyed a bowl of chicken soup. He was held for ransom and finally arrived in the United States after two months. The cost of his release was forcefully selling his home. He arrived with his 14-year-old son Willy ready to search for work in Maryland.

There are many stories ingrained in Eleazar Fernandez’s memories after working as program coordinator at the shelter for three years. The first one that comes to mind is of a young boy who arrived from Central America with his mother.

“They had fled violence in their country and he had been shot through the elbow and still had bandages on,” Fernandez told Latino USA.

Another man was awaiting his release from detention when he was notified his son had been killed.

Pimentel recalls the experience of one father-and-son duo who befriended two teenage girls while making their trek north. Along the way, they were kidnapped by thugs and placed in stash houses, where they were separated from the girls. The father said he could hear the girls crying and screaming from another area of the house, but he never saw them again.

These stories are common since 99 percent of migrants who arrive at the respite center are coming from El Salvador, Honduras and Guatemala. Pimentel said there is a small percentage of people journeying from South America, Africa, Romania, China and Mexico.

The ethics and legality of Catholic Charities’ immigrant-friendly efforts recently caused waves on various social media platforms, as people on opposite ends of the political spectrum pondered how separation of church and state plays a factor in the narrative.

The organization’s efforts are only possible through donations from the community and elsewhere. Pimentel insists the operation is a collaborative effort among all local stakeholders. The fact that the center can run fully on donations and volunteers is evidence of community support, she said.

“If there is anyone who doesn’t like what we’re doing, they’re not vocal about it and are not doing anything to stop it,” Pimentel said.