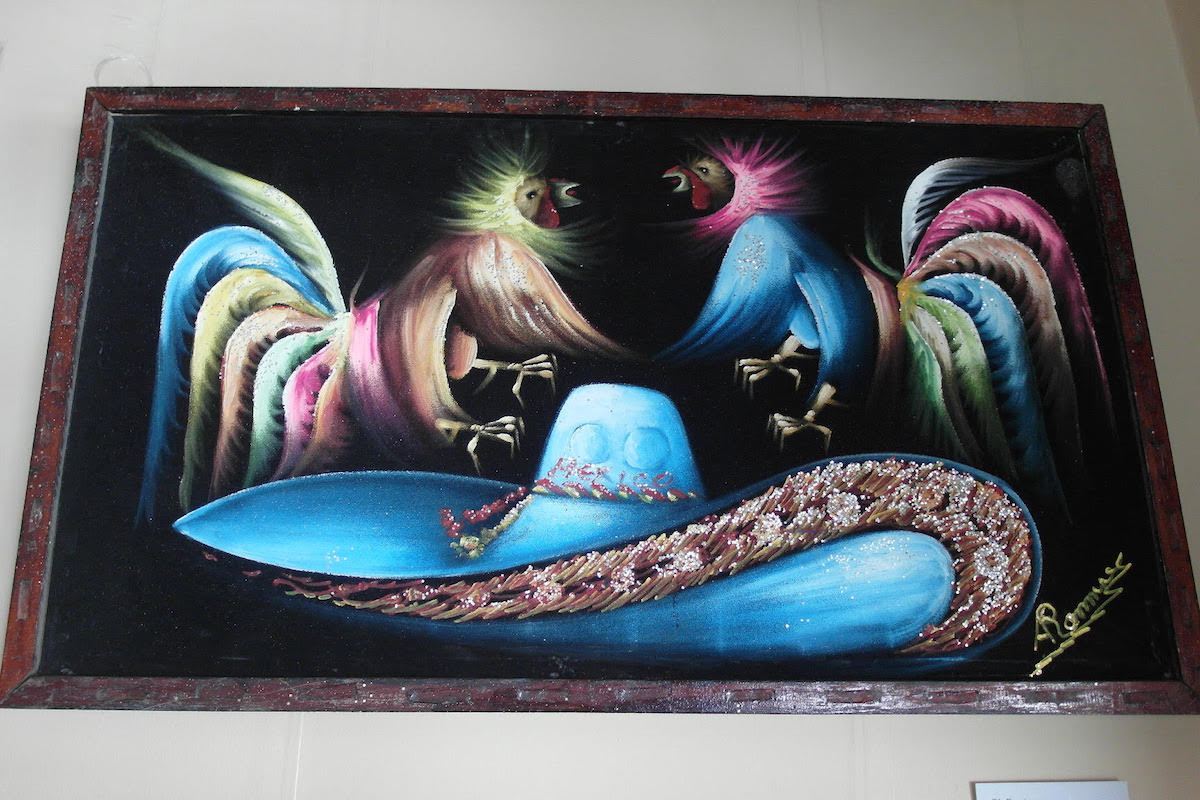 The imagery of cockfighting was common in the many souvenir shops in 1960s and 70s Tijuana. (Photo by Serena Maria Daniels/Latino USA)

DETROIT — Chicano art historian Tomás Ybarra Frausto describes the Spanish slang term rasquache as the concept of “making do” with very little. It loosely translates to tacky or shoddy. Some might even call it ghetto or kitschy.

In describing the art of velvet paintings, rasquache or rasquachismo is fitting. For generations, these pieces have been placed on the mantles of Chicano households from L.A. to Texas, Oklahoma to Michigan, and yet, have never really gotten the recognition they deserve as a legitimate art form.

“This is the people’s art and we’re glad to be able to share it in a space that is welcoming,” Herrada said to the packed gallery.

The women reached far and wide across the country to curate a collection of 86 donated and loaned artworks. The resulting compilation provided visitors with a glimpse into themes popularized in Chicano culture: vintage Elvis, Marilyn Monroe, cartoon-like burros, matadores, the ubiquitous La Virgen de Guadalupe and the Legend of Popocatépetl.

The traveling exhibit will move to Detroit this week, with an opening noon reception on Saturday, March 17 at the MexicantownCDC Latino Cultural Center. Future stops in Michigan include Saginaw, Grand Rapids and Adrian.

At each stop, local artists are taking part by submitting their own interpretations of the art form.

Among those being featured at the Detroit stop will be noted Michigan artist Nora Chapa Mendoza, who has exhibitions both nationally and internationally and was in 1999 recognized as a “Michigan Artist of the Year.” Her work can also be found at the Lawrence Street Gallery in the Detroit suburb of Ferndale.

“It’s about time we see this,” Mendoza told Latino USA at the Lansing opening. “Although it was not always a valued art form, I think it was a way for artists to express themselves at the time.”

The first velvet paintings were part of the mid-century Tiki craze, the creation of Edgar Leetag, an American billboard painter, who had lived for a time in Tahiti, and whose works could be found in many a Hawaiian bar and restaurant, according to journalist Sam Quinones in a 2002 LA Times Magazine article. The art form was popularized though in border towns like Tijuana and Juárez, where in the 1960s and 70s, curio shops were inundated with velvet painting vendors selling all manner of works running the gamut of American pop culture icons from Looney Tunes to Pink Panther, ripe for the taking by tourists.

Though widely viewed as low-brow kitsch, the Tijuana velvet industry was serious business. By the 1970s, the painters unionized and became part of the PRI, Mexico’s longest-ruling political party, in exchange for protection from police harassment.

Quinones noted in his article that the velvet fad died down by the 1980s with the rise of industrialization along the U.S.-Mexico border.

That doesn’t mean the fad was abandoned. During the Lansing opening, guests swapped stories about “velvis,” as they’re sometimes affectionately referred, hanging inside their homes as children.

Herrada says she and the other curators assumed much of the donated artwork would come from the American Southwest, but found an abundance of pieces from all corners of the country, many straight from the walls of collectors.

The organizers did their best to include details about the origins of each painting, but many are unsigned, as is typical of the mass-production nature of the works. Among the collection is an authentic authorized copy of a Leeteg original, “Tahitian Chief.”

Many came from Michigan collectors.

Chicanos have a long history in Michigan, with waves of Mexican-Americans making their way to the Motor City starting around the turn of the 20th century drawn to the automotive industry and migrant farm workers settling in other parts of the Mitten State to work the sugar beet fields starting in the 1940s.

There are some 349,000 Michiganders who identify as Mexican or Mexican-American, according to U.S. Census estimates, but the community can feel far removed from other cultural hubs closer to the U.S.-Mexican border.

The paintings, Herrada noted, are symbolically significant to keeping the community connected to their roots.

“We’re a long way from where our parents and grandparents are from,” she said. “These paintings are a reminder of where we come from.”