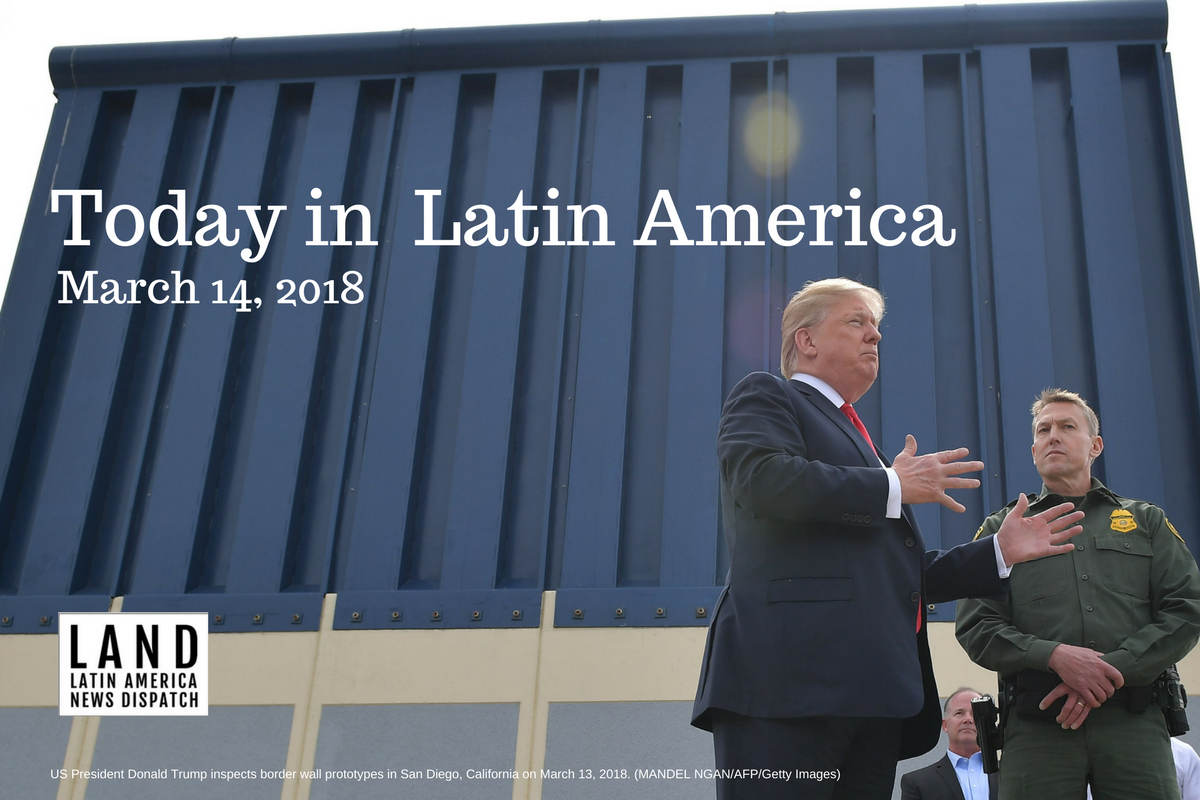 The 30-foot mockups —four built with concrete and four made with other materials, like steel— cost about $20 million. Funding for the actual project, which is estimated to cost between $25 billion and $100 billion, has yet to be approved. Despite Trump’s campaign promise that Mexico would pay for the 1,900-mile wall, the Mexican government has repeatedly dismissed the idea and tensions between the two countries have only escalated in recent weeks.

Protests were held in San Diego, where the prototypes are displayed, and in Tijuana, the closest city on the Mexican side. Several residents in Tijuana told Reuters yesterday that the project is a waste of money and unlikely to curb border crossings.

Mexican presidential candidate José Antonio Meade has been the latest to urge his opponent and front-runner, Andrés Manuel López Obrador, to participate in an unofficial televised debate prior to the three official debates organized by an electoral institute. López Obrador, who has a double-digit lead in the polls, has refused to participate in unofficial debates, stating that they could be biased. Instead, the left-wing candidate has suggested that his two main opponents, Meade and Ricardo Anaya, debate among themselves and settle their accusations of money laundering and embezzlement.

Snakes, iguanas, lizards and other animals have been found inside bottles of mezcal, a traditional spirit that usually contains a worm, in the Mexican state of Oaxaca, prompting environmental regulators to set up a surveillance operation in the area yesterday. The case comes months after authorities seized almost 10,000 gallons of tainted alcohol from a company that supplied tourist areas like Cancun and Playa del Carmen.

Dominican authorities dispatched additional police and military soldiers yesterday to the border town of Pedernales, after the death of a Dominican couple due to a machete attack in February galvanized existing animosity between Haitians and Dominicans. In the preceding days, a group of local Dominicans gave a 24-hour ultimatum to Haitian citizens living in the town to leave.

The Kick ’em Jenny submarine volcano, located almost 5 miles north of the Caribbean island of Grenada, may be about to erupt, though with no imminent threat to the region, save for shipping boats. Seismic authorities elevated the alert level yesterday from yellow to orange and indicated that the eruption could occur under 24-hours’ notice time.

A Salvadoran woman jailed for stillbirth 14 years ago was set free yesterday after the country’s Supreme Court commuted her 30-year sentence, the longest-serving under El Salvador’s total ban on abortion. The release of Mayra Verónica Figueroa Marroquín occurs at a pivotal time, since two bills introduced into Congress aim to reform the country’s abortion laws.

Panama’s second biggest city, Colón, was paralyzed yesterday at the end of a civic demonstration over infrastructure and insecurity. The protest ended in a confrontation with authorities when a breakaway group of protesters attacked the police and looted businesses, causing riot officers to respond with tear gas. Colón houses the most important free trade zone after Hong Kong.

A former security chief and current leader of a leftist movement hoping to challenge Venezuelan President Nicolás Maduro was arrested yesterday during an event at a hotel in Caracas. Authorities said Miguel Rodríguez Torres, who served under the late President Hugo Chávez, planned armed actions and was conspiring against the constitution. Rodríguez is one of several critics of Maduro who have been barred from running in the upcoming elections.

Peru’s Supreme Court of Justice agreed yesterday to request the extradition of former president Alejandro Toledo from the United States. Two warrants for Toledo’s arrest were issued in 2017 after he was accused of accepting bribes from Odebrecht, a giant Brazilian company involved in a continent-wide corruption case.

As Chile and Bolivia prepare to bring their century-old maritime dispute to the International Court of Justice in the Netherlands next week, Chilean Chancellor Roberto Ampuero assured yesterday that “not even one square centimeter of Chilean sovereignty” is up for bargain in the upcoming negotiations. The statement came after a Chilean senator discussed in a CNN interview the possibility of exchanging maritime sovereignty for territorial sovereignty with Bolivia. The dispute dates back to 1879, when land seizures in the War of the Pacific cut Bolivian territory off from the sea.