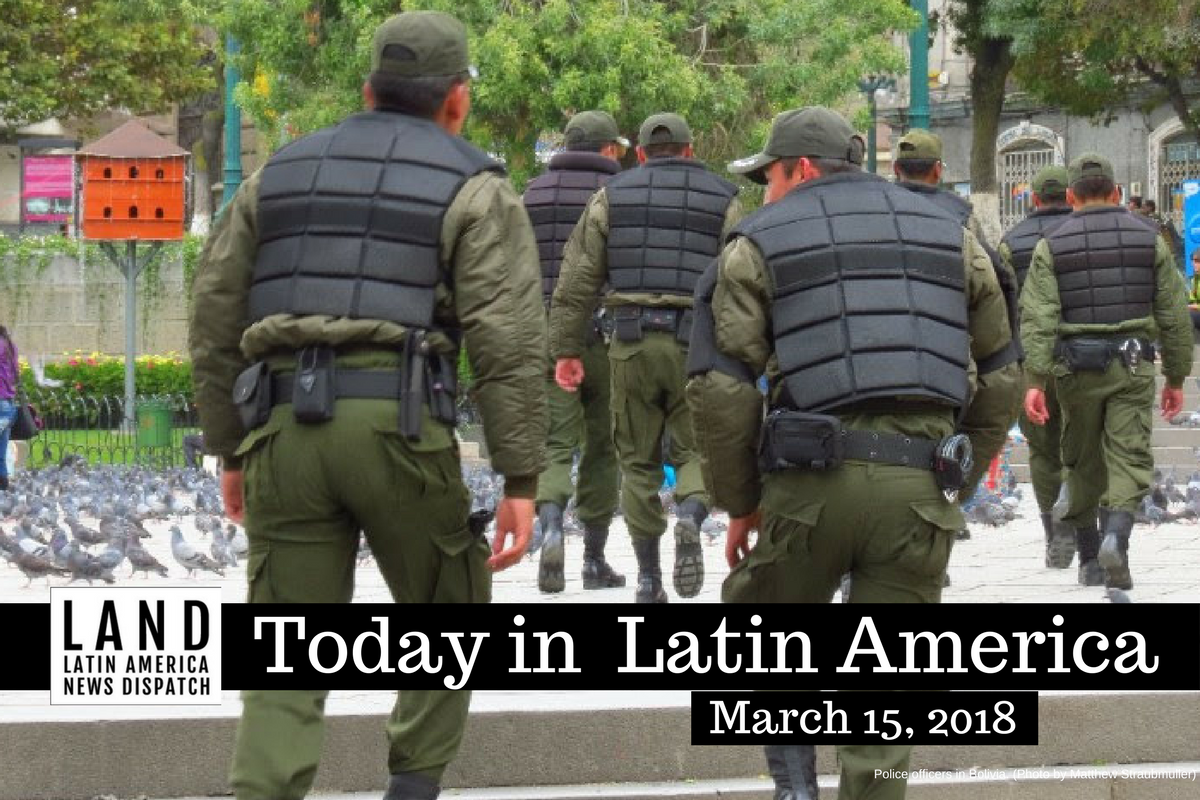 Before dawn yesterday, 2,300 police officers supported by helicopters raided the largest prison in Bolivia, resulting in 7 dead inmates and 25 injured, including seven officers. An uprising in the Palmasola prison in Santa Cruz, where 5,000 men and women are incarcerated, started 10 days ago when authorities ruled children over six years old living with relatives inside the prison would have to be moved to foster homes after an eight-year-old girl was repeatedly raped by an inmate. There were initial reports that six inmates had fled during the first day of the riots, and although four were either recaptured that same day or never left the prison, two convicted murderers were on the run.

After seizing 85 knives and machetes, three guns, one shotgun, four grenades, cell phones alcohol and drugs, the authorities deemed the operation “a success” and announced similar police actions would be conducted in all other prisons in the country.  But inmates’ relatives protested outside the prison with signs and sticks denouncing police brutality, and were suppressed by police officers on horseback.

A Mexican human rights group announced yesterday that a Roman Catholic priest accused of sexually abusing a boy has been sentenced to 63 years in prison. The conviction and sentence are both firsts for a priest in Mexico City.

U.N. investigators and activists have accused Mexico’s government of crimes against humanity for alleged inhumane practices in the handling of the war against narco-trafficking. The accusations were delivered on Tuesday at the U.N. Human Rights Council in Geneva, Switzerland, with Mexican actor Gael García Bernal as a spokesperson for the Mexican Commission for the Defense and Promotion of Human Rights. The Mexican government’s delegation had been on the list of speakers but withdrew.

Asian and European ships’ illegal fishing in the Caribbean Sea is putting the region under additional strain and causing a crisis of overexploitation, according to environmental organizations who denounced the absence of effective cooperation among countries to manage shared resources. The U.N. Food and Agriculture Organization reports between 20 to 30 percent of fishing in the Caribbean is illegal.

Hundreds of laid off mine workers from a controversial silver mine owned by Canada’s Tahoe Resources marched yesterday in Guatemala demanding a top court order the mine reopen. Located in San Rafael las Flores, southeast of Guatemala City, the mine suspended its activity nine months ago, after an environmental NGO argued the Xinca indigenous people had not been consulted about the project. Mine workers were laid off in January.

Mossack Fonseca is shutting down at the end of the month, the law firm exposed in the Panama Papers investigation announced yesterday, alleging irreversible damage to their reputation and adding they would continue to fight “for justice.” The firm’s millions of leaked documents in early 2016 revealed the inner workings of global tax evasion and offshore companies, sparking indignation around the world.

In Quito, Ecuador a group of Indigenous women protested a law approved on Tuesday to develop the Amazon region.The law would have 4 percent of the price of every barrel of oil extracted from the region reinvested in a local development fund and provide reparations for those affected by environmental disasters. The group was calling for an end to oil extraction and mining in the region altogether, arguing the law had not fulfilled the international requirement of free, prior and informed consultation with indigenous peoples.

Brazilian president Michel Temer said yesterday he will bring the matter of the new U.S. tariffs on steel to the World Trade Organization if a “friendly” solution is not achieved. Brazil is the second largest source of steel imports into the United States after Canada—which along with Mexico was temporarily excluded from the tariff. Roberto Azevedo, head of the WTO, said the multilateral body is preventing a trade war.

Another close ally of Temer has been indicted on charges of corruption and money-laundering. Senator Romero Juca, Temer’s former minister of planning, is accused of seeking illegal campaign funding from construction company Odebrecht in return for political favors. His lawyer said “There is no proof against him.”