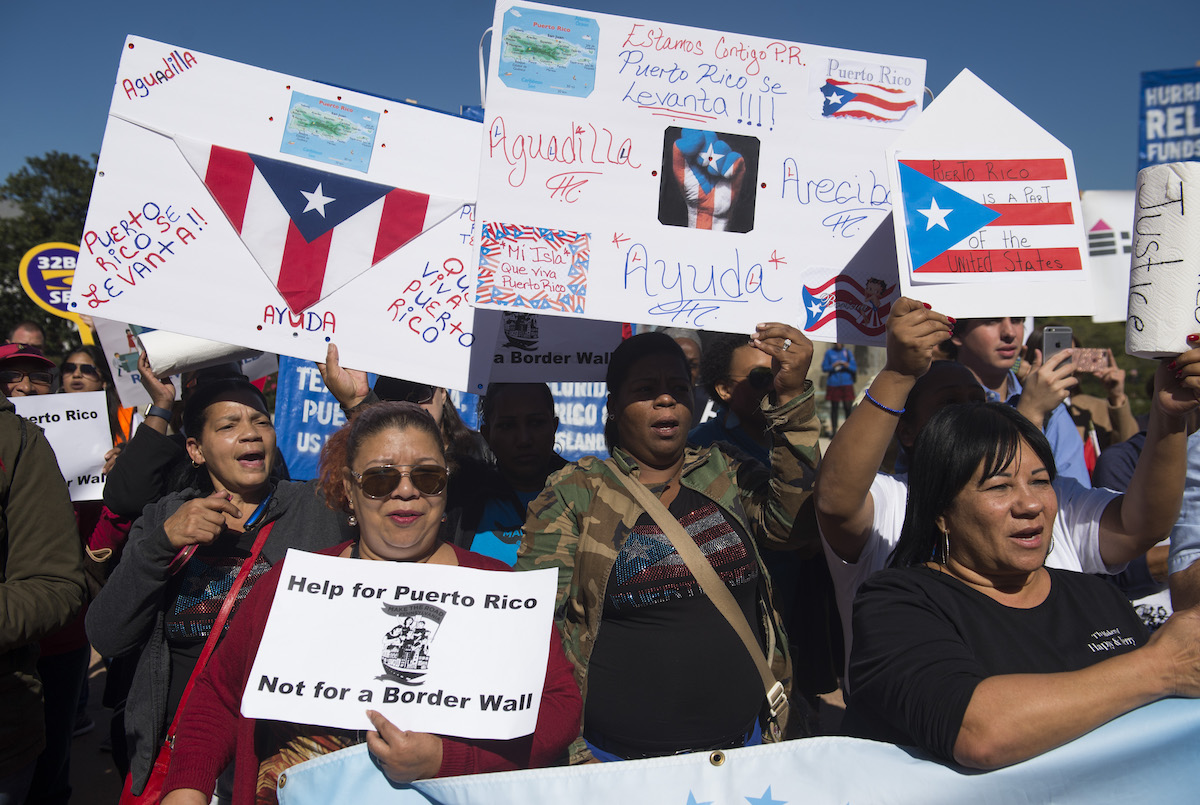 Demonstrators hold a protest to demand more recovery assistance for areas hit by recent hurricanes, including Puerto Rico from Hurricane Maria, during the "March for Just Recovery," on Capitol Hill in Washington, DC, on October 18, 2017. (SAUL LOEB/AFP/Getty Images)

Hundreds of protesters are expected to gather in Washington, D.C. on Tuesday, March 20,  the six-month anniversary of Hurricane María, to denounce the ongoing humanitarian crisis in Puerto Rico and to urge exhaustive aid for families on the island and the mainland.

Protesters will gather for a rally at the headquarters of the Federal Emergency Management Agency (FEMA) and then march towards several congressional offices to voice their demands. The event is organized by Power 4 Puerto Rico, a coalition made up of the Hispanic Federation and Center for Popular Democracy, among other community organizations.

“We believe that the ones responsible for the humanitarian crisis in Puerto Rico are Congress, the Trump administration, and FEMA. Their inaction and lack of attention has exacerbated the crisis,” said Samy Nemir Olivares, a spokesperson for the Center for Popular Democracy.

Power 4 Puerto Rico is demanding a comprehensive aid package, without any strings attached, that fulfills the estimated $95 billion experts say are needed for the island to recover. Last month, Senate leaders approved an aid package for Puerto Rico which allocated almost $20 billion in funds for recovery, but critics say it falls short of the money the island needs to recover. Puerto Rico asked for $14.7 billion to restore its obliterated power grid alone, but only $2 billion were assigned for that purpose.

According to Olivares, the rally will count with the presence of several families visiting from Puerto Rico and evacuees on the mainland who will speak about their experiences. Several lawmakers will also be present at the rally, including Rep. Nydia Velázquez (D-NY), Rep. Luis Gutiérrez (D-IL), and Rep. Adriano Espaillat (D-NY).

On Thursday, Velázquez made an impassioned speech on the House floor demanding more aid to Puerto Rico, speaking on behalf of her home town of Yabucoa, in which she says two-thirds of people remain without power.

“Sixteen percent of the island remains without power,” she said. “For those still on the island, they are suffering through the longest blackout in modern history.”

This will not be the first rally to gather in Washington, D.C. to bring attention to the humanitarian crisis in Puerto Rico.

In October, demonstrators gathered on Capitol Hill for the March for Just Recovery, and in November, hundreds of people marched from the Capitol and gathered in front of the Lincoln Memorial as part of the Unity March for Puerto Rico, which also called for support in disaster relief for the island. Gutiérrez and Velázquez were also present at that march, along with Hamilton creator Lin-Manuel Miranda.

Power 4 Puerto Rico has been organizing rallies on the 20th of every month since Hurricane María made landfall on September 20.

“Our mission is to sound the alarm on this ongoing crisis, ignite pressure, and demand help,” Olivares said.