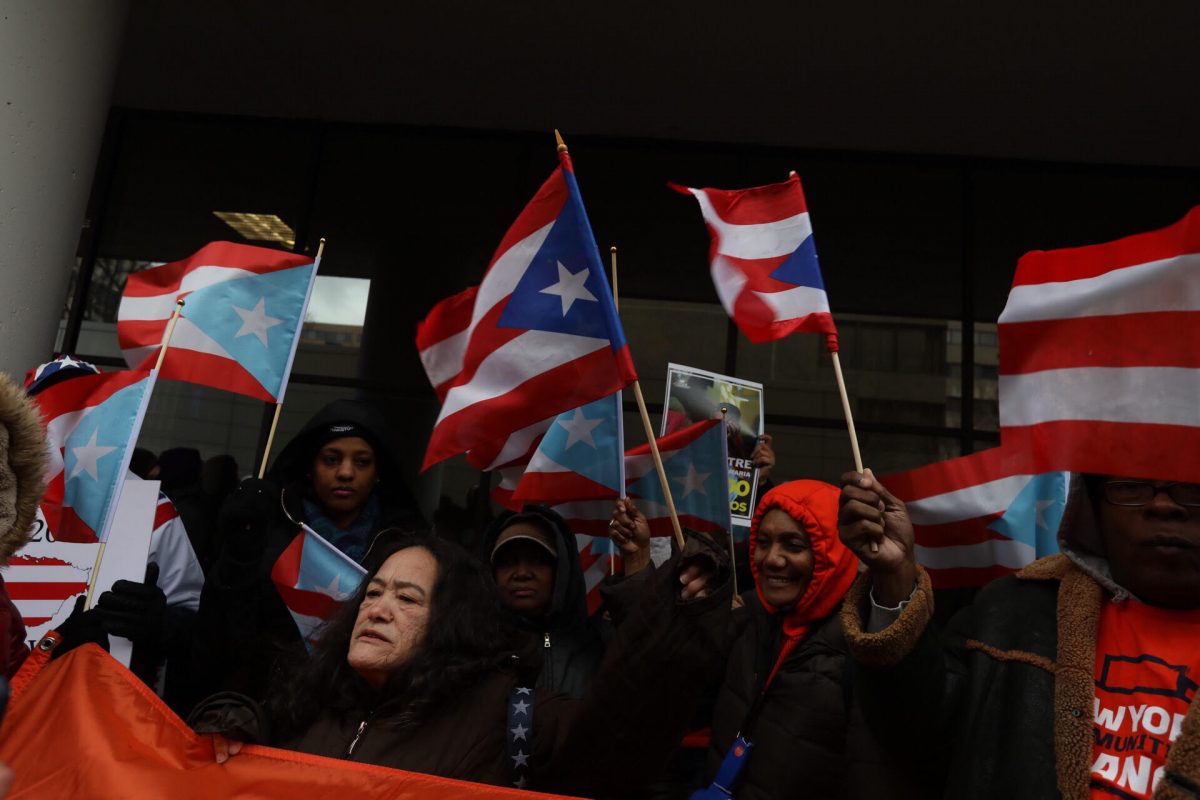 WASHINGTON, DC — On Tuesday, March 20, the six-month anniversary of Hurricane María’s landfall over Puerto Rico, around 200 to 300 people descended on the nation’s capital for the Rally for Puerto Rico, a day of action held by community organizers, Puerto Rican families, elected officials and celebrity allies to denounce the federal response to the humanitarian crisis on the island and demand comprehensive aid.

The crowd gathered in the late morning under pouring rain, cold and sleet, to protest in front of the headquarters of the Federal Emergency Management Agency (FEMA), and then marched to the Hart Senate Office Building on Capitol Hill to visit several Senate offices, and finally settled at the Senate rotunda for a sit-in which resulted in the arrests of about 25 people.

The event was organized by Power 4 Puerto Rico, a coalition made up of the Hispanic Federation and Center for Popular Democracy, among other community organizations.

Gabriel Lebrón, 23, from Alexandria, Virginia, showed up early on his day off despite the rain to beat the crowds. This protest wasn’t the first one the Puerto Rican native had been to since Hurricane María’s landfall over Puerto Rico on September 20: he was also present at the Liberty March for Puerto Rico on November 19, but noted this rally felt different.

“Even without considering the weather, there is a somber tone. People are not just asking for help, we are genuinely angry,” Lebrón told Latino USA. “We are all here because we’re here for Puerto Rico.”

From the crowd, a number of black Puerto Rican flags, which were a symbol of resistance on the island months before the hurricane, stood out from a sea of red, white, and blue. One group of protesters even brought an infamous blue FEMA tarp, which they used to shield themselves from the rain.

At the rally in front of FEMA’s headquarters, several lawmakers condemned the agency’s inaction and the Trump administration. Sen. Kirsten Gillibrand (D-NY) urged FEMA not to leave until “every family has what they need to survive and to provide.”

“Life, liberty, and the pursuit of happiness applies to all American citizens,” Gillibrand said, prompting cheers from the crowd. “Every single one.”

“We will not rest until every boricua who has had to leave the island can return to their homeland, their home, their family, to their people,” Gutiérrez said.

Six months after the hurricane, nearly one in ten Puerto Ricans remains without power, according to data provided by the government of Puerto Rico. Power 4 Puerto Rico is demanding a comprehensive aid package, without any strings attached, that fulfills the estimated $95 billion experts say are needed for the island to recover.

“Puerto Ricans are still going hungry and don’t have power, water, shelter or medicine,” Julio López, Director of Puerto Rico Diaspora Campaigns at the Center for Popular Democracy, said in a press release. “The fact that families on the island and the mainland don’t have the aid required to recover should be a source of shame for the Trump administration and every Member of Congress.”