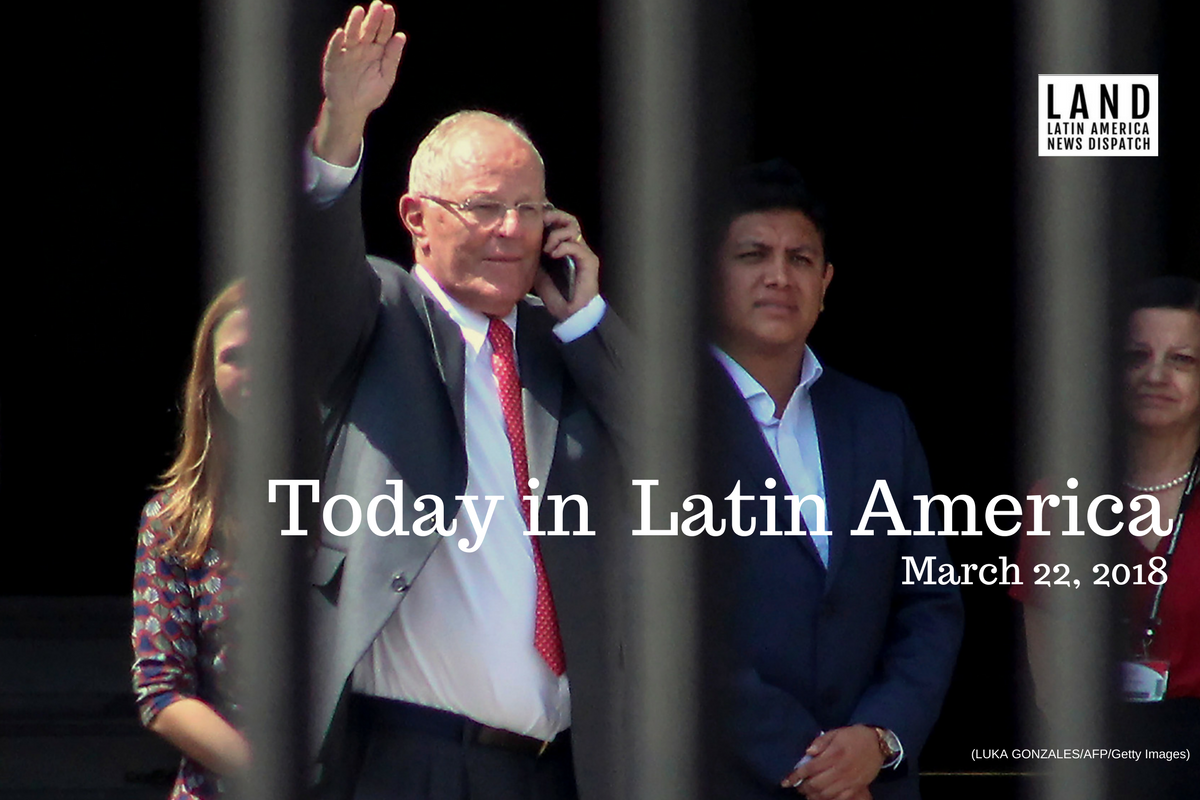 Peruvian President Pedro Pablo Kuczynski (L), waves before leaving the Palace of Government in Lima, after recording a televised message in which he announced his resignation on March 21, 2018. (LUKA GONZALES/AFP/Getty Images)

Peruvian President Pedro Pablo Kuczynski resigned yesterday amid corruption accusations. On Tuesday, footage had been leaked by right-wing opposition party Popular Force allegedly showing Kuczynzki’s allies trying to buy the vote of an opposition lawmaker to avoid impeachment that was set to be voted on tomorrow. The secretly-taped videos appear to show three former opposition lawmakers now turned government allies, including Kenji Fujimori, the son of the former president, trying to lure a lawmaker into voting against impeaching the president in exchange for profitable state contracts.

The scandal was just the tip of the iceberg for Kuczynski’s presidency. He’s accused of lying about his involvement with Odebrecht, a Brazilian construction firm at the heart of multiple corruption scandals in Latin America, and of pardoning former President Alberto Fujimori of human rights violations in exchange for votes against an earlier impeachment vote.   Congress could decide not to accept his resignation and impeach him anyway, as it did when Fujimori resigned in 2000 and fled to japan.

Kuczynski, who was in office for less than two years, will be replaced by Vice President Martín Vizcarra.

The chief delegate for the United States in the NAFTA renegotiation, Robert Lighthizer, described the possible victory of frontrunner Mexican presidential candidate Andrés Manuel Lopez Obrador as a “political risk” for U.S. investors. Lighthizer said the Trump administration will not act as a provider of “political risk insurance” to protect private investments by its citizens in Mexico, and that each business must take it’s own risks.

Los Alamitos, a suburb of  California’s Orange County, is attempting to get legal clearance on a resolution passed on Monday to exempt the city from state sanctuary laws limiting local cooperation with immigration agents. While the Trump administration is going to court claiming the sanctuary laws violate the constitutional precedence of federal laws over state laws, Los Alamitos is trying to contradict state laws from below.

This week Trinidad and Tobago swore in its first woman president: Paula Mae Weekes. In the country’s parliamentary system, the president is the Head of State and is elected by an Electoral College composed of members of parliament from nominees proposed by the government, which is headed by a Prime Minister. Trinidad and Tobago is the only republic in Latin America and the Caribbean to have a woman head of state after Chile’s Michelle Bachelet left office on March 11.

The Costa Rican government will use money seized from drug trafficking for patients battling addiction. The first contribution of approximately  $880 thousand dollars will be given to the Social Security Service.

The Miss Venezuela beauty pageant, one of the most popular in the world, has been suspended as the organization behind it investigates claims of corruption and prostitution. The probe was sparked by a recent wave of insults among former contestants on social media, including accusations that some participants stole charity money and others received presents from businessmen and government officials in exchange for sexual favors.

Authorities in Ecuador believe a rogue group from the now-demobilized Revolutionary Armed Forces of Colombia, or FARC, is responsible for the killing of three soldiers this week. The governor of the northwestern province of Esmeraldas, where soldiers were attacked on Tuesday, said yesterday that Colombia has failed to control guerrilla activity in the region, allowing the FARC dissidents, who are involved in drug trafficking, to attack authorities on both countries.

Millions of people were left in the dark yesterday after an apparent power plant malfunction caused a massive blackout in Brazil, affecting 14 out of the country’s 26 states, or about 22 percent of the population. The blackout was mostly felt in the northern and northeastern states, but more populous states like São Paulo and Rio de Janeiro also had some temporary outages.