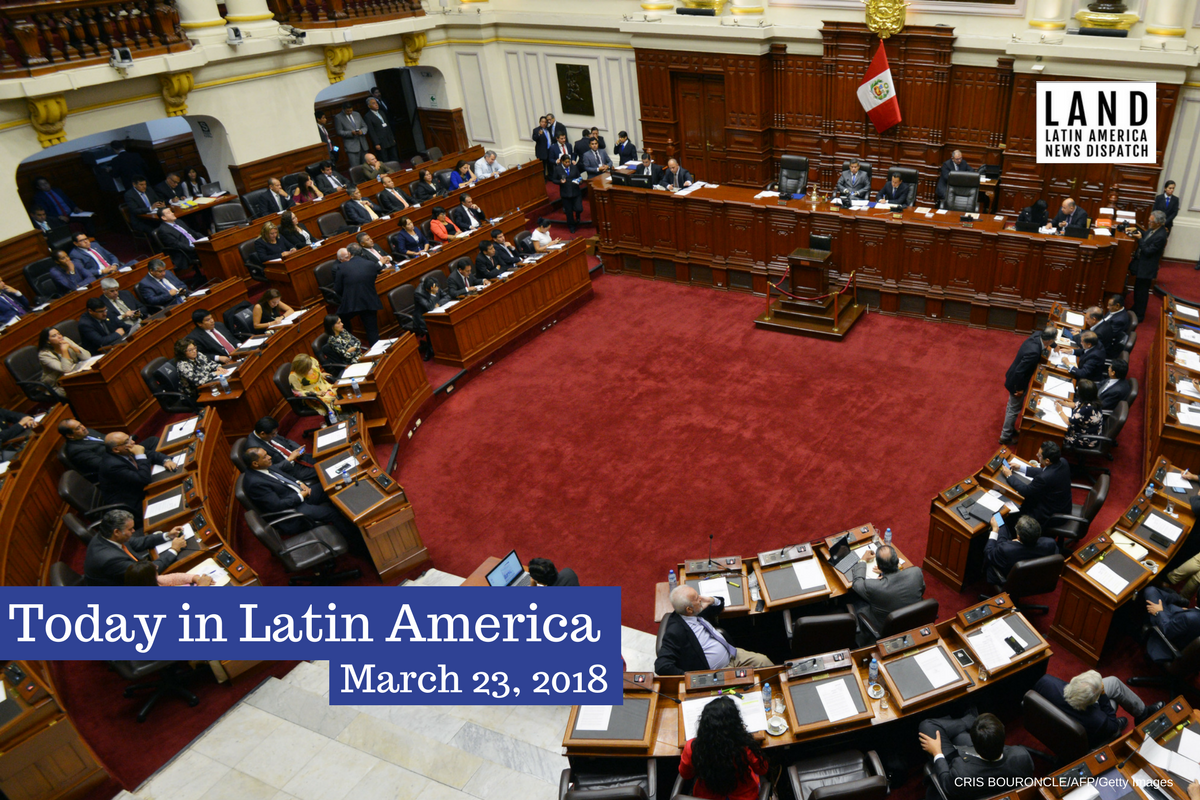 Peruvian lawmakers hold a session at the Congress in Lima, to discuss whether to accept President Pedro Pablo Kuczynskis resignation on March 22, 2018. (CRIS BOURONCLE/AFP/Getty Images)

Lawmakers in Peru began to debate yesterday whether to accept President Pedro Pablo Kuczynski’s resignation or to go ahead with his impeachment. Meanwhile, federal prosecutors requested Kuczynski be barred from leaving the country if he’s removed from office, as he would then lose presidential immunity and become vulnerable to prosecution.

Kuczynski maintains he is innocent both of the corruption allegations that prompted the impeachment procedure and of the vote-buying accusations from this week, and said he is resigning to give political stability to the country. He denies being involved with his private consulting firm when it accepted $782,000 a decade ago from Odebrecht, the Brazilian construction firm involved in Latin America’s biggest corruption scandal, and claims that footage that allegedly shows his allies offering public contracts in exchange for votes had been edited in an incriminating way.

The Colombian and Argentine presidents said they would not attend the Summit of the Americas that is set to be held in Peru next month if the government falls. But Venezuelan Vice President Diosdado Cabello, who celebrated Kuczynski’s resignation with fireworks, said that his country is now free to attend the summit from which it had been uninvited by the Peruvian president.

The Trump administration said yesterday it would temporarily exempt Argentina, Brazil and other allies from the harsh aluminum and steel tariffs going into effect today. However, the U.S. government is considering quotas to avoid “too much foreign metal” from coming into the countries. Mexico and Canada were granted exemptions earlier this month.

The state of Veracruz in Mexico reported yesterday the third journalist assassination in the country in 2018. Leobardo Vázquez, who was from the town of Gutiérrez Zamora, had written for various news outlets and maintained a local news page on Facebook. Reporters Without Borders ranks Mexico, which saw 10 journalists killed last year, as the deadliest country for the media in the Western Hemisphere.

Eight people were killed and at least 11 were injured when a criminal group opened fire at a bar in Purísima del Rincón in the Mexican state of Guanajuato. Among the fatal victims was the father of Ysmael López, mayor of a neighboring town.

Six months after Hurricane Maria brought deep damage to Dominica, with flooding and ferocious winds killing more than 30 people, crumbling roads, toppling trees and downing power lines, the Caribbean island is slowly starting to recover. Routes and transportation have been restored, as well as the majority of tourism attractions, which represent an important and growing industry on the small republic.

April 22, 2019, will mark the day when Belize bans all single-use plastic products such as bags, straws and throw-away cutlery, according to a proposal approved this week. Two of the leading touristic communities in the country, San Pedro and Placencia, are leading the initiative. The decision comes after the government imposed a permanent moratorium on offshore oil exploration last year.

Dogs were often honored in ancient Guatemala, but new research suggests that Mayans may have also had a taste for canines. A team of anthropologists and archeologists, who analyzed chemical traces found in animal bones from Ceibal, one of the most important Mesoamerican cities, found that some dogs were actually fed a maize-based diet—an indication that they were being raised for slaughter. Though the findings are compelling, some researchers are calling for more work to confirm them.

Cambridge Analytica, the British political consulting firm accused of improperly using Facebook data to influence voters in the 2016 U.S. elections, has also done work in Argentina, Brazil, Mexico and Colombia, where legislative, local and presidential elections have been held in the past few months or are set to be held later this year. Brazilian and Argentine authorities just launched investigations into possible illegal actions by the firm.

A 14-year-old rape victim died this week while giving birth in Paraguay, where abortion is only legal when the mother’s life is endangered. The man who raped her was only arrested yesterday, a day after her death. The case has brought new attention to the strict abortion laws in the country, where nearly 900 girls between 10 and 14 years old gave birth in 2015, the Guardian reports.