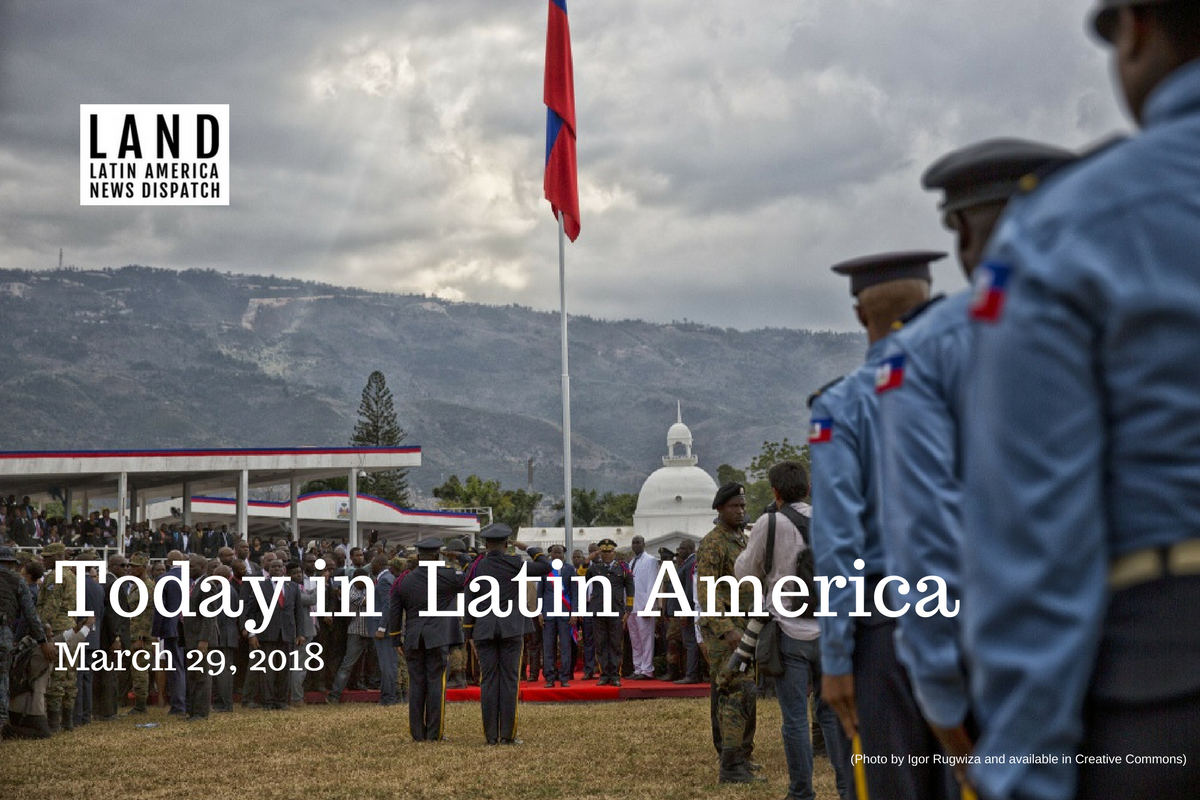 Haitian President Jovenel Moïse reviews national police troops at the presidential palace after he was sworn in as the 58th president at the parliament building in Port au Prince on 7 February 2017. (Photo by Igor Rugwiza and available in Creative Commons)

Haiti’s new army started to take shape this week as President Jovenel Moïse installed a controversial seven-member high command despite condemnation by some in the United States and in Haiti itself.

At least six members of the group were soldiers during a 1991 military coup and once had their assets frozen by the U.S. for helping overthrow Haiti’s first democratically elected president, Jean-Bertrand Aristide. One of these men,  Col. Jean Robert Gabriel, is the alleged mastermind behind the killing of thousands Aristide supporters in a 1994 military raid in Raboteau, Gonaives. U.S. Sen. Patrick Leahy, a Vermont Democrat, told the Miami Herald, “we should not support an institution led by people with their history.”

That army was disbanded in 1995, leaving the national police in charge of security for the following two decades. Moïse has said that the new army will respect the rule of law and will serve the people by building roads, responding to natural disasters and securing the border, among other tasks.

Six suspects were arrested in Nuevo Laredo, Mexico for the killing of a journalist. Carlos Domínguez Rodríguez was stabbed on January 13. Investigators do not believe this case is linked to organized crime and the murder-suspects are allegedly independent journalists, according to local media reports.

In a rare conviction case, two Mexican police officers were convicted for the murder of a journalist in Veracruz in January 2015. Six other police officers and the town of Medellín de Bravo’s mayor are also accused of involvement in the murder of Moisés Sánchez Cerezo. Sánchez’s son wrote that the conviction of two officers “is progress, but it is not justice.” Veracruz is known as one of the most dangerous places to be a journalist in the western hemisphere.

Jamaican lawmakers unanimously agreed this week to extend a state of public emergency in the St. Catherine North police division, south of Kingston, until July 3. The initial declaration was announced on March 18 as a two-week period to curb gang violence in that region. More than 130 people were killed in St. Catherine North last year and dozens of murders have already been recorded this year.

A U.S. federal control board yesterday demanded Puerto Rico make cuts to its troubled pension system, with public employees getting an average reduction of about 10 percent. The board, which is overseeing Puerto Rico’s finances as part of the U.S. territory’s bankruptcy process, also wants Gov. Ricardo Russell to abolish Christmas bonuses and hiring incentives for employers.

At least 68 are confirmed dead due to a prison riot fire in Valencia, Venezuela late last night. Venezuelan human rights leaders are demanding an investigation into the riot, and the Venezuelan Prisons Observatory says it has repeatedly warned about severe hunger and overcrowded cells in Venezuelan jails.

Ecuador cut off WikiLeaks founder Julian Assange’s internet access at the Ecuadorean embassy in London, where he has lived for the past six years to avoid extradition to Sweden. The Ecuadorean government said that Assange had violated a 2017 agreement not to interfere with other states  and “put at risk the good relations [Ecuador] maintains with the United Kingdom, with the other states of the European Union, and with other nations.” The government had warned Assange several times after they feared he was meddling in the U.S. election after Hillary Clinton’s emails were leaked.

Gunshots apparently hit two campaign buses of former President Luiz Inácio Lula da Silva during a political tour in southern Brazil earlier this week. No one was hurt and Lula was not in either of the buses, which were carrying guests and journalists. Lula da Silva is attempting to run for president again but recent corruption charges make it likely that he will be barred from the race.