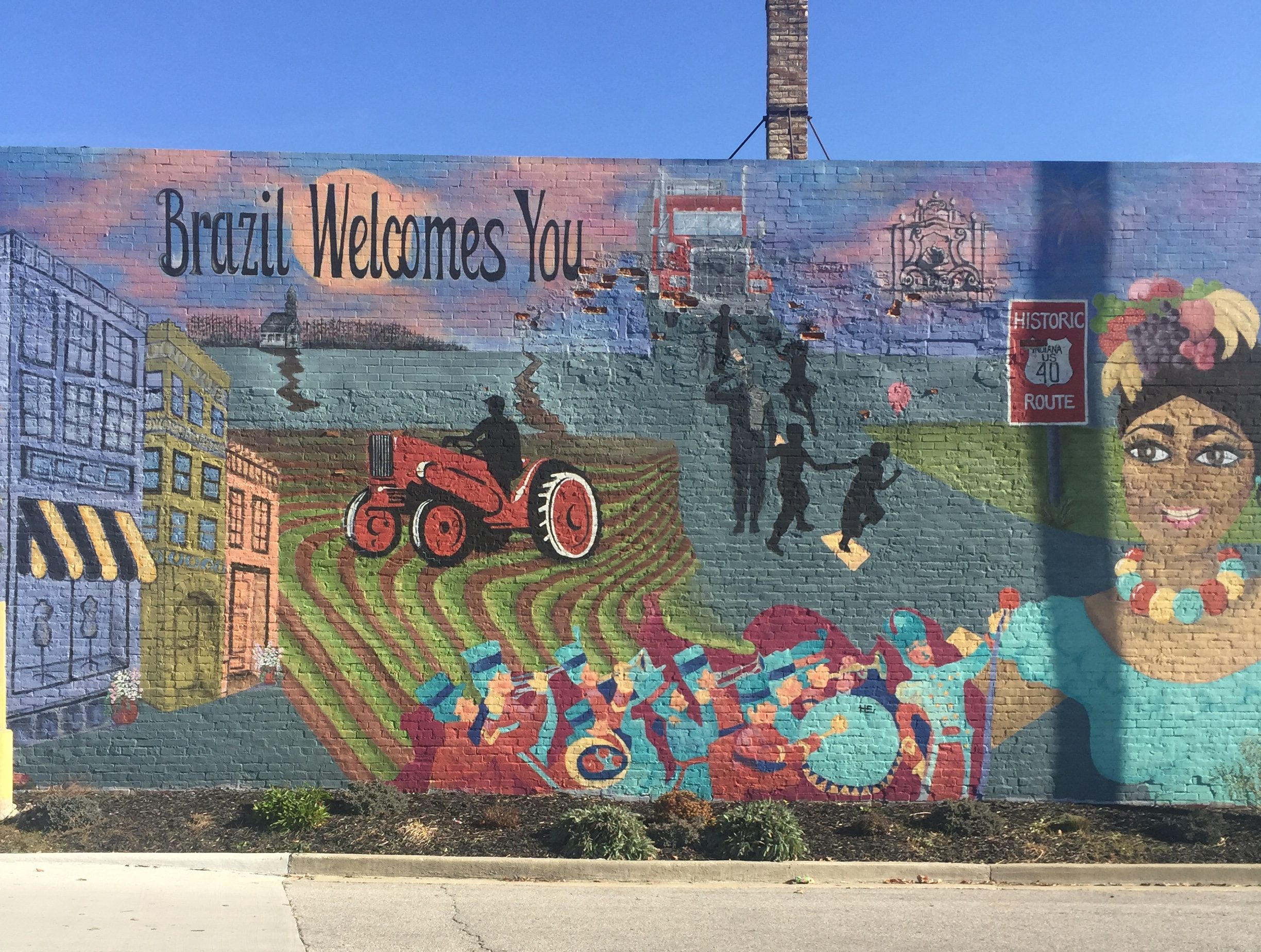 A welcome sign in Brazil, Indiana. (Photo by Jessica Villagomez)

BRAZIL, INDIANA — Stories of small-town America are tucked in residential street corners, much like the one long-term Indiana resident Kerrie McMillan lives on.

McMillan has lived in Brazil all of her life and works as a manager of the local Dollar General just blocks away. The homes on her street are relatively small, but well-decorated. McMillan, the self-proclaimed decorator of the town, takes pride in the atmosphere she’s created both inside and outside of her home. A wooden sign with black handwriting identifies the home of “The McMillans.” She lines her porch with tinsel and colored lights frame her doorway. Her abundance of decorations comes paired with a desire to, above all, spread the joy.

McMillan acts as a connector in town—a person who just seems to know everyone and everything. She knows when and how she can help someone out with their problems. Whether it be getting clothes or shelter, assisting with bills or feeding their families, McMillan knows who can help. If she can’t herself, that is.

She tells stories of helping a local woman get shoes for her son and partnering with her neighbor who runs a clothing closet at a local church.

People like McMillan represent the kind of heartland values that Midwestern American towns are known for. But Brazil differs from the average small American town. Though a sign saying “Be Kind to Each Other” welcomes the handful of cars and trailers carrying cargo into the town of 8,000, since 2013 Brazil has also been home to an institution that many see as quite unwelcoming.

That would be the state’s only federal immigration detention center.

Brazil, which is part of Clay County, is located just 60 miles away from Indiana’s largest metropolis, Indianapolis. About 29 percent of individuals live below the poverty line and a majority of residents are white, according to Census data. In the 2016 presidential election, 75 percent of Clay County voted for Donald Trump.

Over the past few years, thousands of undocumented immigrants facing deportation proceedings have been housed in Brazil’s Clay County Jail, which sits just across the street from where McMillan and her husband live.

The presence of the jail itself frequently goes unnoticed.

The biggest change since she moved near the jail, she jokes, is having the facility’s antennas interfere with her cable.

“We’ll see the inmates doing their service outside but we don’t hear the. We’ll see them loaded and shipped off,” McMillan said. She’s not bothered by living near a jail and Immigration Customs Enforcement (ICE) detention facility. “It’s just another cream building at this point.”

In a financially struggling town where most homes and businesses are bucolic yet weathered and peeling, the jail offers a striking contrast. The freshly renovated cream-colored building towers over residential areas and nearby shuttered businesses.

Jason Frazier, a patrol sergeant at the Clay County sheriff’s office, has been with the department for 14 years and also lives in Clay County with his family.

Like McMillan, Frazier spoke highly of Brazil, calling it a “great place to live.” Frazier said most of the crimes in the town are drug-related, with thefts and petty crimes being the main source of arrests.

“For the most part, there’s nothing dramatic, our murder rate is probably one every five years or so,” he said.

Frazier said the community trusts the police force. Everyone knows everyone, so when something seems out of the ordinary, people will frequently call with tips or concerns.

“This job itself would be a lot harder if we did not have the support of our community,” he said.

Frazier said the addition of immigration detainees has not changed daily life for him or other officers at the jail.

But, other aspects of the jail have changed. The jail staff expanded to accommodate federal regulations for ICE detention centers. According to the 2011 Operations Manual outlining ICE’s National Detention Standards, facilities housing immigrants in federal custody must adhere to certain regulations.

The immigration detention center based at the jail can host up to 60 detainees at any time, while the jail itself can hold 176 inmates. Clark said the number of detainees fluctuates because many detainees are held temporarily in the jail and then transferred to Chicago for detention proceedings and deportations.

The facility receives a per-diem housing fee to hold immigration detainees from ICE. Though Clark would not specify the fee amount, he confirmed that it is between $50-$60 per inmate per day.

“We can have two one day and then 60 the next,” he said of the number of detainees in the facility.

In total, Clark said that there are 22 full-time and 20 part-time employees at the jail dealing with immigration detainees.

“What is unique about the ICE program is that it offsets some of the costs, so we make money having detainees here,” Frazier said.

But who are the detainees that are held in the facility? According to data released by ICE, 1,419 total individual immigrant detainees were placed in detention at Clay County Jail in 2015, the most recent year for which data is available.

Detainees are noted to have committed a variety of 130 different crimes, with Driving Under the Influence (DUI), traffic offenses and domestic violence charges topping the list. Records also show that 120 detainees did not have a “most serious” criminal conviction on their record. ICE spokesperson Manda Walter said that the charges do not determine whether someone will be deported, but they do influence immigration proceedings.

“The kind of condition or charge does impact removability,” she said. “It’s a piece, just like if you would go to court for something, maybe your character is evidence or maybe your past history. It’s one piece that the judge considers.”

Walter said that just like any federal judge would do in a case, collective evaluation of past crimes and convictions influence the outcome of a case and can influence whether someone is deported.

Though Brazil is not necessarily indicative of national statistics, only 179 of the charges noted for the 1,419 immigrant detainees were for drug-related offenses.

About a third of the detainees in Brazil are labeled as DUI offenders, under local, county or state statutes, which often differ for issues including driving under the influence, with some states’ statutes much stricter than others.

In Indiana, penalties for DUIs are based on blood alcohol level, age and prior convictions, according to Indiana’s Bureau of Motor Vehicles. First-time offenders found guilty with a blood alcohol content (BAC) of 0.08 to 0.15 percent can face criminal misdemeanor charges, potentially resulting in a maximum imprisonment of one year, license suspensions and fines. Penalties increase with elevated BAC levels or serious bodily injury. Of the 1,419 immigrant detainees held in Clay County Jail in 2015, 299 were labeled as DUI offenders. No specifics about the incidents leading to DUI charges were noted in the ICE data.

Traffic violations also ranked high on the list of offenses allegedly committed by immigrant detainees in Brazil, with 101 detainees labeled as traffic offenders. Traffic offenses under Indiana DMV regulations can include reckless driving, improperly changing lanes, driving too closely behind another vehicle, violating a state law of texting while driving and driving without a proper license. Detainees in Brazil would also have likely been arrested for traffic violations in other states.

ICE facilities must classify detainees based on threat and safety level, for purposes of housing them in detention, Walters said. However, there is no standardized classification process across facilities, according to the 2011 Operations Manual ICE Performance-Based National Detention Standards.

According to the document, staff should complete the classification process and assign classifications based on reference points and facts including, criminal history and evidence found in the detainees record.

Lieutenant Ryan Cannon, who works with Clay County Jail detention facilities, said that the facility does not use numerical threat levels to classify detainees but rather uses a “high-level” to “low-level” offender distinction.

Walters noted that federal judges —not ICE officials— ultimately decide whether someone will be deported.

“ICE’s mission is to protect the country of the United States from cross-border crime and illegal immigration that threatens national security and public safety,” Walters said.

“A Great Place to Live”

Safety and affordability are the two driving factors for Brazil residents who have stayed in the town all their lives. Lifelong resident Robert Cox has lived in Brazil for 42 years and is now enjoying his retirement after a career as a restaurant manager at Hardee’s.

“It’s my hometown and a mighty fine place to live,” Cox said.

Cox, who said he is legally blind, lives just blocks away from Hardee’s. He loved his job and enjoyed talking to his regular customers. The people he got to know over the years are what made his job, and Brazil, so great, he said.

“It’s just a quiet town, there’s too much violence in the big cities,” Cox said. “Murders and violence and everything else. Here, there’s some but not very much. It’s a quiet community here.”

Cox said he knew most of his neighbors and has people who check up on him. But he feels that people tend to be “more in a hurry” now than before and don’t take the time for fostering community.

Another resident, Andrew Brock, moved to Brazil with his wife and children nine years ago from Clearwater, Florida, after his father, who works as a pastor, got a job in town. Brock cited the sense of community as one of the town’s greatest appeals. Brock also lived blocks away from the detention facility but did not notice it much at all, he said.

“I coach Little League and travel soccer so I think meeting other parents and getting to know people in the community and stuff like that, that’s what makes a close-knit community,” he said.

High school sports contribute to a sense of affinity, with the town rallying behind different sports teams in every season. Brock said you can find “everybody in town” at a football or basketball game.

Compared to Florida, in Brazil, homes and streets are closer together and that influences how neighbors interact with one another.

While housing is affordable, the commercial scene is not so rosy. Like many small towns across the heartland, the mom-and-pop businesses that were once a staple of local life have closed down. There are few places to go out to dinner or see a movie in Brazil, so residents end up spending their dollars elsewhere.

“You see a lot of the businesses that were around when I was a kid gone,” said McMillan, 38. “It’s just completely different from what it was.”

“If you’re getting a $12 an hour job here in Brazil, you’re good,” McMillan said. Many of her friends struggle to find jobs at even that rate.

Terre Haute, Indiana, which is just a 20 minute drive from Brazil, is home to Indiana State University and offers work in several sectors, including health services and manufacturing, according to the Terre Haute Economic Development Corp. As in Brazil, locking people up also provides economic stimulus. A federal prison in Terre Haute is one of the town’s largest employers, employing 830 people, according to the development corporation.

But the economic effects of the immigration detention center in Brazil have not lived up to the expectations of many residents.  McMillan says few people she knows work at the facility and it did not produce an impact on the local economy.

Residents like McMillan, Cox and Brock want to stay in Brazil because of the small-town feel and sense of security. They would like to see investment in businesses within the community’s boundaries, and jobs serving locals rather than major companies in other towns, or the country’s detention systems.

2 thoughts on “A Look at the Midwestern Town of Brazil, the Home of Indiana’s Only Immigration Detention Facility”