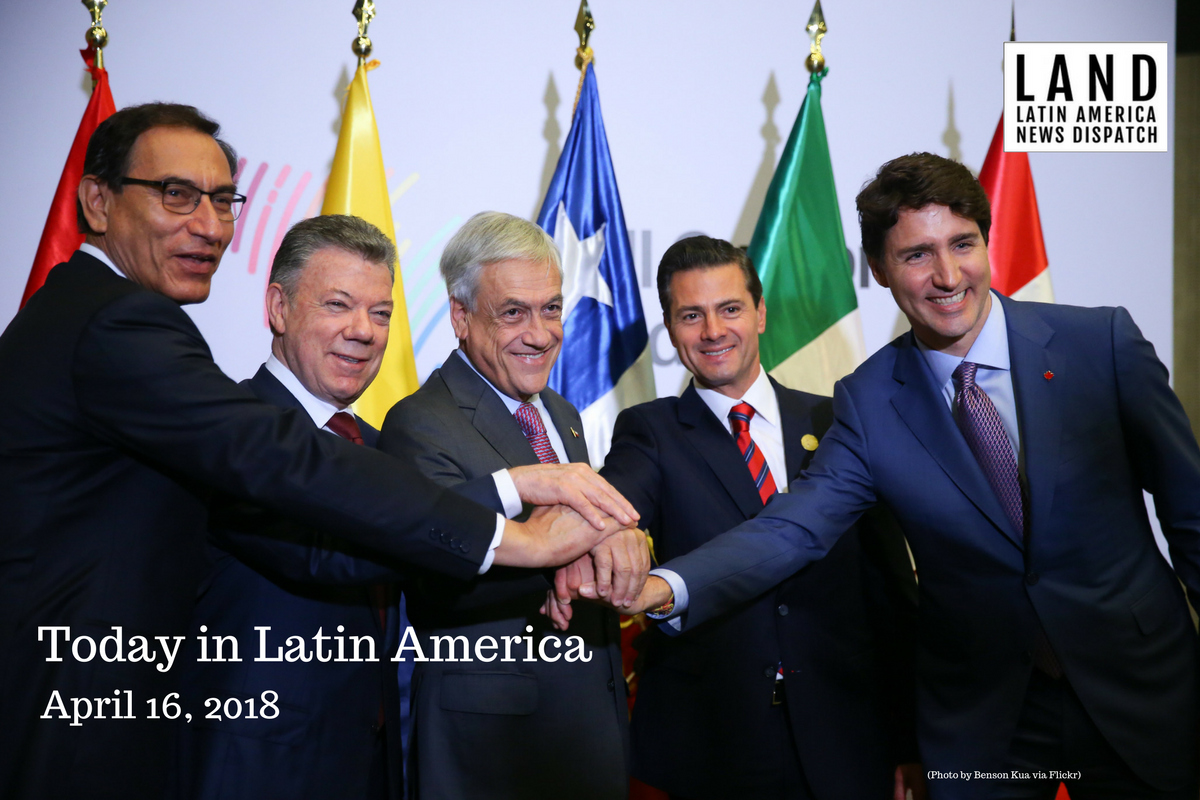 Leaders of Peru, Colombia, Chile, Mexico and Canda at the VIII Summit of the Americas in Lima, Peru. (Photo from Presidencia Perú/Flickr)

PERU – The Summit of the Americas, where the heads of states of the Organization of American States, or OAS, come together every three years, was held in Peru’s capital this past weekend. With a formidable list of leaders absent, including those of the United States, Venezuela, Ecuador, Paraguay, Guatemala, El Salvador and Cuba (which is not part of the OAS but had been invited to the last summit) the summit in Lima was notably subdued. Adding to this, the leaders of Brazil, Mexico and Colombia, three of Latin America’s most populous countries, are going to be stepping down from office within a year. President Trump was the first U.S. president to skip the summit since Bill Clinton founded it in 1994.

Peruvian President Martín Vizcarra opened the summit on Friday by calling for a list of measures to prevent corruption in the hemisphere. On Saturday, U.S. Vice President Mike Pence and the leaders of 15 other mostly conservative-run nations called on Venezuela to hold transparent presidential elections and on the U.N. to alleviate the country’s humanitarian crisis.

The renegotiation of trade deals was another theme of the conference. U.S. Vice President Pence said the U.S. will possibly reach a North American Free Trade Agreement deal with Canada and Mexico “within the next several weeks.” And Mexican President Enrique Peña Nieto said that “the door is open” for the U.S. to join the Pacific Rim trade deal despite Trump’s initial rejection of it.

UNITED STATES: The Texas Board of Education announced its approval of statewide academic standards for a Mexican-American history course for high school students on Friday. The course has been under debate for years in Texas, which was once Mexican territory and today has a majority Hispanic high school population. The board decided to name the course “Ethnic Studies: An Overview of Americans of Mexican Descent” instead of the proposed “Mexican-American Studies”, which was greeted with concern by some advocates.

UNITED STATES: A previously deported former U.S. army paratrooper was granted U.S. citizenship in San Diego on Friday, marking a rare victory for U.S. immigration rights advocates. Héctor Barajas, who was most recently deported to Mexico in 2010 and is the founder of the Deported Veterans Support Home in Tijuana, is the second deported veteran to be pardoned by California Gov. Jerry Brown. There are hundreds and perhaps even thousands of other veterans deported from the U.S., according to the American Civil Liberties Union.

MEXICO: Approximately 500 members of the Holy Week Central American migrant caravan headed northward in a scrap metal train departing from Tultitlan, Mexico on Saturday. Irineo Mújica, director of Pueblos Sin Fronteras, said that the migrants are en route to the Mexico-US border and that they hope to be considered for asylum by the Trump administration. The majority of migrants in the caravan, which initially comprised of over 1,500 members, have chosen to stay behind in Mexico City, Puebla and Toluca.

GUATEMALA: Yesterday, a referendum vote was held in Guatemala to decide a long-standing territorial dispute with neighboring Belize. With 95.3% of the tables in, the “Yes” option obtained 95.83% of the votes, meaning that the dispute will be taken to the International Court of Justice, or ICJ. The popular consultation was marked by low voter turnout—only 16% of the Guatemalan electorate participated. After Belizeans hold their referendum in May, the ICJ is expected to resolve the territorial dispute in seven years.

NICARAGUA: After raging for nine days and scorching over 13,500 acres (5,500 hectares), a forest fire has been put out in Nicaragua, authorities said on Friday. 1,500 workers from five countries helped extinguish the fire in the Indio Maíz Biological Reserve, near Nicaragua’s southern border with Costa Rica, Vice President and first lady Rosario Murillo said. No casualties were reported during the incident.

PANAMA: Panama’s government announced it plans to build a train line to Costa Rica with Chinese capital. The 450-kilometer train would require an initial investment of $5 billion, President Juan Carlos Varela told Reuters last Friday during the Summit of the Americas in Peru.

BOLIVIA: Bolivia joined Russia and China in a vote in favor of a resolution condemning the recent U.S. strikes in Syria. The vote took place in the United Nations Security Council. Bolivia’s ambassador, Sacha Llorenty, stated that “you can’t combat the alleged violation of international law by violating international law.”

ECUADOR: Ecuador’s President Lenín Moreno confirmed on Friday that three press workers who were kidnapped along the country’s border with Colombia had died. Moreno’s statement came at the end of a 12-hour deadline for the captors to prove that the kidnapped individuals were alive. A group led by FARC holdout guerrilla Walter Arizala, known as Gaucho, claimed responsibility for the kidnappings.

BRAZIL: Jair Bolsonaro, one of Brazil’s leading candidates for the presidency, has been charged with racism by the country’s top prosecutor. Attorney General Raquel Dodge issued the charge after Bolsonaro compared descendants of slaves to animals, and further stated that the candidate promotes hate speech by attacking other groups. If convicted, he could serve up to three years in jail. He is polling in second place, after recently-jailed Luiz Inácio Lula da Silva, who is leading the polls comfortably despite his probable ineligibility to run for the presidency due to his jail sentence.