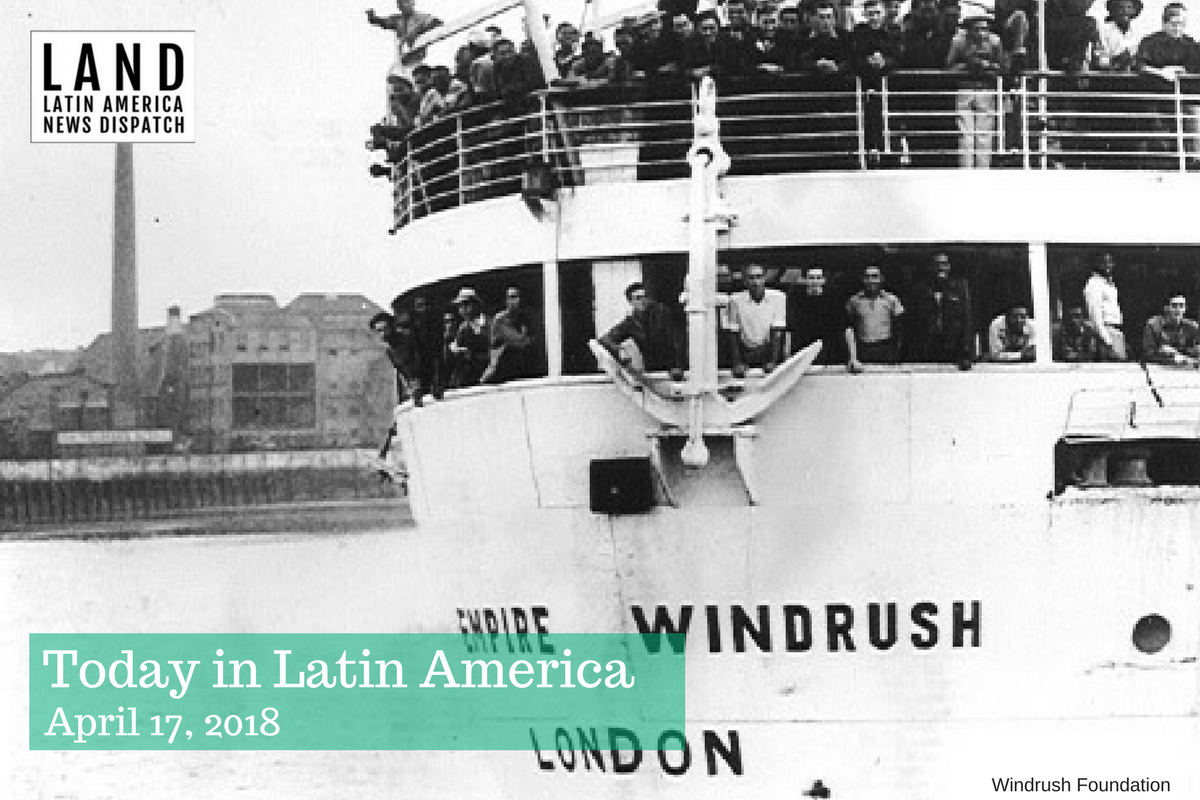 British authorities apologized yesterday for the “appalling” treatment of Caribbean immigrants of the “Windrush generation” who have been victims of the tightening of immigration laws in recent years. Interior Minister Amber Rudd recognized thousands of legal British residents are being denied basic rights like health services and are being threatened with deportation. The “Windrush generation” refers to immigrants who came to Britain from former colonies or newly created states invited by the government in the years that followed World War Two, and who before 1971 had an automatic right to settle.

More than 140 lawmakers signed a letter demanding the government clear the immigration status of these Commonwealth-born citizens, after in 2014 the U.K. silently removed a clause dating from 1999 that protected these long-term residents from being deported.

The scandal blew up as Britain prepares to host the annual Commonwealth Heads of Government later this week. Ministers expressed their interest in increasing trade with the 53 countries that make-up the Commonwealth in preparation to a post-Brexit scenario.

UNITED STATES: The White House said yesterday that California Gov. Jerry Brown rejected Trump’s initial request to enforce immigration laws at the Mexican border. On April 11, Brown pledged 400 troops to the National Guard but clarified they would not be deployed to do surveillance, maintenance or transportation of U.S. border agents, as is planned for the other border states, Arizona, New Mexico and Texas. California agreed to take funding from the federal government, but only to combat gang activity and the smuggling of drugs and firearms.

MEXICO: Protests sprouted in the border city of Mexicali, Baja California, in response to news of a large brewery being built. The multinational beer company marketed by Constellation Brands reached an agreement with the state’s public utilities commission to source 5.3 billion gallons of water a year from the city’s public water network. Residents fear there will not be enough to supply the entire city if the brewery proceeds with its plans. With the endorsement of the local government, the brewery is scheduled to be constructed over the next five years.

CUBA: Cuban authorities moved the presidential transition a day earlier. Tomorrow, President Raúl Castro is expected to pass the leadership to 57-year-old and current vice president of Cuba Miguel Díaz-Canel, the first non-Castro since the country’s revolution in 1957. Additionally, 605 newly-elected lawmakers will take the oath and elect the 31 members of the Council of State, its president and vice presidents, when the National Assembly meets in Havana.

PUERTO RICO: The 2017 blackout following Hurricane Maria is the largest in U.S. history and the second largest in the world, new research suggests. The analysis was conducted by Rhodium Group, a U.S.-based independent think-tank, which estimated that Maria has caused the loss of 3.4 billion customer-hours of electricity service. To this day, around 100,000 Puerto Ricans remain without power.

GUATEMALA: The re-trial of Guatemala’s former chief of police will open on Monday in a Swiss court. A Swiss-Guatemalan dual citizen, Erwin Sperisen was convicted to a life sentence in 2014 for ten extra-judicial killings in a Guatemala City prison between 2005 and 2006. Switzerland does not extradite its citizens but it is rare for it to take  them to trial for crimes committed in another country. The sentence was upheld in 2015, but in 2017 the Swiss Federal Court order a re-trial citing “arbitrary” and “incomplete” proof.

EL SALVADOR: The body of a Salvadoran journalist was found on Sunday after being reported missing since Saturday afternoon, El Salvador’s National Civil Police reported. Karla Lisseth Turcios, a 33-year old journalist that worked for El Economista, part of La Prensa Gráfica, was found on the Guachipilín highway in the department of Santa Ana, northeast of San Salvador.

ECUADOR: Ecuadorean President Lenín Moreno launched an offensive to find members of a breakaway faction of FARC rebels who allegedly killed two journalists and their driver after kidnapping them on March 26 in the locality of Mataje, which borders with Colombia. Moreno has offered $100,000 for information leading to the apprehension of the leader of this group, Walter Artízala, known as Gaucho.

COLOMBIA: A key witness in a trial against former president and current senator Álvaro Uribe was killed this weekend, even though Colombia’s Supreme Court had ordered increased security for him due to death threats. Carlos Enrique Areiza had admitted that he falsely accused Sen. Iván Cepeda, who for years has investigated the alleged involvement of the former president in the formation of far-right paramilitary groups, of bribing him to incriminate the former president and his close allies. In February, the Supreme Court cleared Sen. Cepeda of any wrongdoing and opened an investigation into Sen. Uribe for witness tampering.

BRAZIL: Speaking of the murder of Marielle Franco, Rio de Janeiro city councilwoman, Brazil’s Public Security Minister Raul Jungmann said that the most probable hypothesis to the crime pointed to the “work of Rio de Janeiro’s militias.” Rio’s militias are made up of former and current police officers that fight to control various areas of the urban center.

BRAZIL: Brazilian protesters occupied the apartment that was allegedly gifted to former President Luiz Inácio Lula da Silva as a bribe leading to his arrest and subsequent incarceration. Organizer Guilherme Boulos said on social media that “If this apartment indeed belongs to Lula, that means we are invited to stay, we have his permission. If it doesn’t, judges have to explain why they arrested him.” Protesters vacated the building after reaching an agreement with the police.