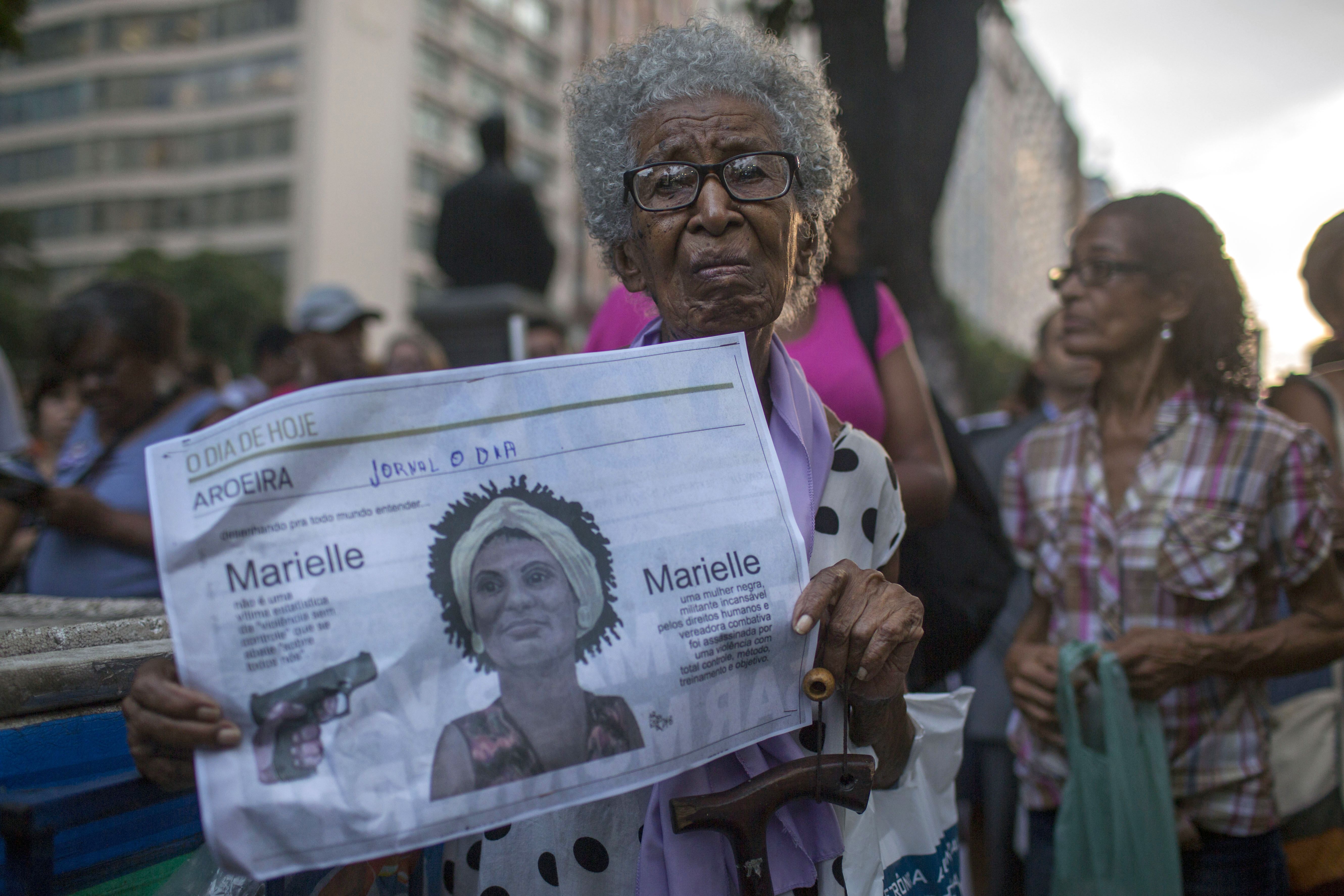 A protester shows a local newspaper during a demonstration against the murder of Brazilian councilwoman and activist Marielle Franco. Rio de Janeiro, Brazil. March 20, 2018. (Photo by Mauro Pimentel/AFP/Getty Images)

When Marielle Franco, a Rio de Janeiro city councilwoman, was shot to death in downtown Rio on March 14, her killing moved the world.

Elected in 2016 after serving 10 years on Rio’s human rights commission, Franco was proud to be a black lesbian born in one of the city’s poor neighborhoods, or favelas. She used her power as an elected official –her “collective mandate,” she called it– to hold Rio’s conservative government accountable to its most marginalized residents.

Franco was particularly critical of the city’s ineffective response to a surge of murders and police shootings in Rio’s mostly black favelas. Local activists have deemed these killings “black genocide.”

As a black Brazilian lawyer, I can see that Franco’s assassination –a recognized political crime that remains unsolved– has ruptured the dangerous silence surrounding race in this country.

That seems to be making some powerful people unhappy. On April 9, a Rio city councilman’s aide was also murdered. His boss had recently testified to police in Franco’s murder investigation.

Witnesses say the shooters told 37-year-old Carlos Alexandre Pereira Maria, who is black, that he should “shut his mouth.”

Brazil, where 54 percent of the population is black, has famously portrayed itself as a “racial democracy”–a society so diverse that racism simply cannot exist.

Black Brazilians earn, on average, 57 percent less than white Brazilians. They make up 64 percent of the prison population. Brazil’s Congress is 71 percent white.

Racism here goes back centuries. Brazil was not just a colonial slave empire–it was actually the last country in the Western Hemisphere to abolish slavery, in 1888. Before that, Brazil’s penal code imposed harsh punishment on enslaved people, including execution.

And when Afro-Brazilians finally gained legal rights in 1888, the government offered no reparations or financial support after 450 years of bondage.

In the 1910s, eugenics societies cropped up in São Paulo and Rio. Inspired by racist pseudoscience from the United States and Great Britain, these groups spurred a national movement to “improve the human race” by cleansing Brazil of “undesirable” blood.

Black people were top among the Brazilians that eugenicists proposed segregating from society, barring from entering the country or deeming “mentally defective.”

The racist underpinnings of the eugenicist movement would justify discriminatory practices in Brazil for decades to come. Brazil outlawed capoeira, an Afro-Brazilian martial art and dance, until the 1950s. It also made vagrancy illegal, which criminalized homeless and unemployed black people.

Brazil passed its first anti-discrimination policy in 1951, prohibiting businesses from refusing to serve customers based on race, a typical practice of that era.

The Brazilian government has since made several more attempts to promote racial equality.

A 2010 law aimed at redressing the wrongs of slavery ushered in a mild suite of affirmative actions. Today, Brazilian universities give some priority to black applicants and the government actively recruits black candidates for public sector jobs.

But racial bias remains potent. A 1988 survey in São Paulo, Brazil’s biggest city, found that 97 percent of respondents said they were not prejudiced. But 98 percent of people said they knew someone who was.

That impossible finding inspired the historian Lilia Moritz Schwarcz to coin the celebrated saying that, “All Brazilians see themselves as an island of racial democracy surrounded on all sides by racism.”

In 1995, 89 percent of survey respondents said they believed that racial bias existed in Brazil. Only 10 percent admitted that they held racist views. Results were similar in 2009.

Nationwide, 71 percent of the more than 60,000 people murdered in Brazil in 2017 were black, according to the think tank the Brazilian Security Forum.

Young black men in Rio’s poor favelas are far more likely to be among the hundreds shot each year by law enforcement. According to a report by Amnesty International, 79 percent of the 1,275 recorded killings by on-duty police officers in Rio between 2010 and 2013 were black.

Black women also live in a more dangerous world than white women. The number of black Brazilian women murdered increased 54 percent between 2003 and 2013. This happened despite a 2006 anti-domestic violence law credited with a 10 percent reduction in violence against white women.

So much for “racial democracy.” In purely legal terms, black Brazilians are equal to white Brazilians. But, in real economic, political and criminal justice terms, evidence confirms, they are not.

Still, the myth of racial democracy has endured.

A main culprit, in my opinion, is the country’s myopic focus on class. Brazilian policymakers and scholars consistently point to poverty and economic inequality as Brazil’s main social problems.

The predominant debate on class ignores race, gender and other salient factors that impact life in Brazil. It overlooks the fact that the majority of people facing poverty-related problems like gang violence, food insecurity, unemployment, limited access to education and homelessness are also black.

In my experience, Brazil’s strong emphasis on economic mobility also contributes to racism. As in the United States, many Brazilians believe that they live in a meritocracy. When black people struggle, white people may well think they just aren’t working hard enough.

Temer assumed office in 2016 after the controversial impeachment of the left-wing female leader Dilma Rousseff. One of his first acts as president was to shutter Brazil’s Ministry of Women, Racial Equality and Human Rights. Then he appointed an all-white, all-male cabinet.

On April 6, Temer’s government repealed legislation from the 1990s and 2000s that had recognized and legally protected Afro-Brazilian and indigenous culture and history.

This, in part, is how Brazilian structures of oppression remain invisible, largely unchallenged and – for white people, at least – easy to ignore.

Marielle Franco talked openly about race, violence and gender. It may be what got her killed.

But, in death, Franco’s message of equality has only grown louder.