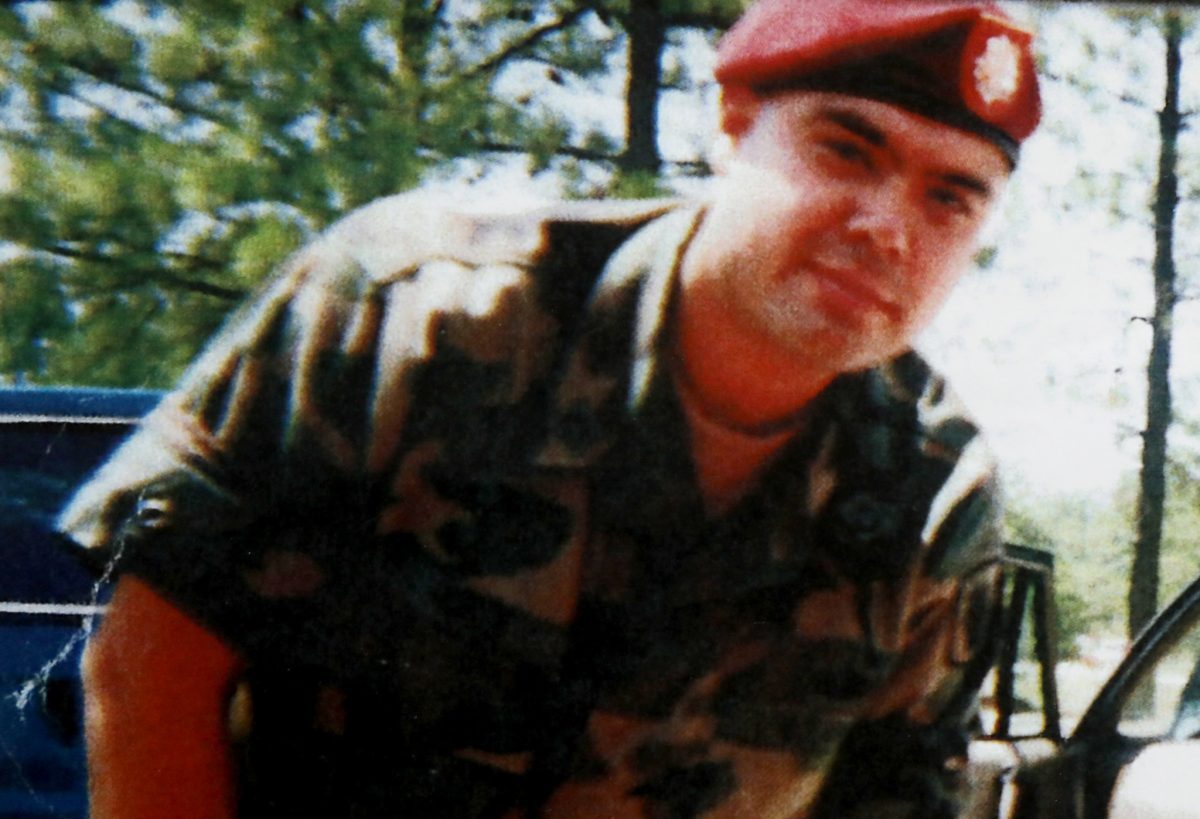 Army veteran Miguel Perez Jr, during one of his tours.

Afghanistan veteran Miguel Perez Jr. celebrated his 40th birthday last week surrounded by fellow veterans, happy to be free after spending nearly a decade in prison, but upset he was over 2,000 miles in Mexico away from his Chicago family.

“My birthday was great because I’m free but it’s bittersweet because I’m away from my family,” he said to Latino USA. “I’m still fighting to get back home. My family, friends and my community are there [Chicago].”

Perez was deported last month after a year-and-a-half-long battle with the immigration court system. He said he was left in Matamoros, Mexico, a border city across the bridge from Brownsville, Texas, without money or clothes. Perez says he was given a few doses of Prozac and two other medications that he takes to treat his PTSD. A fellow veteran traveled from Chicago to Matamoros to help Perez get to Tijuana, where he has been living since.

He also said he ran out of medications last week and has been experiencing withdrawals.

“I was skipping doses so that I could stretch the medication,” Perez noted, adding that his family and supporters in Chicago were trying to find a way to help him get the medication he needs.

Latino USA featured Perez’s story in February describing how the Afghanistan veteran, who was a legal permanent resident, ended up facing deportation. The episode also discussed his ongoing battle with PTSD.

He has been living in the house of another veteran who is based in San Diego and owns a second house in Tijuana. Yet, that’s only a temporary fix—the house where he is staying is usually rented out. He’s been looking for an apartment in a safe part of the city.  Perez said he even has a lead on an apartment, but job prospects are dim. He is looking for work at a call center, where the salary is low. Throughout all of this, he said he’s also very concerned about having access to mental health services.

Perez moved to Chicago when he was eight years old. He considers himself a Chicagoan. He enlisted in the army and was deployed to Afghanistan after the 9/11 terrorist attacks. When he came back from the war, he experienced PTSD but couldn’t find proper treatment at the VA hospital. He said soldiers with more visible injuries were given priority. Perez started using drugs to cope with the nightmares and flashbacks. During that time, he reconnected with a friend from high school who sold drugs. Perez was caught with that friend in 2008 trying to sell drugs to an undercover police officer. He pleaded guilty to a felony drug charge and was sentenced to 15 years in state prison.  He said his criminal defense attorney did not explain the implications that guilty plea would have on his legal immigration status.

President Bill Clinton signed the 1996 Illegal Immigrant Reform and Immigrant Responsibility Act, which among other things, made it easier to deport legal permanent residents who commit certain types of crimes. A 2010 report by the International Human Rights Law Clinic at the University of California Berkeley  states that 68 percent of the legal permanent residents deported committed a minor and/or a nonviolent crime.

Friends and supporters of Perez argue that his case fell through the cracks and he shouldn’t have been deported because he was entitled to expedited citizenship.

While Perez was on his first tour in Afghanistan in 2002, President George W. Bush signed an Executive Order to make it easier for legal permanent resident serving in the military to become citizens. But Perez’s commander never told him about the executive order or the steps he needed to follow. Perez said he just assumed he had become a citizen. His lawyer, Chris Bergin, had previously told Latino USA that the government also failed Perez because the VA didn’t provide adequate treatment for this PTSD, and Perez’s drug conviction is related to his untreated PTSD.

Despite all, Perez said he wants to continue fighting to someday go back to the city he calls home. But while that happens, he’s concentrating on working with other veterans to make this issue becomes more visible for other Americans.

“I take it one day at a time,” he said. “I concentrate on helping out other [deported] veterans and giving them words of hope.”