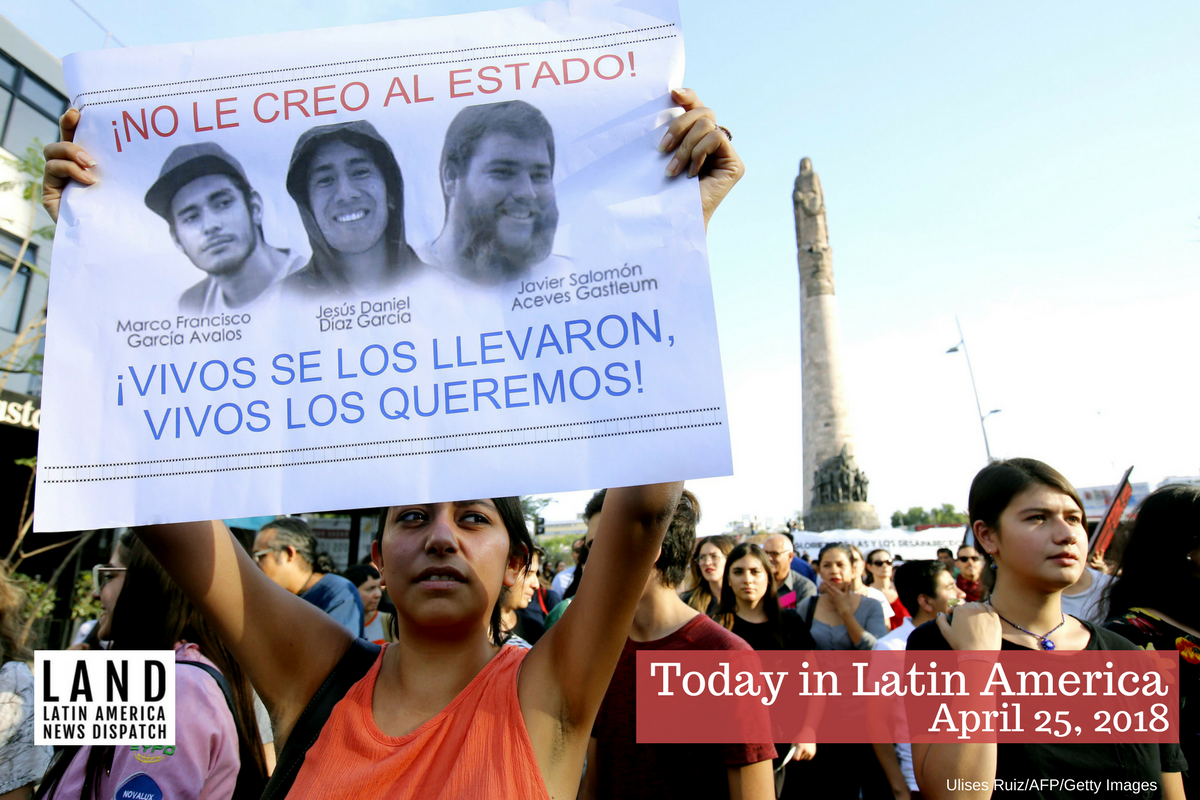 Mexican students take part in a protest against the violence in Mexico and the murder of three students from the University of Audiovisual Media of Guadalajara, in Guadalajara, Jalisco state, Mexico, on April 24, 2018. (Ulises Ruiz/AFP/Getty Images)

MEXICO: New findings revealed by Jalisco’s attorney general office late Monday show that three missing film students from Guadalajara —the capital of the state— were abducted, killed and their bodies dissolved in acid while working on a school project in the outskirts of the city. Officials said that the students were presumably mistaken as rival gang members and kidnapped last month by the New Generation Cartel gang while filming on family property in rival gang territory. The three students, Javier Salomón Aceves Gastélum, Marco Francisco García Avalos and Jesús Daniel Díaz García, were in their early twenties.

The New Generation cartel is one of Mexico’s most powerful criminal gangs and controls large areas of the Jalisco state. The kidnapping case had drawn national attention to Mexico’s ongoing violence crisis and had become a symbol of Mexico’s approximately 30,000 missing people. The case also resonates with the 43 disappeared students in the southern state of Guerrero in September 2014, in which critics allege an elaborate cover-up from several levels of the Mexican government.

The President of Mexico’s National Human Rights Commission Luis González Pérez expressed his grief over another case concerning “people who have a future, who are studying, who are working for Mexico.” Members of Mexican film institutes and candidates for the July 1st presidential elections also expressed their condolences to the students’ families.

MEXICO/UNITED STATES: An Arizona jury found Border Patrol agent Lonnie Swartz not guilty of second-degree murder and declared a mistrial on a lesser charge of manslaughter in a case regarding the 2012 killing of 16-year-old José Antonio Elena Rodríguez. Swartz shot from the U.S. side of the border into Mexico, hitting Rodríguez 10 times. A partial video of the shooting shows Swartz continuing to shoot at Rodríguez even when he was on the ground. According to officials, Rodríguez was throwing rocks at Border Patrol agents preceding the shooting.

MEXICO: Mexico’s National Security Commissioner Renato Sales said yesterday that authorities arrested a suspect in the case of the 2017 killing of award-winning journalist Javier Valdez. Sales added that Valdez was killed because of his journalistic work. Valdez, who was internationally recognized by his writing, covered stories regarding drug cartels in the state of Sinaloa and published an interview with Dámaso López, Joaquín “El Chapo” Guzmán’s right-hand man, weeks prior to his murder. Mexico remains one of the deadliest countries for press workers.

UNITED STATES: Yesterday a federal judge announced that DACA, the program that has protected thousands of young immigrants from deportation, will remain instated and that the Trump Administration must resume accepting applications. The U.S. Department of Homeland Security has 90 days to restate their arguments to end DACA, which the judge has described as “meager legal reasoning” that failed to adequately prove why DACA is supposedly unconstitutional.

CUBA: Yesterday Cuban mining company Geominera S.A and the Canadian mining company Millbrook Minerals signed an agreement to allow mineral exploration in three provinces in central Cuba. The director of the Cuban company Ángel Vázquez stated that the project is expected to create new jobs in the provinces of Villa Clara, Cienfuegos and Sancti Spíritus and that if the extraction venture is “positive” then the two companies will associate entities and create a multinational venture that will jointly oversee the extraction of deposits for mineral concentrates in Cuba.

NICARAGUA: Hoping to relieve social tensions, the government of President Daniel Ortega released dozens of student protesters and allowed private broadcasters to return to the air again, after censoring them during the violent repression of street protests last week that left a toll of over 25 dead, including a journalist. Police authorities said that the students were delivered to relatives or priest committees, but videos circulating in social media show beaten students with shaved heads being dropped off at the outskirts of Nicaraguan capital Managua. Other countries expressed their concern over the events and condemned the state’s violence.

EL SALVADOR: Police arrested the domestic partner of murdered journalist Karla Lisseth Turcios, whose body was found April 14 in a field off a highway some 60 miles northeast of Salvadoran capital San Salvador. According to police authorities, Turcios’s domestic partner, Mario Huezo Portillo, was caught by cameras while disposing of the body of the 33-year old journalist.

GUATEMALA: Analysts and opposing legislators criticized the decision to create a National Friendship Day between the Central American nation and Israel. The decree was approved by Guatemala’s Congress’s on April 19 with 104 out of the 158 possible legislators voting in favor. The initiative is largely considered a diplomatic attempt of Guatemala to ingratiate itself with Israel weeks before moving its embassy from Tel Aviv to Jerusalem.

COLOMBIA: Alias Pablo Beltrán, one of the leaders of the ELN left-wing guerrilla group, said yesterday that the new country that is chosen as a location to continue the peace talks after Ecuador pulled out has to guarantee that the representatives of the group will not be  extradited to the United States. Beltrán argued there’s an “express decision of the U.S. government of going against the Colombian peace process”. This is a reference to the arrest two weeks ago in response to an extradition request by the U.S. government of FARC leader alias Jesús Santrich.

COLOMBIA: After a nine-day-long armed strike declared by the EPL holdout dissidence in its fight with the ELN guerrilla group in the Catatumbo region on the northern border with Venezuela, the EPL  announced a three-day truce to allow residents of the 11 towns that make up the area to purchase basic supplies.

BRAZIL: Yesterday hundreds of indigenous groups gathered in Sao Paulo to demand that the government protect their lands from the occupation of business corporations. Around 1,000 individuals were reported to have gathered in Brasilia and the organizers of the protest expect the group to grow to 3,000 over the course of the week. Last year, protest from the Free Land Encampment turned into a clash between police forces and indigenous activists.