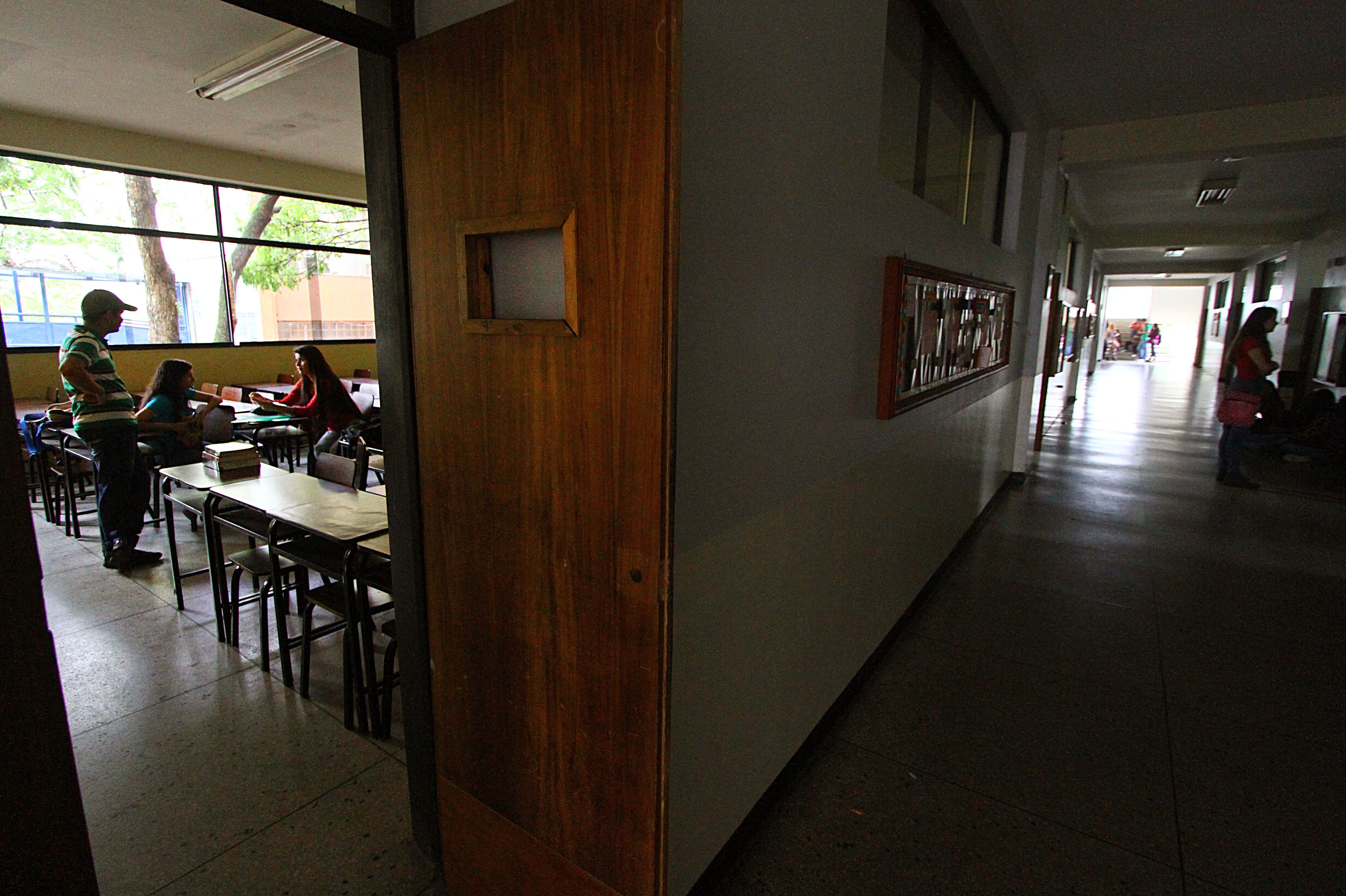 Students attend a class at the University of the Andes in San Cristobal, Tachira state on March 23, 2018. (Photo by George Castellanos/AFP/Getty Images)

CARACAS – The main campus of Universidad Central de Venezuela, located on the west side of Caracas, is one of the icons of the nation’s capital. Built in the 1940’s and declared a UNESCO Heritage Site, it’s here where all kinds of students come to study in one of the 40 departments that make up the Venezuela’s oldest and largest universities.

UCV is the flagship public university—a few others, of similar size, scope, and structure exist in different regions. They not only offered free education for undergraduate students; In most cases they had a cafeteria free for students and faculty members, access to health services, and their own citywide bus system, all subsidized by the government.

But like everything else in Venezuela, colleges and universities have been deeply affected by the ongoing social and economic crisis. One that affects the current education of college students and also puts into jeopardy newer generations of professionals.

Alejandro Terenzani, head of the Department of Social Communications, has been teaching at UCV for 27 years. From working with a budget set in 2008, to classes that spent up to two months without a professor, the picture he paints is grim and the problems plenty.

“There’s no cafeteria, because the budget ran out. It was set up for three months and there’s nothing left. So, there’s no place to eat,” he told Latino USA. “There’s no way to arrive here. The university buses, which used to be many and constant, are now few and irregular.”

“Many times, a student drops out because they can’t afford it,” Terenzani adds, with some pain. Between a four-digit inflation and the shortages of basic goods, many young people are forced to work to support themselves and their families or simply decide to migrate.

According to data provided by the university authorities, UCV went from having 47,000 undergraduates almost a decade ago to 32,000 in 2017. And the same pattern can be seen elsewhere. For instance, Universidad del Zulia in western Venezuela reported an average of 400 students dropping out every month.

And students aren’t the only ones leaving. In 2017 alone, 1,200 college professors resigned from Universidad Simón Bolívar, the other major public university in Caracas. The same situation is seen all over, and it’s becoming increasingly difficult to find proper replacements.

In most cases, many of these jobs are occupied by a contrast of middle-aged to senior professors, some out of retirement, and recently graduated students who teach a college class as their first job.

Many times, they are forced overwork themselves in order to teach several classes. Sometimes they also find themselves teaching two or three combined groups. And most of those who teach, do it for solidarity to the institution, knowing there’s a probability that no one would replace them if they left.

The professors and educators certainly don’t do it for the salaries, which in most cases is erratic and, in some colleges, barely cover the expenses required to give a class.

In Early April, the government raised the salary for college professors and employees by 50%. However, this wasn’t met with joy or excitement—due to the speed of Venezuelan inflation, by the time many of them can actually cash their money, which can take up to 6 months, it will probably be less than the value of their current salary.

And this situation doesn’t fare any better outside Caracas, with public universities working with less resources and facing a deeper decay than in the capital.

In the Andean region, Universidad de los Andes had to suspend classes on Bioanalysis and Pharmacology until further notice due to shortages. Also, in the last few months, ULA has had an average of three-to-six-hour blackouts per day, which was met with several protests by the students.

Universidad de Carabobo, in central Venezuela, passed an emergency class schedule to address crime, which has forced most universities to finish activities before sunset. Last December José Corado, the university’s Dean of Health Sciences, was detained by robbers at his office and taken to his residence, were he was tied up while the thiefs emptied his place.

His response to the emergency schedule was an effusive rant against what he perceived was a generalized indifference and a passive submission, not only to the problems of UC or any other university, but to the ongoing crisis itself:

“What are we doing?” he said, demanding that university members protest, “We need an active stoppage.”

From six universities and 11,000 college students in 1958 to 770,000 students in 145 institutions in 2001, college education has come a long way in Venezuela. The have  withstood military dictatorships, some which closed them down for years, and evolved from cloisters for the colonial elite to symbols of social mobility and educational democratization.

As forecasts of the future become bleaker, these institutions must endure in order to continue to shed light over what for many Venezuelans is the country’s darkest hour.