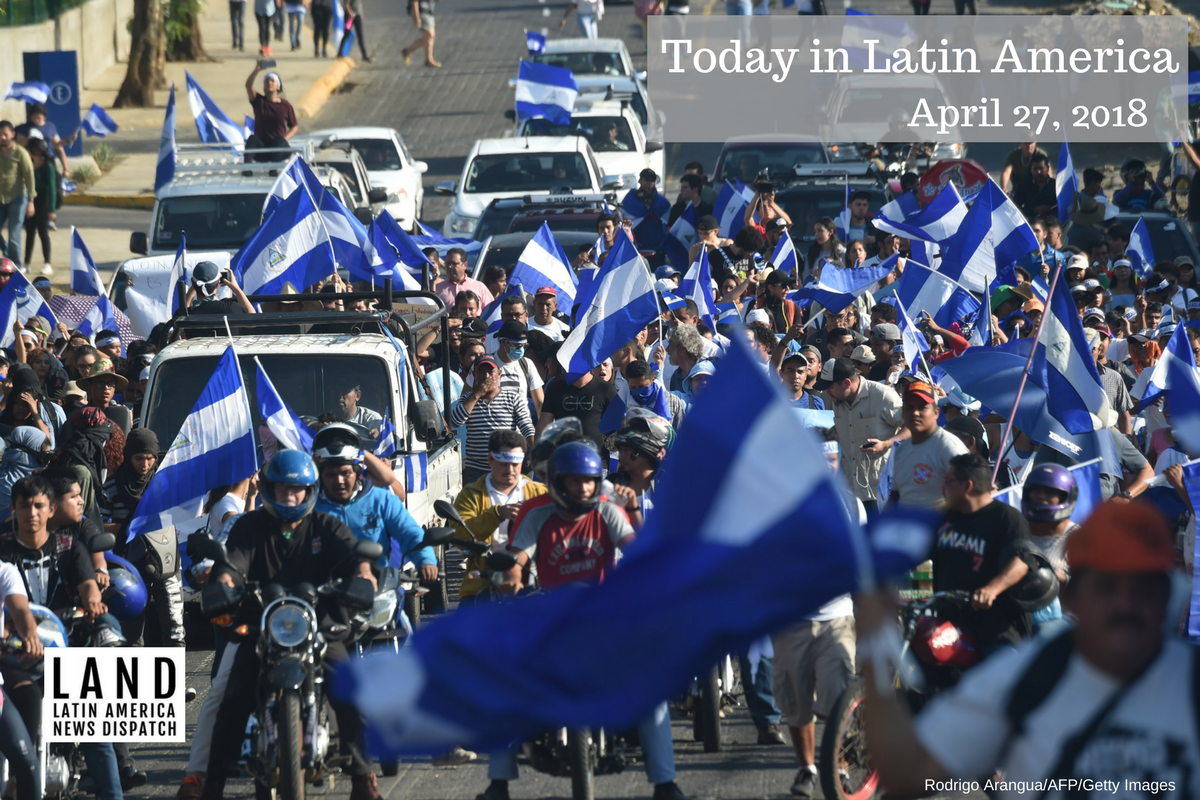 Students march during a protest against the government of President Daniel Ortega, in Managua, on April 25, 2018. (Photo by Rodrigo Arangua/AFP/Getty Images)

NICARAGUA: An independent human rights group claimed yesterday that security forces killed 63 people during nationwide protests that started last week. According to the Permanent Commission on Human Rights, which says it has been gathering information from local networks across Nicaragua, security forces also disappeared at least 15 people and shot an additional 160. As recently as Wednesday, the Nicaraguan Center for Human Rights, or CENIDH by its Spanish initials, had placed the death toll at 34. Earlier that day, the United Nations human rights office said it had received “credible reports” of at least 25 deaths. The latest government release, put out Monday, acknowledged that 12 protesters had been killed.

“What took place was a massacre against students, against the people of Nicaragua,” said Permanent Commission director Marcos Carmona, speaking yesterday at a press conference in Managua. CENIDH President Vilma Núñez has accused President Daniel Ortega’s government of “state terrorism.” Reports of torture, particularly within prisons, have been widespread.

Led primarily by students, protests broke out last week in response to a government-backed pension reform, which would have hiked payments for workers and reduced benefits on retirees. After ordering a violent crackdown on what he described as “chaos, crime and looting,” President Ortega, a leader of the Marxist Sandinista revolution who has since accumulated significant wealth and executive power, canceled the reform on Sunday. But protesters, incensed by the government’s repressive tactics, remained in the streets, expanding their demands to include new elections. In the interest of seeking a peaceful resolution, the Catholic Church has agreed to mediate talks with the government, though participants and a negotiating agenda have yet to be determined.

MEXICO: State and federal authorities are conducting a joint-investigation into the disappearance of six young men—three of whom went missing on April 4, and three more who disappeared two days later while looking for the first group. Burnt husks of the vehicles that transported the two groups were found together on the side of a highway Wednesday. According to family members, the first group had an encounter with local police before leaving an annual festival in Oaxaca to return to the neighboring state of Veracruz.

UNITED STATES/MEXICO: A second group of 175 people arrived in Tijuana yesterday, joining the caravan of roughly 175 other migrants who intend to claim asylum in the United States. Facing White House threats of immediate prosecution and deportation, the caravan is preparing to meet with immigration lawyers on Friday and Saturday for a free workshop ahead of a planned Sunday border crossing.

DOMINICA: Nearly eight months after Hurricane Marie toppled power lines and destroyed the island’s infrastructure, Dominica’s electricity company says it will not be able to provide full coverage by April, a deadline that had been set by the company in November.

COSTA RICA: The men’s national soccer team is aiming to leave a green footprint on the 2018 World Cup. The government forestry service announced Wednesday that the Costa Rican soccer federation will buy bonds to protect 3,100 acres of national rainforest, in an attempt to offset the nearly 300 metric tons of carbon emissions the delegation is expected to generate during the quadrennial tournament.

PERU: The Constitutional Court ordered that former president Ollanta Humala and his wife Nadine Heredia be released from prison, where they have spent the past nine months. The former president and first lady have been accused of receiving $3 million in bribes from disgraced Brazilian construction giant Obredecht, but prosecutors have still yet to bring formal charges, a delay that the court determined to be in violation of due process. Prosecutors fear that Humala may follow his predecessor, Alejandro Toledo, who fled to the United States when he was accused of receiving $20 million from Obredecht.

COLOMBIA: Between January and March, 46 social leaders and human rights defenders were killed in Colombia, a 130 percent increase compared to the same period last year, according to a new report by the humanitarian organization We Are Defenders. In 35 cases, those responsible have not been identified. Four killings have been attributed to the Colombian security forces, three to neo-paramilitary groups, two to FARC dissident groups and two to ELN rebels.

BRAZIL: Luiz Inácio Lula da Silva’s former finance minister, Antonio Palocci, reportedly struck a plea deal yesterday with federal investigators in exchange for testimony that Lula, as the recently jailed ex-president is known, accepted bribes from construction firm Odebrecht. Palocci, who was also chief of staff under ousted President Dilma Rousseff, was arrested in 2016 and sentenced to 12 years for running a bribing racket to raise money for Lula and Rousseff’s Workers’ Party.

BRAZIL: Violence has increased since the military was placed in charge of public security in Rio de Janeiro state two months ago, according to a report released yesterday by Rio’s Candido Mendes University. Researchers at the Intervention Observatory found that multiple shooting deaths had gone up by more than 300 percent compared to the same period last year, while the number of overall shootings also exceeded that registered during the two months preceding the military’s intervention. The report came one day after a judge ordered the release of 137 of the 159 suspects arrested earlier this month in an operation against a favela militia group, citing a lack of evidence.