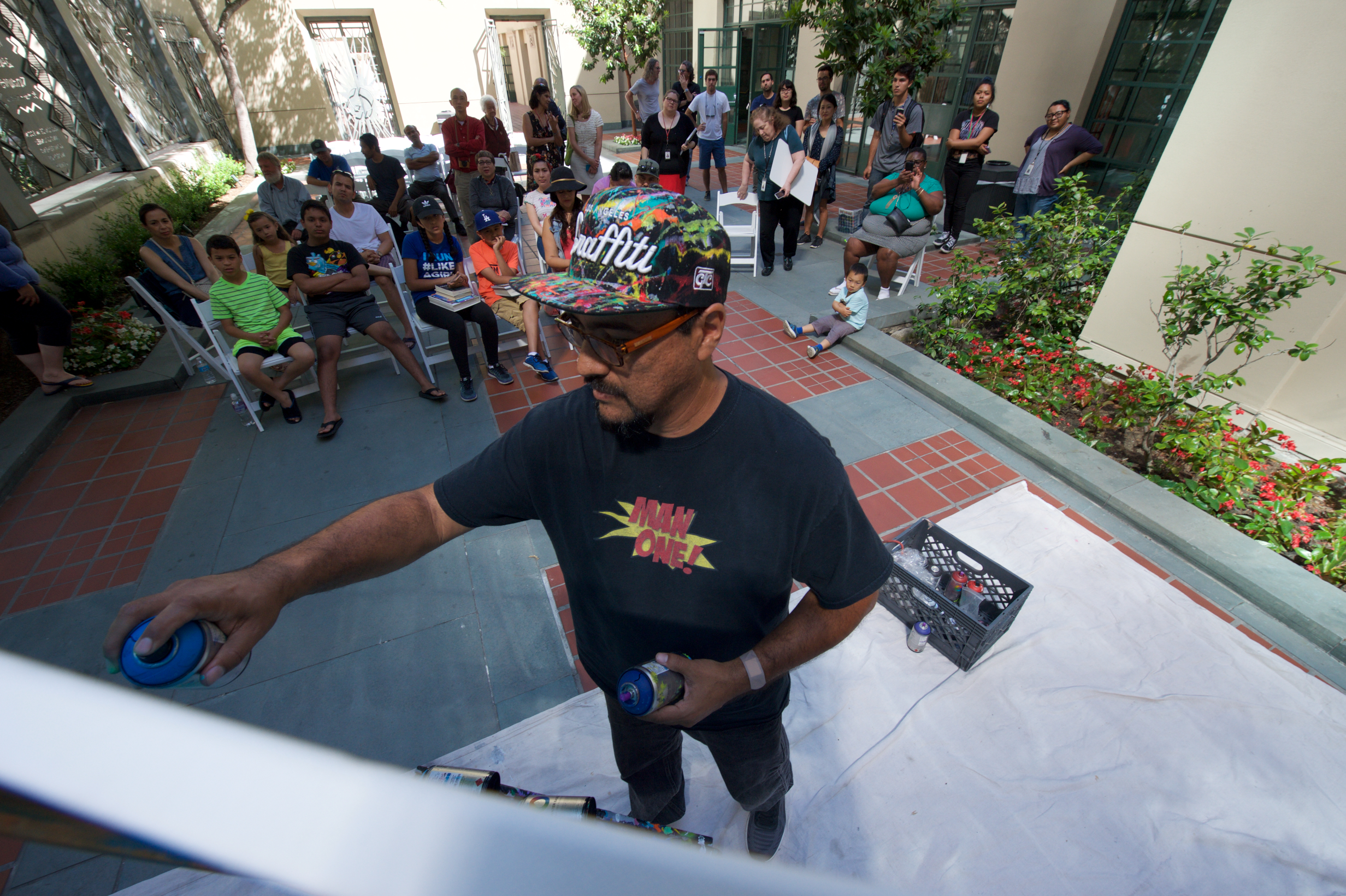 LOS ANGELES — Growing up in the 80s, Alejandro Poli Jr. loved hip-hop, or break dance music as he knew it, and was a fan of the influential hip-hop group Mantronix. He became Man One the moment he dropped the remaining letters from “Mantronix” when he tagged his name for the first time ever. He’d ride the bus to and from school every day, and the day a kid tagging the bus passed the marker to him, the first thing he thought of when he was told to not to write his real name was Mantronix.

“You don’t have that much time to spray paint on the streets so by the time I’d get to the ‘x’ I’d probably get arrested,” he told Latino USA. “So I shrunk it down to ‘Man’ the first three letters M-A-N and that became my street name.” He added One at the end, which in graffiti culture means that he is the first to have the name.

Man One had been into art since he was a little kid. Born in East Los Angeles and raised in the San Gabriel Valley, east of L.A. to a working-class, Mexican immigrant family, he got into hip-hop as a middle schooler and was so enthused by it, he thought he might become a DJ or a break dancer. But that was before he found graffiti. Everything started changing for him after he grabbed that marker from the kid on the bus. He was hooked and soon graduated from tagging buses to taking on the streets where he learned to do large, colorful, graffiti paintings.

Years later, Man One became known for his bold, colorful strokes. He has created murals and large scales pieces in L.A. and has shown his art across the country and worldwide, including Mexico, Japan, and Germany. He’s traveled to Panama and beyond to teach art as well as created live pieces at music events alongside the Wu-Tang Clan, P-funk, Blink 182 and the Black Eyed Peas. He also recently illustrated a book about local L.A. Chef Roy Choi titled Chef Roy Choi And the Street Food Remix.

In 2006, everything came full circle for him when he was commissioned to do a piece for the Los Angeles County Metropolitan Transportation authority (MTA) on construction fences along an east side extension project. To represent the largely Latino population of the community, Man One created four words: family, faith, work, and history and depicted two words in English and Two in Spanish. The experience has been a highlight of his career, he says.

“It proved my whole point that you just need to allow people to flourish in their self-expression and create something positive out of something that others consider negative,” he said.

At one point, Man One’s father disapproved of his son’s art. When he was younger, Man One’s parents worried about their son getting tied up with gangs and thought his graffiti might be a sign that he was getting involved with the “wrong crowd.” At one point, coming to a head-to-head with his father.

“He was very adamant that I stopped doing ‘graff.’ He didn’t like it, but I promised him that I wanted to be an artist, that I didn’t just want to be doing it illegally,” he recalls telling his dad. “This was just a stepping stone for me and that I was going to go to college and get a degree.”

Man One eventually graduated from Loyola Marymount University with an arts degree.

He feels that today, graffiti as an art is more widely accepted now and has less of a stigma as some university campuses include graffiti in their arts curriculum, and as interest has increased in popular culture.

“I would have parents come in [to a gallery I use to have] all the time and say ‘oh, my kid really loves ‘graff’ what can I do to support him?’”

While he believes nurturing self-expression is important in young artists, Man One has his thoughts on going out on the streets.

“When I talk to kids, I always let them know my reality, but the whole point is I don’t want kids out there running around in the middle of the street, in the middle of the night, running around in the streets going wild because I know the dangers that are associated with that. But, you know, I want them to try [to] express themselves and learn better ways to create their art and be self-fulfilled with their expression,” he said.

This year, Man One has become a direct bridge to teaching L.A. youth and anyone else interested in the art form in yet another way. He is now involved with LA Made, a series of programs at various Los Angeles Public Library (LAPL) branches where performers, including artists, musicians and others hold workshops on their craft.

The series provides students with arts education, a subject that low-income, students of color–a portion of the LAPL’s patrons–do not have equal access to.

A December 2017 report by the LA County Arts Collective that surveyed over 2,000 schools across Los Angeles County over 18 months, concluded that although arts education is common and spread out through the county, low-income and students of color continue to face unequal access to arts education.

“The data suggest that students from low-income communities, English Learners and students of color have less access to arts education, and the arts instruction they are offered is of lower quality,“ the report states. “Small and medium districts [in L.A. County] appear to be doing better for their students than larger districts, with the exception of [the L.A. Unified School District].”

“The library provides a lot of services the community doesn’t think about,” said Ziba Zehdar-Gazdecki, Young Adult librarian at L.A.’s Baldwin Hills branch. “We’re an extension of the [Los Angeles Unified School District] education for lifelong learning so all ages can always can come in and we have free classes.”

LAPL is a system that serves the vast city of Los Angeles. Baldwin Hills is a residential neighborhood in South Los Angeles with a predominantly black and Latino population. Although some of the area is comprised of upscale homes, Crenshaw, an area of the neighborhood to the north is widely home to a poverty-stricken, working-class community, and to apartment renters. The area also suffers from crime activity.

Zehdar-Gazdecki told Latino USA that although Baldwin Hills has diverse patrons, many of the patrons at are African-American and Spanish-speakers. When Zehdar-Gazdecki saw that Man One was able to do an arts workshop, she knew she wanted him to present at her branch through LA Made.

“Graffiti to me is very much part of the community, especially when you get the input of the community, when you have a shared wall that the space is seen in the community and you want to represent a message of hope or just art, very colorful or just of anything to make you think,” she said, she lives close to a Man One art piece. “I had heard oh, that’s Man One’s piece and it really added a lot of color to the neighborhood and I really appreciated the wall that was intact.”

Zehdar-Gazdecki was excited about promoting the workshop to the young adults. “I was excited to show the young adults that the library has something for everyone and we are not just what they may think, but we have graffiti art workshops and that that is a path you can study in school.”

A self-described latch-key kid, Man One knows firsthand how important libraries are for some kids and the importance of having arts education in accessible places. He said he would spend hours at the library after school until his parents arrived home from work.

And for Man One, it’s important to give back. As the son of immigrants, he says he’s had to navigate a lot on his own–his educational and professional business journey included. He knows the hardships of being the first to do something, so he says that he wanted to give back some of the knowledge he’s gained back to the generation. Passing down knowledge is also a big part of graffiti culture too.

The next set of workshops will be held in June and July in areas of L.A., within places with large populations of people of color, like Hyde Park and Watts. He will also be participating in a graffiti symposium in September where he and other graffiti artists will speak on the state of graffiti, at the Central Library in Downtown L.A.

“[What] graffiti means, to me, is ultimate self-expression. You can create what you want. It’s very free. It’s very instant” he said, “It’s not permanent, so there’s a lot of forgiveness in that, but it’s also large scale, it’s also life affirming. It’s like you can do a piece of ‘graff’ and then drive by the next day and be like yeah I did that. I was there. I did that. I created it. I made it happen.”

One thought on “Influential L.A. Street Artist, Man One, Is Empowering the Next Generation of Creators”