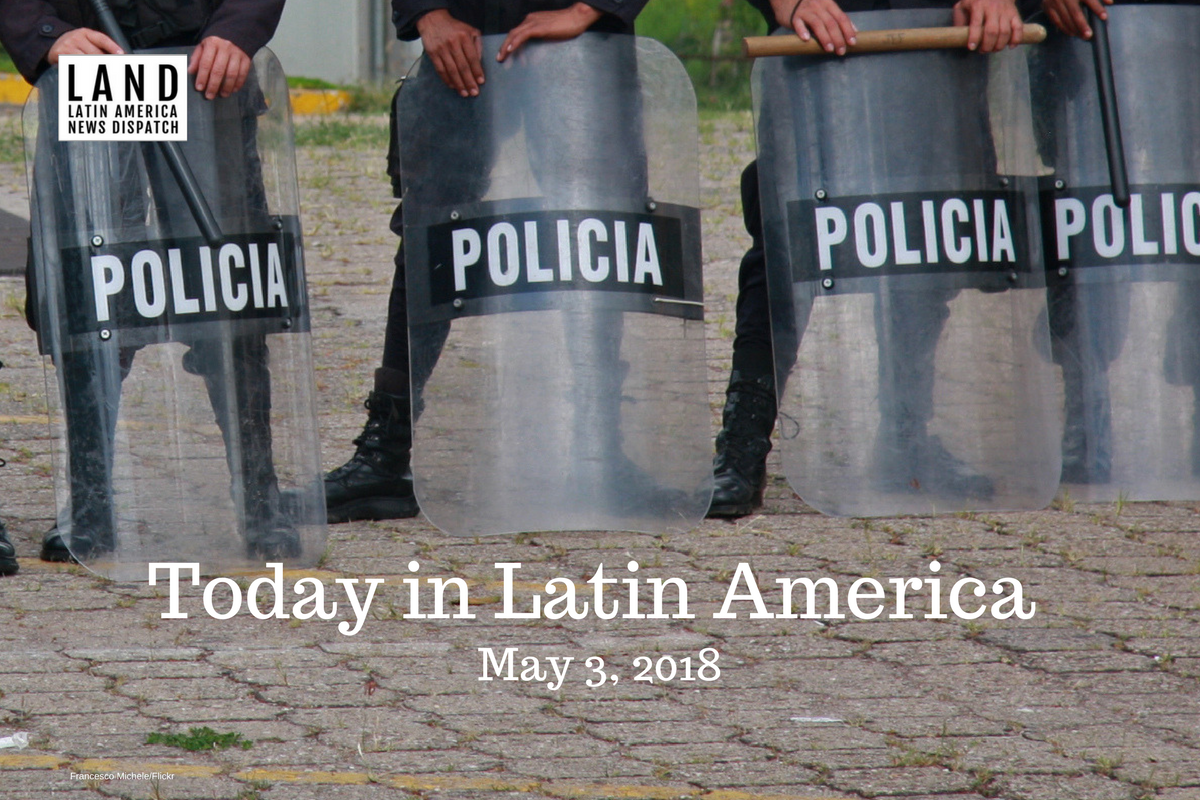 HONDURAS:  About 20,000 people, including ousted president Manuel Zelaya, marched in capital city of Tegucigalpa on May Day. The protests turned violent and anti-riot police used tear gas and water cannons to disperse rock-hurling protesters who were decrying what they see as a fraudulent presidential election late last year which put center right president President Juan Orlando Hernandez in power.

Meanwhile, the Trump administration will decide tomorrow whether to extend the Temporary Protected Status of Hondurans in the U.S. or not.

MEXICO-U.S.: The U.S. Department of Justice announced yesterday it is sending 35 additional assistant attorneys and 18 immigration judges to San Diego’s San Ysidro crossing to help process the backlog of asylum seekers that arrived with the caravan. On Monday, the Justice Department had charged 11 alleged caravan members of illegally crossing the border.

MEXICO: The Mexican Commission for the Defense and Promotion of Human Rights reported yesterday that 11,232 people were forced to flee their homes in 2017 due to drug gang violence. The commission said that since 2006 the number of people displaced by violence is 329,917, though many may have since returned.

JAMAICA: Jamaica extended a state of emergency yesterday in tourist parish of St James until August 2018. The state of emergency began at the start of the year to address the spiraling crime problem which ranks Jamaica as the 6th most murderous country in the world.

PUERTO RICO: Chief of Staff William Villafane turned in his resignation yesterday after the archipelago’s justice secretary announced there is enough evidence of corruption against him and four other government officials for special independent prosecutors to begin a probe. Gov. Ricardo Rosselló accepted the resignation and demanded that the other officials follow suit.

BELIZE: On Monday, the government of Belize set April 10th, 2019, as the date for a referendum to decide whether or not to take a dispute with neighboring Guatemala over almost half its territory to the International Court of Justice. Guatemala voted yes in a similar referendum held two weeks ago.

GUATEMALA: A Judge decided yesterday to grant bail to former president Álvaro Colom, who had been arrested on February on accusations of corruption. Three of his former ministers who are equally accused will also released. The trial against them on the corruption case known as TransUrbano will continue.

VENEZUELA: The International Monetary Fund censured Venezuela yesterday for failing to provide key economic data, such as inflation and gross domestic product. Venezuela, one of IMF’s founding members, could be expelled from the coalition if it doesn’t take action within six months. The institution requires all its member countries to share economic data, but Venezuela hasn’t done so since 2004. Critics say the secrecy is a way to hide the severity of the country’s collapsing economy.

CHILE: Three men who were abused by a notorious Chilean priest urged Pope Francis to turn his apology into action to end the “epidemic” of sex abuse in the Catholic Church, one of them said in a news conference in the Vatican yesterday. The men, who just spent five days with the pope, told reporters that Francis said to them, “I was part of the problem. I caused this, and I apologize to you.” The pope apologized last month for previously defending Bishop Juan Barros, who allegedly hid sex crimes by a priest, and accusing the victims of slander.

CHILE: Prosecutors confirmed yesterday they are investigating an alleged gang rape by a group of men dressed as fans of the University of Chile soccer team near the National Stadium on Sunday, a case that has shocked the country this week. The 28-year-old woman has not been able to give testimony, but she reported the case the same night. Even though the majority of rapes go unreported, the National Prosecutor’s Office said the number of reported sex crimes increased by 9 percent last year, reaching 22,540.

BRAZIL: Brazilian authorities began an investigation yesterday into what caused the fire and collapse of an abandoned, high-rise government building in the city of São Paulo on Tuesday. The collapse left at least one person dead—a man who was seconds away from being rescued. The 24-story building was occupied by more than 300 squatters, but firefighters said only four people were missing.