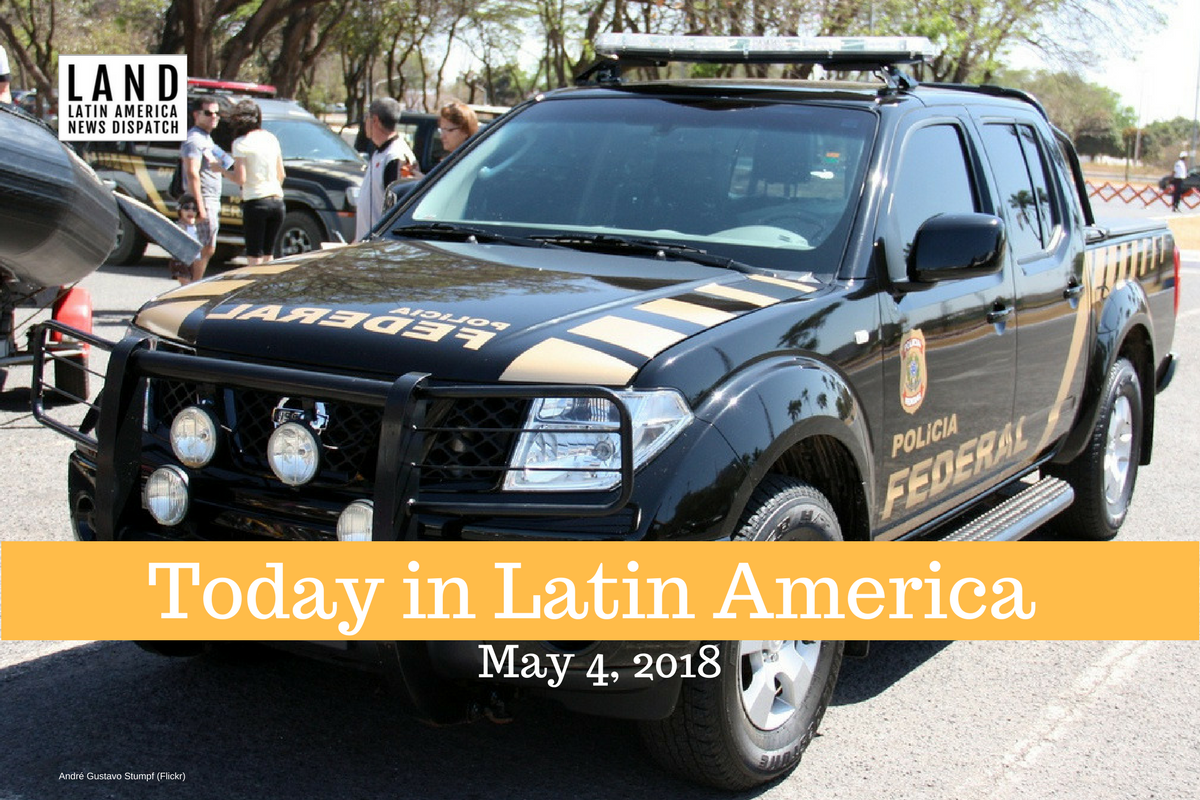 BRAZIL: Dozens of people were arrested in Brazil and Uruguay yesterday in a massive raid targeting an international money-laundering scheme that authorities said moved $1.6 billion through offshore companies in 52 countries.

Brazilian investigators are still working to serve all 53 arrest warrants, most of which are for black-market money changers believed to be linked to high-ranking businessmen and politicians. The ring was uncovered thanks to plea-bargain testimony by two men accused of laundering money for former Rio de Janeiro governor Sérgio Cabral, who is serving a 100-year prison sentence for corruption.

Reuters said Thursday’s raid, which stemmed from Brazil’s far-reaching “Car Wash” corruption probe, is likely one of the largest against graft ever.

MEXICO: Mexico’s ruling Institutional Revolutionary Party, whose presidential candidate is struggling in the polls, changed its party leader this week—just two months away from the general election. Sen. René Juárez Cisneros, a former governor of the state of Guerrero, will take PRI’s leadership, replacing Enrique Ochoa. The change is seen as a move to bring back the PRI of yesteryear and as a shot to increase the popularity of presidential candidate José Antonio Meade, who is in third place in the polls.

MEXICO: Authorities from the state of Puebla raided a local police force station this week and found that 113 of its 185 agents were not real police officers. Puebla’s Secretary of Public Security said some of the fake cops paid bribes to avoid background checks and other paperwork. They will face charges equivalent to impersonating an officer.

JAMAICA: A judge in Jamaica this week ordered radical Muslim cleric Sheikh Abdullah el-Faisal be handed over to U.S. authorities in compliance with an extradition warrant that accuses him of recruiting people to join the Islamic State group, also known as ISIS. El-Faisal, who was arrested last August, has two weeks to challenge the order.

HONDURAS: The Honduran National Anticorruption Council and state prosecutor’s office said this week they will fight an appellate court ruling allowing former First Lady Rosa Elena de Lobo to be tried in a civilian court instead of as a former state official in an anti-corruption court. The woman, married to former President Porfirio Lobo, was arrested in February on embezzlement charges. She’s accused of depositing $600,000 of government funds into her personal bank account just days before her husband finished his term in 2014. Prosecutors say the recent court decision would likely lessen her final charges.

VENEZUELA: Authorities on Wednesday arrested 11 executives of Banesco, Venezuela’s largest private bank, on accusations of manipulating the black-market dollar exchange rate and thus devaluating the country’s currency. The president of Banesco International called the operation, which included the arrest of the local executive president, “disproportionate.” This is the latest action of a probe that has led to 134 arrests and 1,380 frozen bank accounts.

COLOMBIA: Colombia’s Public Ministry denounced yesterday the resurgence of torture and death centers known as “casas de pique,” or chopping houses, in the Pacific port city of Tumaco. The city is an important drug traffic route and has for years been the epicenter of a violent turf war that has highly affected civilians, authorities also reported the sex traffic of girls between 10 and 14 years of age.

ARGENTINA: The Argentine peso lost almost 9 percent of its value yesterday, leading the Central Bank to try to stop the fall by hiking interest rates for the second time in a week. Several of the region’s currencies have devalued in the past few days, but Argentina has felt the worst hit because it’s already vulnerable on account of a large fiscal deficit and a drought that has diminished soy and maize crops, the country’s main source of international trade.

BRAZIL: The Brazilian Supreme Court ruled yesterday to restrict federal lawmakers’ privileged standing, a practice that allowed most corrupt lawmakers to avoid charges for years because of that court’s overwhelming backlog. Until now, only the high court could try the country’s 594 members of Congress—half of whom currently have some kind of charge against them. The new ruling says only the crimes allegedly committed while serving in Congress and that are directly linked to lawmakers’ official roles will be tried by the high court, while other alleged crimes will be ruled by faster moving lower courts.