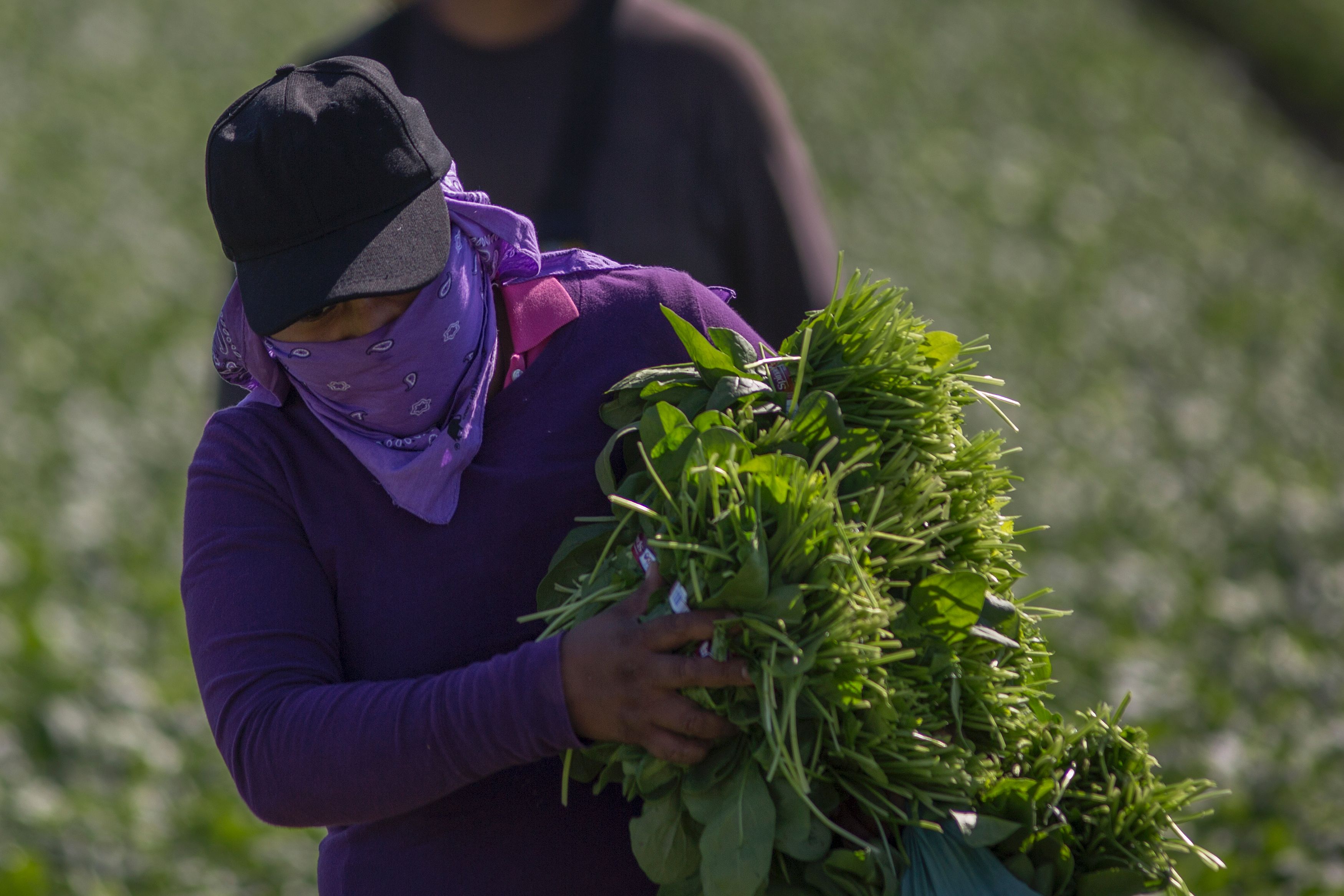 By Anelyse Weiler, University of Toronto, with contributions from Amy Cohen, Okanagan College.

British Columbia, Canada–After Teresa filed a report against her farm employer for sexual assault, he asked her how much money it would take for her to retract her statement. In the spring of 2014, Teresa (not her real name) was attacked by her boss on his farm in British Columbia.

On the day the assault occurred, the boss sent Teresa’s male co-workers to another farm for the day, leaving her and another female farm worker behind. While they were trellising grape vines, the women ran out of twine.

Teresa’s boss told her to come and get more twine inside a shed, where she says he forced his mouth onto hers and began grabbing her inappropriately. She managed to shake off his grip and run back to her co-worker in the vineyard for support.

It was her word against his, and the Crown decided there wasn’t enough evidence to proceed with the charges. In Canada, 46 per cent of women survivors don’t even report sexual assault because they think there is insufficient proof.

Teresa is a single mom from Baja California, Mexico. Since 2012, she has been supporting her parents and two daughters by spending up to eight months each year on Canadian farms through the Seasonal Agricultural Worker Program (SAWP). Teresa was concerned that speaking up about the sexual assault might hurt her and her female co-worker’s future job chances.

She says Mexico’s Secretariat of Labour and Social Welfare verbally warns SAWP workers each season before they leave Mexico: “‘You’re coming to Canada to work, not to cause problems.’ If you complain about something, they kick you out of the program.”

After the assault, Teresa was transferred to a small vegetable farm, where her new employer provided accommodations in a rodent-infested trailer without a functional lock. Teresa’s attacker lived in the adjacent village in British Columbia’s southern Interior. She suffered from recurrent nightmares. “I was afraid. I thought he was going to show up or that he was going to do something to me.”

Our connections with migrant women survivors of sexual assault are based on field research we have conducted since 2013 with migrant farm workers in Canada. We are also volunteer members of grassroots advocacy organizations in British Columbia and Ontario that provide front-line support for farm workers.

Canada’s SAWP is the main agricultural stream of the Temporary Foreign Worker Program. It began in 1966 in response to lobbying from farmers and that year in Ontario, 264 Jamaican workers were hired. Since then, the program has expanded to all Canadian provinces, bringing workers from Mexico and 11 Caribbean countries.

The structure of the SAWP heightens the power imbalance between workers and employers, amplifying women’s vulnerability to sexual assault. Work permits are tied to a specific employer, so getting fired typically means getting deported. Workers in abusive workplaces often have difficulty transferring to a new boss. To be rehired the following season, a farm worker must receive a positive evaluation from their employer.

The SAWP requirements effectively deter worker complaints about labor practices, housing conditions, workplace injuries or violence. The SAWP contains no pathway to citizenship, even for men and women who have worked in Canada for decades.

Workers and critics of the program argue that permanently categorizing migrants as “non-citizens” means they have fewer rights and protections than Canadian workers. The SAWP has been a boon for growers, who have access to a seemingly unending pool of workers whose urgent need for income makes them unlikely to dissent.

Alongside the Temporary Foreign Worker Program, a smaller number of migrants arrive in Canada on tourist visas and work under the table during the harvest. Luz (not her real name), a 30-year-old actor from Sonora, Mexico, was one such tourist.

In the summer of 2015, Luz arrived in British Columbia hoping to work for a few months to save some money to pay off her student loans. While employed on a cherry orchard in the Similkameen Valley, her boss sexually assaulted her.

On the day she was attacked, her boss sent her co-workers to other parts of the farm and then grabbed her while she was walking through an empty storehouse. He forcibly groped her and began kissing her neck. Luz demanded he stop and tried pushing him away, but he was significantly bigger than her.

Her mind was racing, “I’m all alone, no one’s around, I could run, I could yell. But if I yell, who’s going to hear me? A thousand things came into my head, and I didn’t know what to do!” After much deliberation, Luz decided not to go report the groping to the Canadian police as she feared deportation.

While sexual assault, in general, is the most underreported violent crime in Canada, a precarious citizenship status presents an additional barrier to reporting for migrant women (both undocumented and government-authorized).

Both Teresa and Luz said a fear of deportation was a major factor in deciding whether to report their assaults. Both women knew of other workers who had been sent home for complaining to authorities about living conditions, workplace injuries, bullying , nd harassment.

Solidarity with #MeToo Across North America

Despite immense injustices for migrant women, there are slow signs of change. In 2015, the Human Rights Tribunal of Ontario awarded more than $200,000 to two sisters from Mexico hired under the Temporary Foreign Worker Program.

The tribunal found that Presteve Foods, a fish-packing plant in Ontario, had created a “sexually poisoned work environment.” Thirty-nine migrant women from Thailand and Mexico participated as complainants.

The woman who received the highest damages, known as O.P.T., described how the former plant owner forced her to perform sexual acts, threatening deportation if she didn’t comply. In her statement, O.P.T. highlighted how Canada’s migrant worker program continues to create the conditions for abuse: “Under the temporary foreign worker program, the boss has all the power — over your money, house, status, everything …That happened to me eight years ago, and the system is still the same.

‪A silent vigil by Freedom Fasters and supporters from across the country in solidarity with the farmworkers in Mexico’s fields – where @wendys has chosen to buy their tomatoes – who are silenced by impunity, violence and corruption. #TimesUp #TimesUpWendys ‬

Amid the pressure for systemic change from movements like #MeToo and Times Up, farmworker women are pointing to the specific ways race, class, and gender can amplify women’s risk of workplace sexual abuse. In November, The Alianza Nacional de Campesinas, representing more than 700,000 women farm workers in the United States, released a letter in solidarity with Hollywood actors who had survived sexual assault, highlighting the gender inequity that pervades both industries.

The Coalition of Immokalee Workers (CIW), a farmworker-led organization, has been calling on the Wendy’s fast-food chain to sign onto an independent workplace monitoring program that would help prevent sexual violence in fields where the restaurant’s tomatoes are produced.

After a five-day Freedom Fast, CIW farmworker women marched in New York City. Some were accompanied by their daughters.

Solutions for a Better Future

Despite all the pain she has experienced in Canada, Teresa says thinking about her own daughters gives her the strength to keep going.

As part of a cultural shift toward gender equity, we need to revamp Canada’s laws, institutions and policies to better protect all women, including farm workers. The B.C. government has promised to establish a registry that could help prevent migrant workers from being charged illegal recruitment fees, which is a positive starting point. As supported by U.S. research on sexual assault services, provinces could also set up anonymous, toll-free and multilingual crisis hotlines for workers, including those who are undocumented.

To address the multiple barriers faced by migrant farm worker women to health care, researchers have recommended enrolling workers in provincial health-care plans instead of private insurance schemes. Free legal services and English-language classes could also strengthen women’s ability to assert their rights. Workers should have the right to a fair appeal process before deportation.

Ultimately, the Canadian government should eliminate tied work permits and provide migrant workers with full immigration status, two steps that would immediately lessen the disproportionate power of the employer.

Such changes would also go a long way toward ensuring that those who do the vital work of growing the food we eat receive the respect, freedom and dignity they deserve.