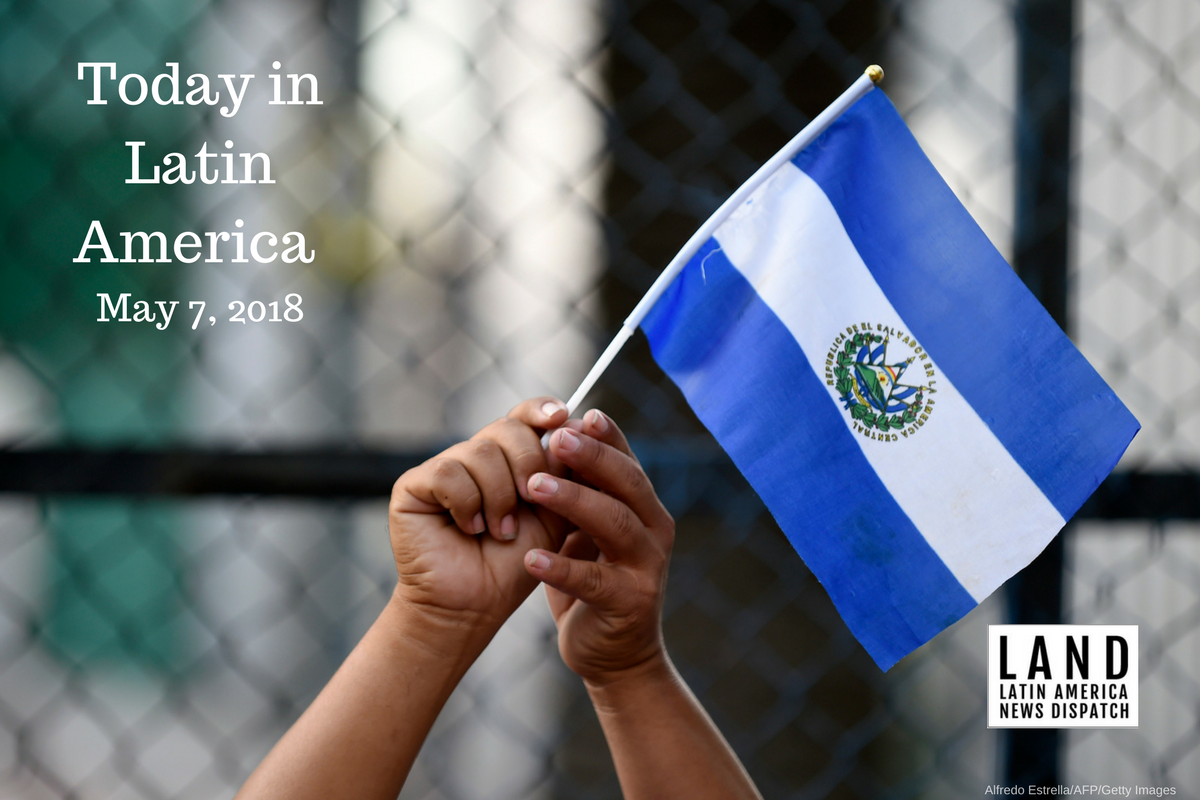 A person taking part in the 'Migrant Viacrucis' caravan, holds a Honduran national flag during a protest outside the US Embassy in Mexico City. April 12, 2018. (Alfredo Estrella/AFP/Getty Images)

HONDURAS-U.S.: The Trump Administration announced on Friday the end of temporary protected status for Hondurans in the United States, thereby requiring an estimated 57,000 people to either leave the country or obtain legal residency in other ways by Jan. 5, 2020. TPS, as the special immigration program is known, has been in place for Honduran citizens since 1999 following the aftermath of Hurricane Mitch. The decision to end the program was expected, considering the Trump administration’s push to limit legal immigration and crack down on illegal immigration. However, it follows last month’s announcement that  DACA, the program that has protected thousands of young immigrants from deportation, will remain instated and that the Trump Administration must resume accepting applications which means some young Hondurans citizens will remain under some kind of protection.

Trump and his supporters argue that the conditions in Honduras have improved since the hurricane and emphasize that the protections were never meant to be permanent. However, critics and immigration advocates argue that the situation in the country is tense, with high levels of violence and continued protests after last November’s contested presidential elections, which at the time led to 23 dead at the hands of security forces and which reignited this past May Day.

PUERTO RICO-U.S: U.S. Representative Rob Bishop announced his support of granting U.S. statehood to Puerto Rico on Friday, joining a push that has been popular since the 2016 U.S. presidential elections and has been in the spotlight in the aftermath of Hurricane Maria. Bishop, however, said that Puerto Rico must first have “a vibrant economy and a stable government” before a statehood transition. On Saturday, Bishop clarified his comments.

MEXICO-U.S: The former U.S. ambassador to Mexico Roberta Jacobson departed Mexico for the U.S. on Saturday, ending her decades-long U.S. State Department career. Jacobson, who has more than 30 years of experience in the region and is one of the few experts on Latin America among active U.S. diplomats, announced her retirement in March amidst increasingly tense relations between the two countries.

MEXICO: Alejandro González Ramos, mayor of the small town of Pacula in the State of Hidalgo, was killed by a lone gunman on Thursday afternoon. More than 60 mayors have been killed in Mexico since 2006, and this number increases if you include ex-mayors and elected representatives. According to the National Association of Mayors, 26 mayors in Mexico have been killed under the government of Enrique Peña Nieto.

CUBA-COLOMBIA: Over the weekend Cuba agreed to host the Colombian peace talks with the ELN guerrilla group. On Saturday, the two sides announced the focus will be the re-establishment of the ceasefire, which expired earlier this year on January. This comes after Ecuador ended its mediating role due to spillover violence on the Colombia border. Cuba hosted the negotiation between the Colombian government and the FARC which led to the signing of the historic ceasefire agreement on Nov. 2016, paving the way for 7,000 fighters to be demobilized.

CUBA: On Friday, Cuban lawmaker Mariela Castro, Raúl Castro’s daughter, said she will push for same-sex marriage to be included in Cuba’s constitutional reform expected to take place in July. A prominent gay rights activist and a national representative of the National Center for Sex Education, Castro stated that although progress towards LGBT rights in the assembly has been slow due to Cuba’s “historically patriarchal and homophobic society”, she believes that the island’s new president Miguel Díaz-Canel “has proven sensitive” towards the issue.

EL SALVADOR: Dozens of homes were damaged as a series of earthquakes hit El Salvador yesterday. Although there are no immediate reports of serious injuries or deaths, the country’s civil defense agency reported online that around 70 homes were damaged. According to the U.S. Geological Survey, at least nine quakes of magnitude 4.3 or greater hit the Salvadoran coastline, including one of magnitude 5.6. off the coast of the department of Intipuca.

EL SALVADOR: On Friday, a new initiative to fight gender-based violence was presented in San Salvador. Actions include a campaign against sexual harassment and an emphasis on preventative measures. Official figures state that 318 femicides were registered in 2016, 468 in 2017 and 154 thus far in 2018.

COLOMBIA: FARC leader Rodrigo Londoño, known as Timochenko, asked Yolanda Pinto, widow of former governor of Antioquia Guillermo Gaviria, for forgiveness for her late husband’s death at the hands of guerrilla forces in 2003. Pinto, who is director of the Victim’s Unit in Colombia, accepted Londoño’s apology, asking “What would have happened in Colombia if the 8.6 million victims would’ve decided to take revenge?”

ARGENTINA: After a severe devaluation of the Argentine peso last week, the government’s decision to increase the reference interest rate to 40 percent led to a mild recovery on Friday, when the peso was selling at 22.20 per dollar from a record high of 23.30 on Thursday. Treasury Minister Nicolás Dujovne announced the decision to cut the fiscal debt target because of the devaluation but said the country is still on track to achieve a fiscal equilibrium, adding that there will not be a decrease in inflation this month.