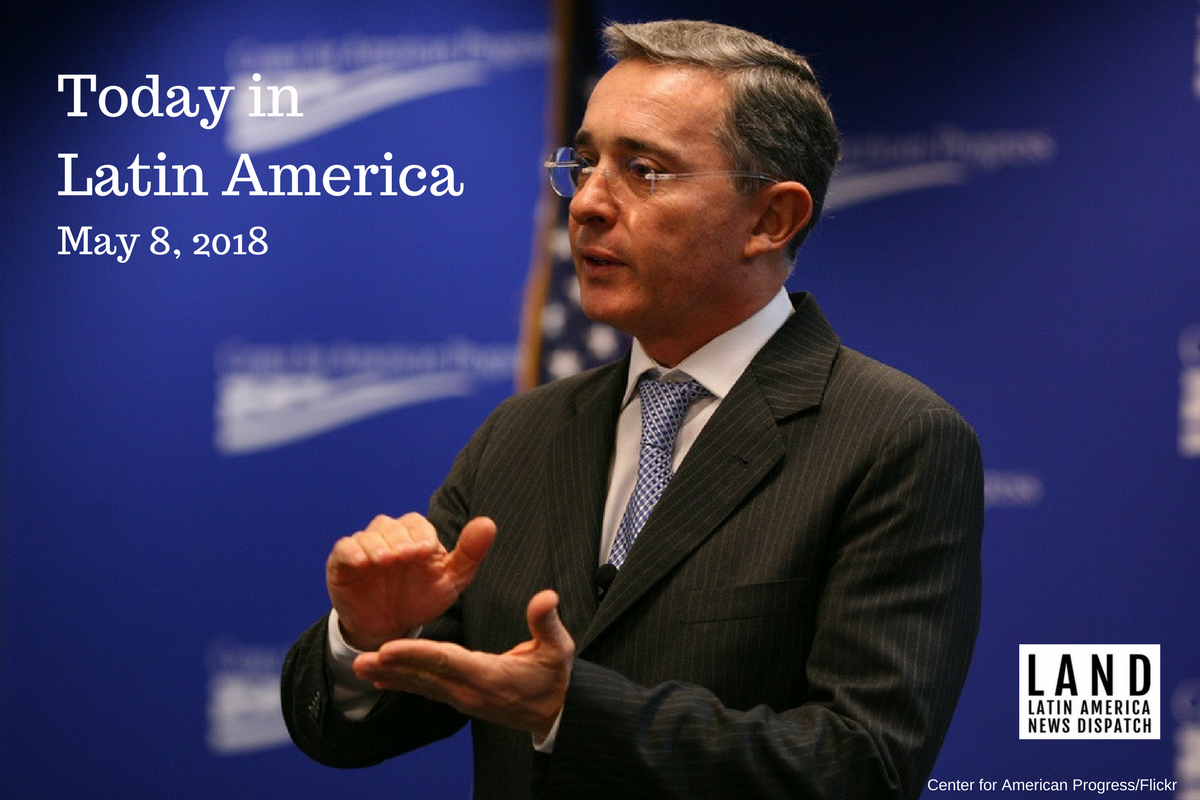 COLOMBIA: Right-wing opposition senator and former Colombian president Álvaro Uribe Vélez claimed yesterday that government officials warned him of a plot against his life last week. Former President Andrés Pastrana, who has allied with Uribe against the FARC peace deal, had made a similar claim on Twitter this past Saturday, asking authorities to investigate whether Cuba and Venezuela were involved. Uribe’s announcement came just days after a jailed Cuban national told W Radio he was contracted by the “extreme Colombian right” and hardliners in the Miami-Cuban exile community to coordinate the assassination of former Bogotá Mayor Gustavo Petro, a demobilized Marxist guerrilla who is running for president against Iván Duque, Uribe and Pastrana’s preferred candidate. Duque, the current front-runner, has also been targeted  for assassination, according to authorities.

MEXICO: Two media outlets fired one of Mexico’s prominent journalists, Ricardo Alemán, after he flippantly suggested in a tweet that leftists (called “chairos” in demeaning terms) should assassinate front-runner presidential candidate Andrés Manuel López Obrador, creating strong backlash on social media and the trending hashtag #NoAlPeriodismoSicario, meaning “no to hitman journalism,” from Mexicans. On May 5, Alemán taunted: “John Lennon was killed by a fan. Versace was killed by a fan. Selena was killed by a fan. Now’s the time chairos.” The newspaper that publishes his column, Milenio, stood by him, but Televisa and Canal Once cut ties with him.

UNITED STATES: U.S. Vice President Mike Pence directed the Organization of American States to impose more sanctions on Venezuela in the name of democracy and freedom. Pence asked the OAS to curtail the country’s financial infrastructure and enforce visa restrictions. He also urged Venezuelan President, Nicolás Maduro, to cancel the country’s “fraudulent” upcoming presidential election and to accept international aid. Venezuela’s North American deputy foreign relations minister, Samuel Moncada, called Pence’s statements a “monstrosity” and said that the May 20 elections will not be closed by any means.

CUBA: Yesterday, the first U.S.-based commercial cruise ship set sail to Cuba from Port Canaveral in Florida. Operated by Norwegian Cruise Lines, the ship will engage in a four-night trip, stopping in Key West today and arriving in Havana tomorrow. The route will operate until September, resuming in April 2019. This is yet another step towards economic and cultural bilateralism, after the normalization of diplomatic rrelationsbetween the two countries known as the “Cuban thaw” during the Obama administration.

CUBA: Throughout this week, Havana will host the 37th Session of the Economic Commission for Latin America and the Caribbean, known as ECLAC or CEPAL in Spanish, the United Nations regional commission’s most important biennial meeting. Between May 7-11, the session will be attended by more than 25 ministers from more than 20 countries of the region, which coincides with the organization’s 70 anniversary. The opening ceremony will take place today and will be headed by Alicia Bárcena, Executive Secretary of ECLAC, Francisco Guzmán, Chief of Staff of the President of Mexico, and António Guterres, Secretary-General of the U.N.

PUERTO RICO: On Monday, governor Ricardo Rosselló outlined how the archipielago’s administration plans to implement the $1.5 billion in federal funds in hurricane recovery efforts, awarded through the Community Development Block Grant program. Puerto Rico’s governor plans to allocate $36 million in developing renewable energy projects for homes, whereas $12.5 million will be invested in building homeless shelters, and $15 million in tourism promotion. All these initiatives serve the groundwork for the economic recovery after Hurricanes Irma and Maria, which caused an estimated $100 billion in damage.

COSTA RICA: Today, president-elect Carlos Alvarado will be inaugurated in San José. The ceremony will take place in the Plaza de la Democracia, an open-air public space in downtown San José. More than 80 international delegations are expected to attend the event. At 38, Alvarado will become the youngest president in Costa Rica’s history.

SURINAME-GUYANA: Bilateral security talks continued yesterday, after Guyanese pirates attacked a mostly Guyanese fishing crew in Surinamese waters last month, leaving 15 dead and missing. At least 13 people have reportedly been detained in relation to the brutal attack, which may have a been retaliation for a March 30 drive-by-shooting in Guayana. One suspect has reportedly confessed to killing five of the fisherman, though only three have been confirmed dead thus far.

PARAGUAY: President Horacio Cartes will move Paraguay’s embassy in Israel from Tel Aviv to Jerusalem by the end of this month, the Israeli Foreign Ministry announced yesterday. A government spokesperson said the move could take place May 21 or 22, just days after the United States and Guatemala are scheduled to inaugurate their new embassies in the contested international city.

CHILE: The government is facing renewed criticism this week for its use of a dictatorship-era anti-terrorism law to criminalize Indigenous peoples, after three Mapuches were convicted Saturday of a 2013 arson homicide. Amnesty International said the trial, “which contravened international standards,” was an example of “the discriminatory manner in which justice is applied against leaders of Indigenous peoples.” The director of the government-backed National Institute for Human Rights called the case “worrisome.”