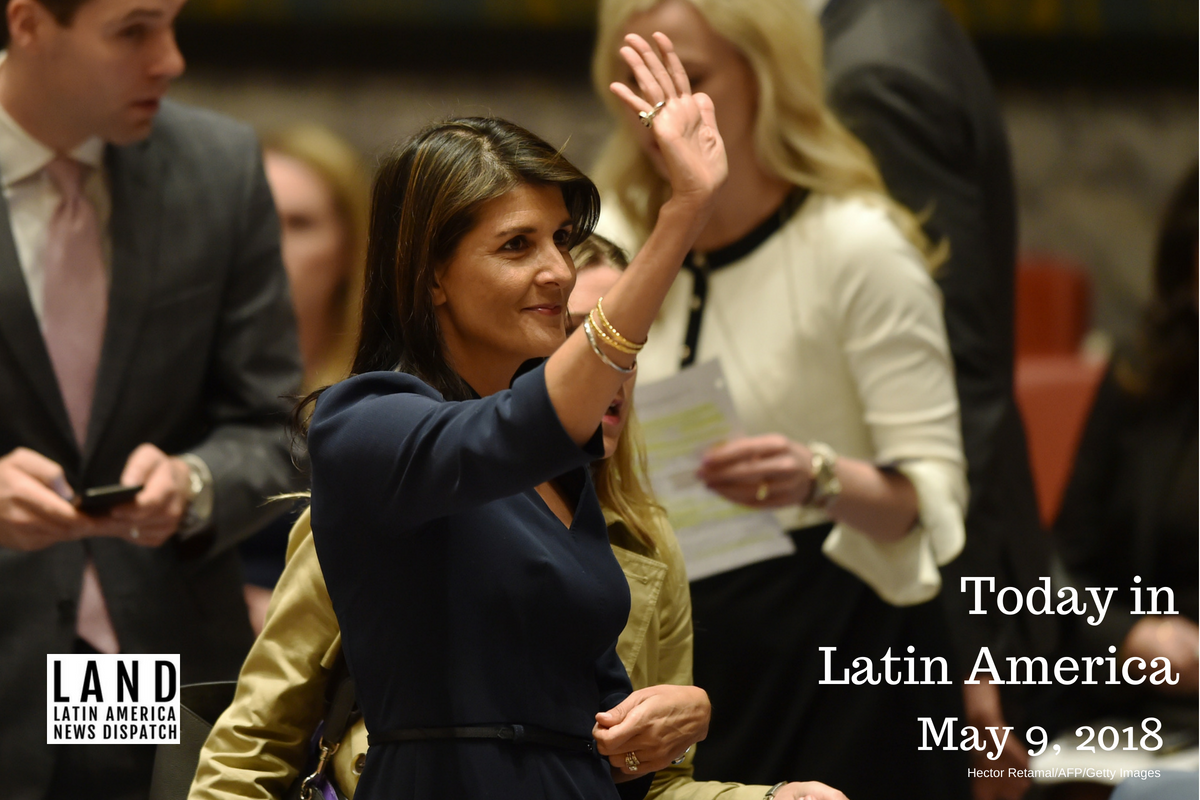 U.S.-VENEZUELA: A day after Vice President Mike Pence called on the Organization of American States to suspend Venezuela, United Nations Ambassador Nikki Haley said President Nicolás Maduro should step down, “for the safety and security of all the peoples of Latin America.” Speaking at the annual Washington Conference on the Americas yesterday, Haley called Venezuela a “narco-state” and said that the “time for talking … is long passed.” Her comments were echoed by Deputy Secretary of State John Sullivan and Sen. Marco Rubio, who has wielded substantial influence on hemispheric issues under the Trump presidency. All three described Venezuela’s upcoming presidential elections as a sham and asked other governments in the region to follow the U.S. lead on sanctions, the latest round of which was announced Monday.

The Trump administration has taken an aggressive position on Venezuela ever since entering the White House. But with former CIA Director Mike Pompeo—who has warned that Cuba could influence U.S. elections—heading the State Department and noted Venezuela hawk John Bolton in charge of the National Security Council, this week’s activity may be signs of a newly emboldened hardline policy. Haley and other speakers alluded to a “Cuban-Venezuelan-Nicaraguan model of socialism, dictatorship, corruption, and gross human rights violations.” Last year, Trump moved to reverse the Obama administration’s diplomatic rapprochement with Cuba. More recently, the United States pulled diplomatic personnel from Nicaragua, in response to a deadly government crackdown on protests.

MEXICO: Mexican electoral authorities announced yesterday that they will investigate complaints against 17 candidates registered as transgender women in local races in the state of Oaxaca. Complaints from a pre-hispanic Oaxacan transgender community known as muxes, pronounced “MOO-shays,” say that the candidates are men dishonestly passing off as transgender women in order to fulfill the state’s electoral gender parity requirement.

U.S.-PUERTO RICO: Senators interrogated federal and Puerto Rican officials yesterday on the Hurricane Maria recovery effort, asking why the U.S. territory still lacks full power eight months after the storm, with a new hurricane season looming. The hearing, held by the Committee on Energy & Natural Resources, came a day after Puerto Rico’s public power company announced that it will use the U.S. national standard to rebuild the territory’s power grid.

MEXICO: For the second time in the past week, Mexican business chambers sponsored a newspaper ad indirectly attacking former Mexico City Mayor Andrés Manuel López Obrador, the current front-runner heading into July presidential elections. Though the ad did not address López Obrador by name, it criticized those who incite “resentment.” After saying that some businessman don’t support him because “they don’t want to stop stealing,” López Obrador, a leftist, clarified that he opposes corruption and not business. A similar ad campaign in 2006 is believed to have helped cost him the presidency.

JAMAICA: Stanley Roy Archer, a migrant from the Windrush generation, received the Prime Minister’s Medal of Appreciation yesterday in recognition of decades of organizing in rural Jamaica. Archer left for the United Kingdom in 1954 but returned after Hurricane Gilbert struck the Caribbean in 1988, devastating much of the Jamaican countryside. “I knew I had to do something for Jamaica, land I love,” explained Archer, whose work securing piped water for Jeffrey Town and building out farmers associations in the region has been celebrated by the United Nations.

GUATEMALA: Anti-corruption advocates are speaking out this week, after U.S. Sen. Marco Rubio announced he would place a hold on $6 million in funding to the U.N.-sponsored International Commission on Impunity in Guatemala, known as CICIG in Spanish. “There is neither time nor space for pessimism, uncertainty, discouragement or fear,” tweeted commission President Iván Velásquez. The hold comes days after President Jimmy Morales named a new attorney general widely perceived to favor elite sectors targeted in wide-ranging graft investigations. Rubio justified his decision with an unproven theory that CICIG collaborated with Russia to prosecute the Bitkovs, a wealthy family that fled Russia in 2009 and was discovered living in Guatemala with false papers.

COSTA RICA: In his first speech as president of Costa Rica, Carlos Alvarado said yesterday that his incoming government would focus on reducing poverty and bettering employment, education and health. After a charged election campaign that often centered around issues of same-sex marriage, the 38-year-old Alvarado also promised a plural and inclusive administration. “Under the clear blue of our skies, there is room for all of us,” he said.

VENEZUELA: In a press conference yesterday, members of a major opposition faction called on presidential candidate Henri Falcón to withdraw from May 20 elections, accusing the former Lara governor of undermining the political coalition against President Nicolás Maduro. Several opposition leaders have recently come out in support of Falcón’s candidacy. But hardline factions within MUD, as the opposition coalition is called in Spanish, have instead advocated a total boycott of the contest. At yesterday’s press conference, José Manuel Olivares, spokesman for the Broad Front for a Free Venezuela, said Falcón was a plant obeying the orders of Maduro, “his boss.”

BRAZIL: Joaquim Barbosa, Brazil’s first black Supreme Court justice, announced on Twitter yesterday that, after “much reflection,” he had reached the “strictly personal decision” not to run for president. Especially since the jailing of former President Luiz Inácio Lula da Silva last month, Barbosa had been floated as a potentially unifying candidate, capable of winning over both left and right through his support of social programs and record on corruption.

ARGENTINA: President Mauricio Macri announced yesterday that the government is pursuing a financial aid deal from the IMF in response to a major devaluation of the peso. Macri is looking for an unspecified amount through a flexible credit line deal in order to address increasing interest rates and increased oil prices. Many Argentines are wary of the IMF involvement in the country’s economy after the crisis of 2001 where Argentina was forced to default on a 100 billion debt and the peso lost almost 70 percent of its value.