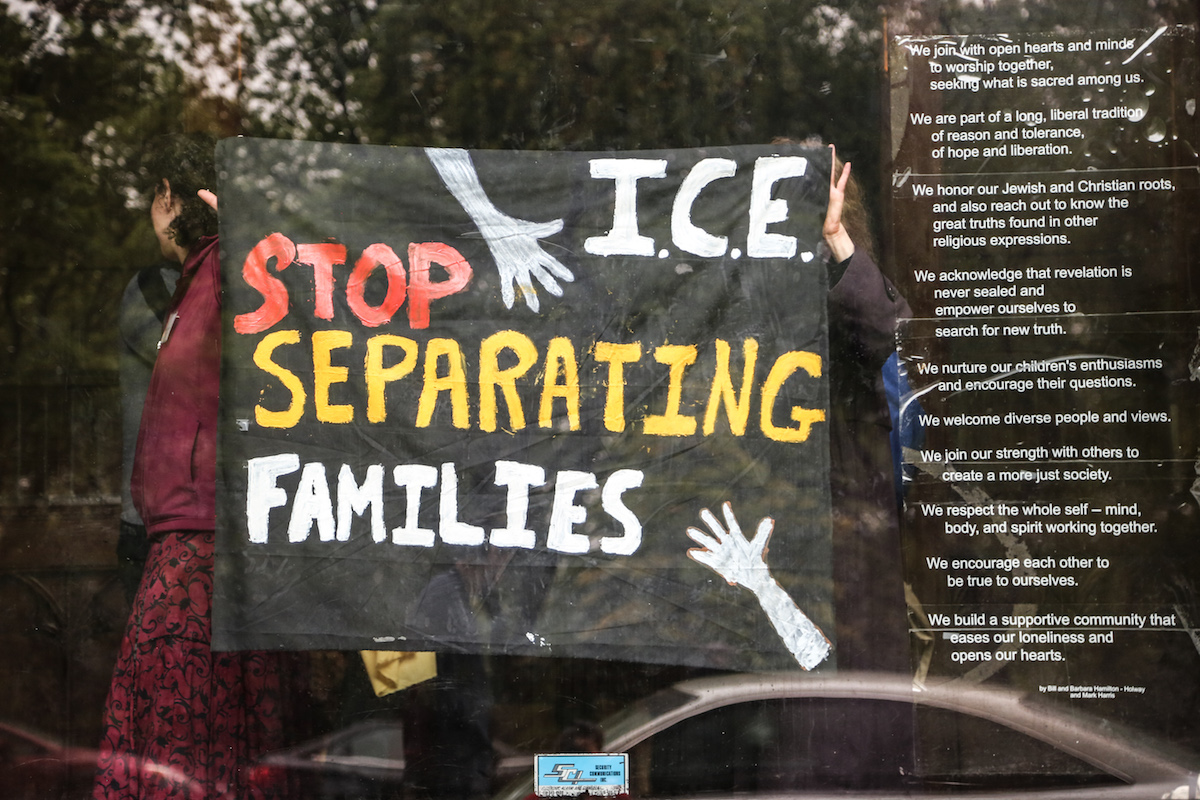 A banner outside the Fourth Universalist Society in Manhattan’s on May 14, 2018 (Photo by Maira Nolasco-Carranza)

From the church pulpit of the Fourth Universalist Society on Manhattan’s Upper West Side, Aura Hernández, an undocumented Guatemalan mother of two who has taken sanctuary in the church for the past eight weeks, nervously addressed a crowd of supporters on Mother’s Day, May 14, in anticipation of a march to be held later that afternoon.

“I never thought I would be in this situation,” she told them, adding that she took sanctuary “because of the new policies of the new administration, and the injustices of ICE [Immigration and Customs Enforcement].” That includes, she pointed out, Attorney General Jeff Sessions’ recent announcement to separate families who enter the United States without authorization.

Hernández was also critical of Thomas Decker, head of the New York regional ICE field office, “for not showing even a tiny bit of humanity… above all, to the children suffering through this situation.” She then called for New Yorkers to join her struggle and to send letters to the office of the regional directory so that ICE officials understand “that they are separating families and that what they are doing is unjust.”

Reverend Juan Carlos Ruiz, an organizer with the New Sanctuary Coalition, was among the speakers at the event. Like Hernández, he too reiterated the harm caused by immigration enforcement and denounced the policy, telling Latino USA, “Who are we when our government is destroying families, who are we when your government is separating mothers from children?”

“We know that Aura is not the only mother. We have thousands and thousands of mothers that are in the same situation, so we want to make visible not only her suffering but the many countless mothers, who feel the threat looming over them,” Ruiz said.

Hernández also expressed concern over the violence of her native Guatemala, which she left 13 years ago to come to the United States. In an interview with Latino USA, she said that two of her brothers had been killed in Guatemala, one for refusing to join a gang, and the other during a robbery at his place of work. There is also the threat of extortion from gangs, she added.

Another concern was the education of her children, according to Hernández. Up until this past Friday, teachers in Guatemala have led a partial strike that lasted about a month. This is often the case, Hernández noted, with teachers striking to either receive their pay or demand an increase to their paltry salaries. Ultimately, she expressed her solidarity with the teachers, but the opportunity for a stable education for her two children was among her utmost priorities.

Her children have been her only source of motivation and strength in her decision to seek sanctuary.

“If I didn’t have children, I would go to my country, but I do this for my children,” Hernández said. “They shouldn’t have to go suffer in a country that’s not theirs.”

Eventually, marchers went around the block of the church eight times in the rain to symbolize each week that Hernández has been living in sanctuary. Led by a group of children in front, the demonstrators shouted chants, like “keep families together” and “ningún ser humano es ilegal” (“no human bien is illegal”). At one point, Hernández also stepped outside briefly to hold a banner for passersby.

Last year, Latino USA reported about the U.S. church sanctuary movement from the 1980s to the present day.