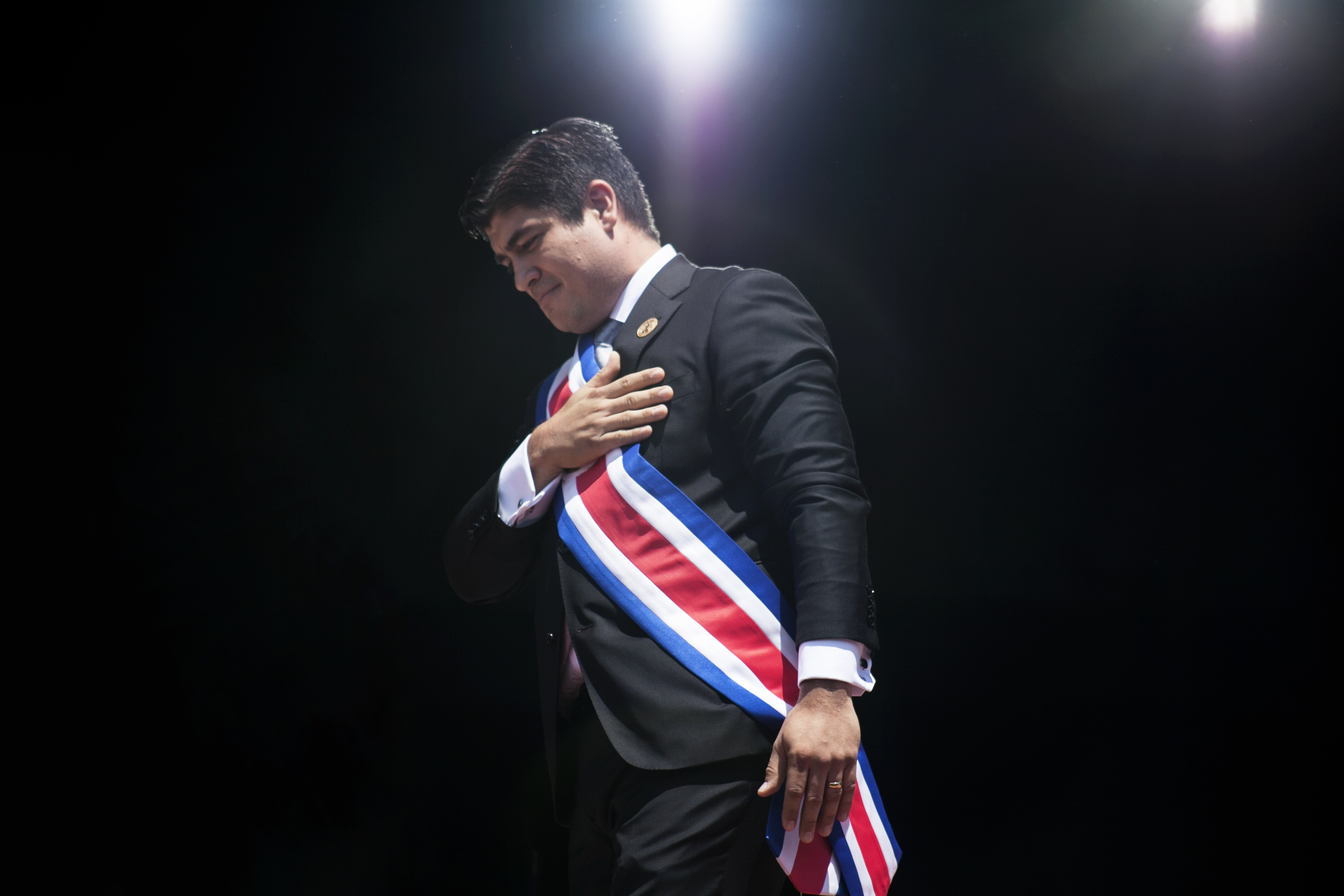 Carlos Alvarado Quesada bows before the crowd after being sworn in as the new President. Photo: Mariela Vargas Arce.

SAN JOSÉ – Costa Rica was full of first-timers in the Traspaso de Poderes (Presidential Investiture), which took place on May 8. It was a hot day at the capital’s Plaza de la Democracia, where the sun shone over the past cabinet led by former President Luis Guillermo Solís of the Citizens Action Party (PAC), as he bid farewell to his office and the Costa Rican people. Then, 38-year-old Carlos Alvarado Quesada, also from the PAC, became the second youngest president in the history of the Central American country.

Just two months earlier, the polls were saying that the new president would be Fabricio Alvarado, a Christian pastor and singer, whose pro-life positions and other messages were labeled by critics as misogynistic, homophobic, transphobic and xenophobic.

Running against him were Alvarado Quesada and Epsy Campbell Barr –a feminist Afrolatina— both openly supportive of gender equality, equal marriage, carbon neutrality, tax and education reforms, and human rights in general. They finished the first round in second place, and won the second round by a million votes, defying the odds. Their victory was celebrated by thousands of people who took to the streets, full of joy and hope.

Alvarado Quesada’s administration seems to already be full of new possibilities. Particularly that of inclusion: exactly one week before he took the presidency, congressional deputies elected their Board of Directors, and for the first time in 18 years, a woman became president of the country’s legislative body. Her name is Carolina Hidalgo Herrera. She is 32 years old.

Hidalgo Herrera presided over the event, accompanied by the new President, Vice Presidents, the Secretary of State, and all his cabinet. The new congressional leader rode a bicycle to the ceremony, pedaling next to a bus propelled by hydrogen and created by the Costa Rican scientific and former NASA astronaut, Franklin Chang. It was one of the actions this new government took to keep the event carbon neutral.

When Hidalgo Herrera and the rest of the congressional deputies took to the stage, women outnumbered men. Five women occupy six of the deputies positions, all from different parties.

The ceremonial session of Congress happened in front of more than 2,500 people—Costa Ricans from all over the country, of different religions, backgrounds, races, ages and genders, including LGBTQ+ people, like the transgender boy Sean Miranda, who was one of four high school students to bring the national flag to the stage. And, for the first time, members of tribes who live in the countryside were also present. They were all invited guests. It was a national celebration.

Hidalgo Herrera’s main responsibility was to swear in the new president. While the country and the world watched, Luis Guillermo Solís, the first president who broke the bi-party system that had been in place since 1948, gave the presidential slash to Alvarado Quesada, from his own party. Some attendees cried and were visibly moved.

Epsy Campbell Barr, the first Afro-Latina woman to become vice president in the region, was also sworn in.

After this part of the ceremony, the new leaders moved to the National Museum, formerly an army command center that was later transformed into a civil building, when the country’s army was dissolved in 1949. From there, Alvarado Quesada and Campbell Barr presented and swore in the new cabinet of the self-proclaimed government of “Unidad Nacional” (National Unity), with people of four different parties, and the biggest number of women in history.

In his speech, Alvarado Quesada promised a democracy that will work for the human rights of “all people, and all families. Because, in this nation, we all have a place.” In her speech, Hidalgo Herrera talked a new era in which women, black communities, elders, disabled people and LGBTQ+ people will be the protagonists.