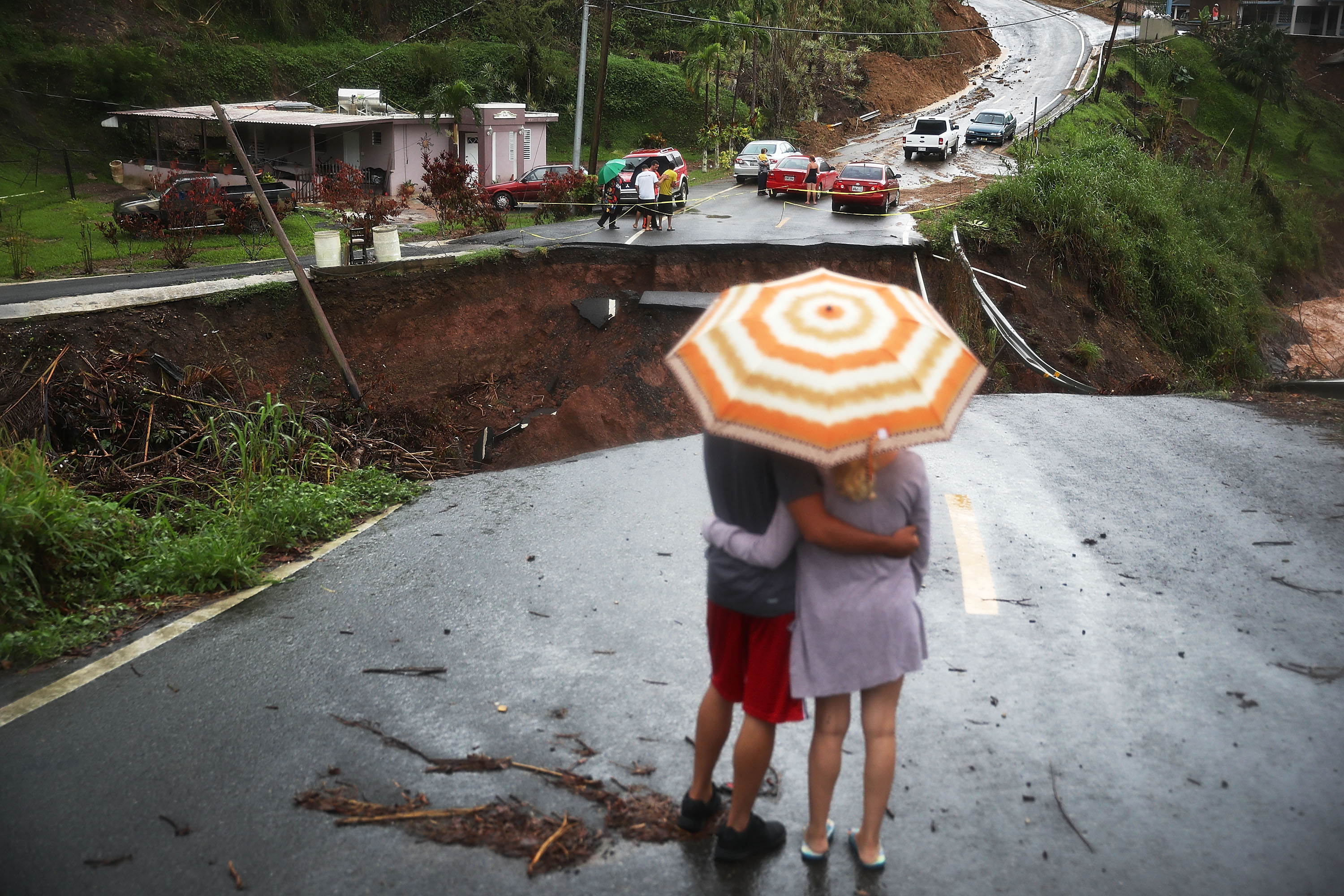 People look on at a section of a road that collapsed and eroded days after Hurricane María swept through the island on October 7, 2017 in Barranquitas, Puerto Rico. (Photo by Joe Raedle/Getty Images)

During a Tuesday phone call hosted by the Power 4 Puerto Rico coalition, members of Congress and advocates who have been outspoken about the impact of Hurricane María in Puerto Rico expressed their concern about the upcoming hurricane season. It has been close to eight months since María devastated the island, and questions are mounting about the government’s preparedness to handle the 2018 hurricane season, which will begin on June 1.

“This crisis can best be described in numbers. This was $90 billion in devastation caused by Hurricane María, yet Congress and President Trump only allocated $15 billion,” Congressman Darren Soto (D-FL) said on the call. “We’re seeing the results of that playing out in thousands of stories everyday of the underfunded recovery. As we enter another storm season, we’re only seeing $1 billion invested in rebuilding the electric grid. It is no surprise that we’re seeing rolling blackouts, rural areas that still don’t have access to power, where traffic lights as recently as three weeks ago were out in urban areas. This is one of the major effects of Congress under-funding the disaster relief effort.”

Power 4 Puerto Rico is described as a coalition seeking to push Congress to “put Puerto Rico’s economy on the road to future growth and prosperity.” The Tuesday call was led by former New York City Council Speaker Melissa Mark-Viverito, now the coalition’s campaign director and a senior advisor to the Latino Victory Project. Rep. Adriano Espaillat (D-NY), Frankie Miranda, senior vice president for the Hispanic Federation, and Ana María Archila, co-executive director for the Center for Popular Democracy, were also on the call.

Mark-Viverito said that based on scientific research, the intensity of hurricanes is expected to increase, and Federal Emergency Management Agency (FEMA) as well as the local government in Puerto Rico need to be prepared.

“We know that the strength and intensity of each hurricane season is only going to increase,” she said. “Puerto Rico is not ready to endure another Category 5 hurricane. We want to ensure Puerto Rico increases its resilience, builds better infrastructure.”

Espaillat cited the challenges faced by Puerto Ricans in receiving funding for housing. He said that he and his colleagues have worked to get funding allocated to locals only to see those applications often denied.

“Currently, FEMA has been denying many of the applications submitted by Puerto Ricans for funding to restore their housing, citing a lack of adequate proof of ownership,” the New York Democrat said.

Soto named some actions that states can take to assist Puerto Ricans, “One of the first things is helping out evacuees who have arrived” he said. “However, that’s going to end and come quicker than we think, which is why I’ve called on both Congress and non-profits to work on rental deposit assistance.” Over the past few months, a record number of Puerto Ricans have left the island, creating a crisis in states like Florida and New York, where they were recently threatened with losing shelter.

Miranda called on the federal government to take action.

“While we recognize that no one is fully prepared for a natural disaster of this magnitude, we must hold the federal government accountable for their response to the communities they are responsible to serve. What we know from the groups working on the ground is that the federal response was uncoordinated, ineffective and, in many cases, even criminal,” said Miranda, while naming the work that locals have been doing independently or through non-profit organizations.

Archila stated that the response from the federal government has been inadequate, with 200,000 people displaced.

“Hurricane season is about to start again, and with the climate trends as they are, this is not going to be a one-time situation,” she said, “We need the federal government to understand the magnitude and reality of the situation in Puerto Rico.”

A recording of the entire media call be heard below: