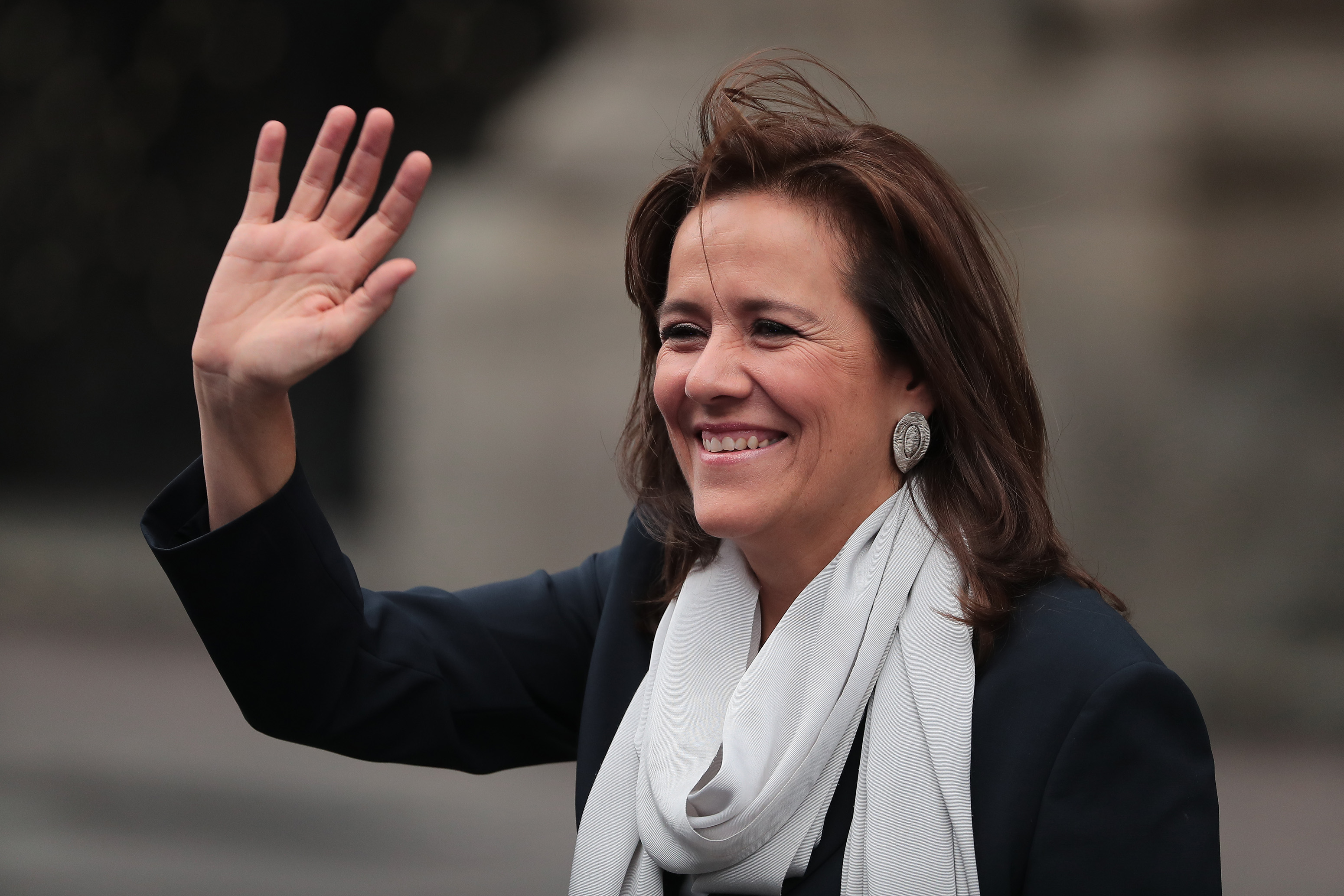 Margarita Zavala, independent presidential candidate waves as she arrives to the first Presidential Debate. April 22, 2018. Mexico City, Mexico. On May 16, Zavala dropped out of the race. (Photo by Hector Vivas/Getty Images)

MEXICO CITY– On July 1, Mexicans will be able to vote for an independent candidate for the first time in the country’s recent history, if they choose to do so. In prior races, presidential candidates had to be aligned with a political party, but this year, candidates with no party affiliation could get their names on the ballot as long as they met all of the requirements, side by side those backed by large political parties.

However, despite this historic new feature, the aspiring independent presidential candidates have not been able to become serious competitors, nor capitalize on the general disenchantment with political parties in the country who are dominating this election cycle.

Highlighting the struggles of independent runners, Zavala, the highest polling independent candidate, dropped out of the race on May 16. She stated that the reason for withdrawal was that she recognized she was not going to be successful, due to the massive amount of resources that the parties are given compared to the meager amount given to independents, and to the country’s single round election system.

“These conditions of inequity and lack of second round were imposed” she said, “and I recognize that they make a successful independent candidacy nonviable.”

The front-runner of the elections is left-wing Andrés Manuel López Obrador, running with the National Regeneration Movement. Polls continue to place him as the top contender not only for the Mexican population, but also for Mexicans who are eligible to vote in the U.S. A recent Bloomberg poll tracker showed López Obrador, who is commonly known as AMLO, with a double digit lead over his opponents, Ricardo Anaya, representing the National Action Party-led coalition, known as the PAN; and José Antonio Meade for the Institutional Revolutionary Party-led coalition.

Early on, as the electoral season was shaping up, Zavala, the wife of former president Felipe Calderón, seemed to have potential when she was a member of the center-right National Action party (PAN). In a 2017 poll conducted by the newspaper El Universal, she was shown to be one of the most known politicians with presidential aspirations in the country. The same poll also showed that 44.6 percent of PAN members preferred her as the presidential candidate for the party, compared to 29.1 percent who said they wanted Ricardo Anaya, then-president of the PAN and now the party’s presidential candidate.

After it became evident that she would not be able to be the party’s candidate, Zavala left the PAN in October of 2017 and announced her intentions to run as an independent, citing that there was no democratic and transparent process for choosing the party’s presidential candidate under the leadership of Anaya.

While Zavala chose to become an independent candidate as a last resort, El Bronco is the highest ranking independent politician in Mexico. Formerly of the Institutional Revolutionary Party (PRI), he left the party to run as an independent for governor of the state of Nuevo León and won. He went on to leave his post as governor in December, just a little over two years into his term, to dedicate his time to his presidential run.

“I would say that he is considered a bit of a loose cannon, people enjoy listening to him, he makes people laugh, and yes, I think most do see him as independent from the PRI. Few see him as presidential material, though,” Alexandra Uribe Coughlan, a professor of Political Science at the Autonomous Technological Institute of Mexico, told Latino USA. In the first presidential debate, El Bronco’s brashness was on display when he proposed to literally cut the hands off of thieves.

Not a Smooth Process

The process for the independent candidates to appear on the ballot has not been smooth and has been an arduous one for all of the aspiring candidates.

With the 2014 electoral reform, the rules were set for how independent presidential candidates would be allowed to appear on the ballot. A candidate must receive 866,593 signatures from citizens spread out in at least 17 federal entities in the span of 127 days. There were 87 initial aspiring candidates, who, in addition to Zavala and El Bronco, included Armando Ríos Piter, a senator and former member of the Party of the Democratic Revolution; Maria de Jesús Patricio Martínez, an indigenous woman who was picked by the Zapatistas allied National Indigenous Congress to run; and the journalist Pedro Ferriz de Con. Only Zavala, El Bronco, and Rios Piter succeeded in achieving the required amount of signatures. However, this was not without controversy.

In a review by the National Electoral Institute (INE) of the signatures collected by the independent candidates, many were deemed invalid for a number of reasons. The main reasons for signatures being excluded were because the credentials of the signer appeared to be fake, photocopies of the credentials were provided instead of the original credential, and because signers provided invalid or wrong required documents.

After the signatures had been reviewed, only 835,511 out of 2,034,403 of El Bronco’s signatures were found to be valid. The 1,765,599 signatures collected by Ríos Piter were knocked down to only 242,646 valid signatures, and Zavala’s initial 1,578,774 signatures were reduced to 870,168. After the review, Zavala was the only candidate to reach the required amount of signatures, thus, for a brief period of time, making her the only independent presidential candidate allowed to run at the start of the official campaign season.

Then on April 10, the Electoral Tribunal of the Judicial Power of the Federation (TEPJF), the highest electoral power in the country, ruled, 4–3, in favor of El Bronco, ordering the INE to register him as an independent presidential candidate. Part of the rationale of the TEPJF was that the INE did not give El Bronco the opportunity to review and defend the signatures that were invalidated. The judges who ruled in favor of El Bronco argued that if some of the excluded signatures were to be reviewed, he would be able to successfully defend their authenticity and obtain the amount of signatures needed to appear on the ballot.

The feature of having independent candidates run for president comes at a time when many Mexicans are disenchanted with the way democracy functions in their country. In a 2017 PEW Research Center poll, only six percent of people said they are satisfied with how democracy works in their country. Furthermore, according to a 2017 Latinobarometro poll, only nine percent of Mexicans had “a lot” or “some confidence” in political parties. Additionally, according to a 2017 survey conducted by the Mexican Government’s National Statistics, Geography and Information (INEGI), about 90.5 percent of Mexicans living in urban areas have the perception that corruption exists frequently within political parties.

It appears that these widely held feelings have not been translated into support for the independent candidates. Zavala and El Bronco have consistently polled in last and second-to-last place.

Roderic Ai Camp, a leading analyst of Mexican politics and professor at Claremont McKenna College, believes that the best indicator of how the independents might fare in the presidential elections is the 2015 election, an off-year election when independents were running for governor, Congress and in local elections.

“In spite of the surveys that were being done between, say 2014 and 2015, about the popularity of independent candidates, the total percentage of the vote for all independent candidates that ran, regardless you know of what level they were running at, was less than 1%,” Camp said in a phone interview with Latino USA.  “So that really tells you that there’s an ideal out there about how great independent candidates can be, but translating it into actual support has been practically negligible.”

For the 2018 presidential race, Camp thinks that the low numbers Zavala and El Bronco have received in the polls demonstrate that Mexicans do not think they have a chance to win.

“They’ve [Mexicans] realized that despite their ideal of wanting to have an independent candidate, that these two individuals just don’t have any possibility of winning the election so why would they ‘throw their vote away’ and vote for them,” stated Camp.

Zavala’s departure from the race seems to confirm the idea that independents have little chance to influence the race. As Uribe Coughlan notes, Mexicans have been shown to be strategic when they vote.

“If the election is close, many people will ditch their independent candidate to vote against their worst outcome. The closer the election, the fewer votes for independents there will be,” says Uribe Coughlan

Regardless of the trends outlined by Camp and Uribe Coughlan, El Bronco told the El Universal, “I’m never getting off the horse.” He says he will stay in the race for the long haul.