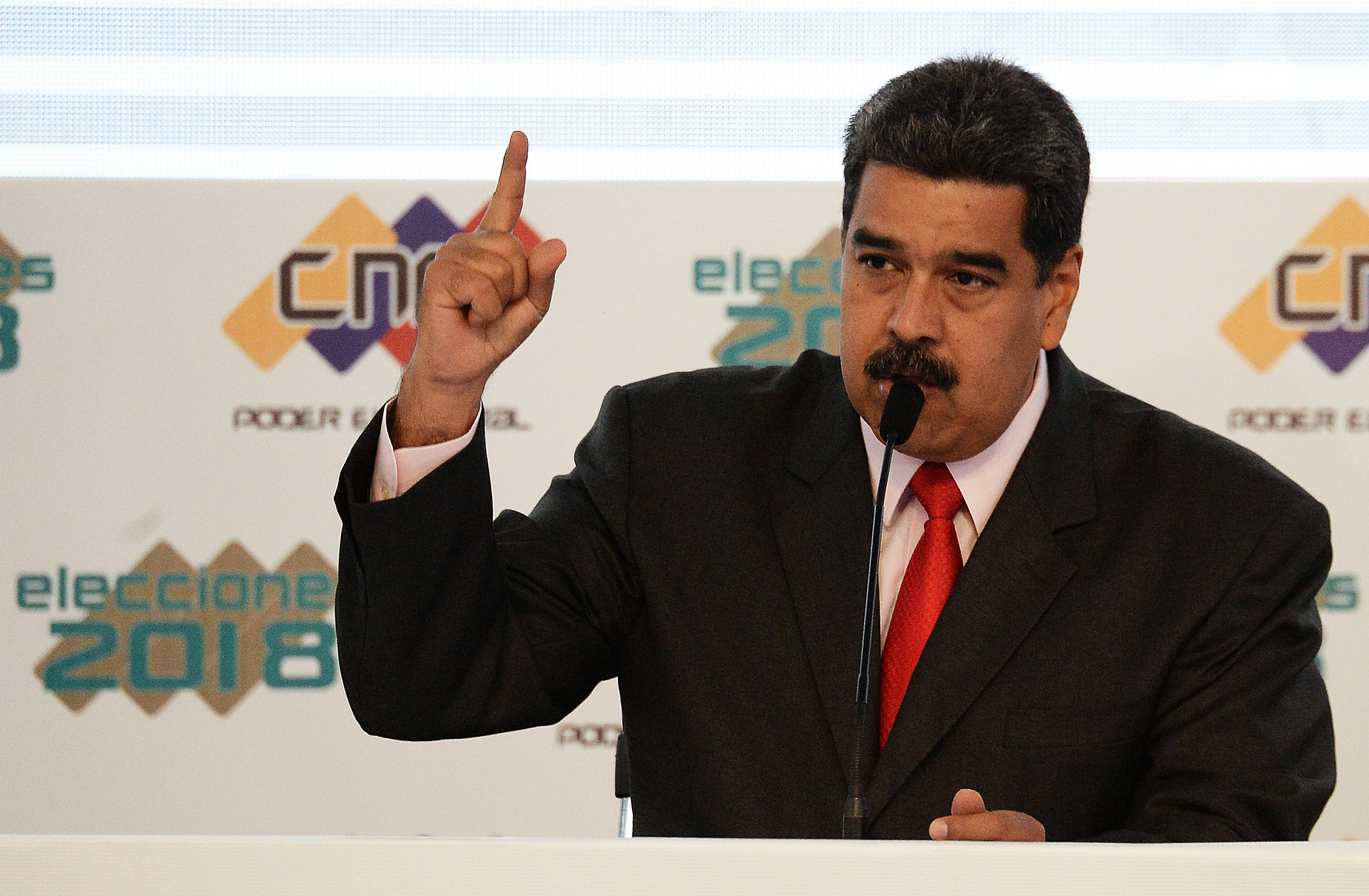 Venezuelan President Nicolás Maduro speaks at the National Electoral Council (CNE) headquarters in Caracas, during the act in which he was proclaimed as re-elected President for the term 2019-2025. May 22, 2018. (Photo by Federico Parra/AFP/Getty Images)

But with six million votes –the lowest turnout for a presidential election in Venezuela after months proclaiming they would reach the 10 million– it was a bittersweet night for the man who Hugo Chávez anointed as his successor on his last TV broadcast.

For Venezuelans, it was an election defined by indifference and controversy. It became clear that the days when the government party and the opposition coalition filled the streets with posters and massive rallies for their respective candidates were long gone.

According to Venezuela’s National Electoral Council, Maduro won by 67.7 percent of the vote. His main opposition, Henri Falcón of the Democratic Unity Roundtable (MUD), said that he won’t recognize Sunday’s vote. Other contenders were Reinaldo Quijada of the Popular Political Unity 89 (UPP89) and Javier Bertucci of Hope for Change party.

Falcón is a strange figure in Venezuelan politics, governing one of the most populous states without never fully aligning with the government or the opposition, while approaching either of them, depending on the situation. With much of the rest of the opposition boycotting the election, he took his chance.

“I never fully liked [Falcón], he always seemed opportunistic.” Liliana told Latino USA. “During the protests, he left those kids alone. But I liked his ideas, particularly to dollarize the economy. I think that’s pretty reasonable.”

Liliana works in a government office and is a single mother of two. She agreed to talk to Latino USA with an assumed name. She’s one of the two million who voted for former Hugo Chávez follower and two-time state governor Henri Falcón.

At best, Falcón was seen as a misguided politician who had overestimated his abilities. At worst, playing along with the government to lend credibility to a dubious electoral system. Something Luis Almagro, head of Organization of American States, accused him of.

For Liliana, who claims to have been bullied at work for suspicions of not being “with the revolution,” voting for Falcón was one of the few ways she could find to express her discontent and feel that maybe she could change things for her and her children.

Javier, 33, is one of the majority of Venezuelans who didn’t go to the polls. He lives in Guarenas, a community near Caracas that became known as “The cradle of Chavismo.” He says what was once a bastion for the Bolivarian Revolution, the election was a non-event.

“There were no official audits, the election itself was called by the National Constituent Assembly, an unconstitutional body,” says Javier, who believes the election was “an evident scam” and that there were many reasons to not be involved.

Last year, massive protests took place with violent clashes between protesters and the National Guard, leaving over 100 dead. The protests were reacting to the Supreme Court’s decision to dissolve the opposition-led legislature.

In the middle of a severe constitutional crisis, the government installed the National Constituent Assembly, a legislative body that, while in theory is writing a new constitution, so far functions as a Maduro-sanctioned parliament with accusations by the voting system provider that the government added at least one million votes.

“They were barred from running, some were jailed or in exile,” Javier says about the leaders of the opposition.

Several countries, including the United States, Canada, Brazil, Colombia, and Spain had stated that they won’t recognize this election, regardless of the results. The opposition is demanding to redo the election, following all the legal stipulations that were ignored and involving unbiased international observers.

Others, such as U.S. senator Marco Rubio, who has taken a special interest in Venezuela, have hinted harsher measures. “There’s no electoral way out while the regime remains in power,” Rubio tweeted just after the results were announced.

When Maduro was elected in 2013, many thought he wouldn’t finish his term. Nobody knew if the Bolivarian Revolution would continue without Hugo Chávez.

Now, despite the threat of increasingly harder sanctions and a four-digit inflation, shortages of food and medicine, and thousands leaving the country daily, there are very few signs that things for Maduro or Venezuela will be different any time soon.