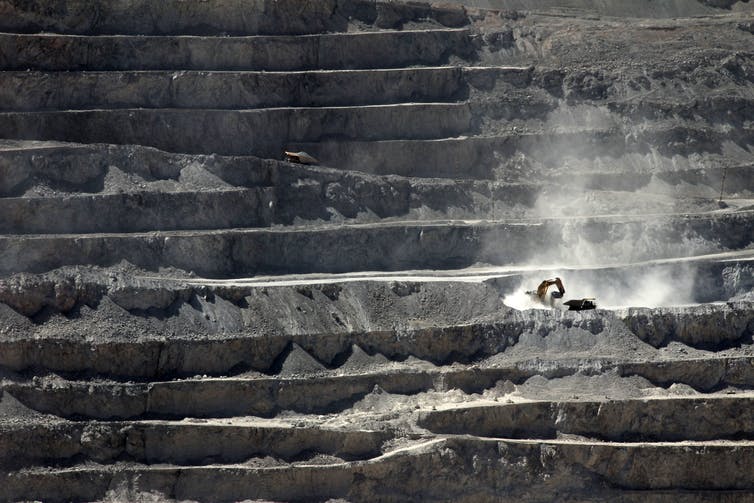 By Paula Serafini, University of Leicester

On May 7 1813, when Argentina was beginning the process of becoming a sovereign country, the first Argentinian law for the promotion of mining was sanctioned. The day has now become a national day of mining. But mining in Argentina is surrounded by a series of controversies that invite us to question this celebratory commemoration. Most notably, resistance to what is known as “open-pit” or “mega” mining is growing.

Open-pit mining is a type of large-scale mining that extracts minerals found in low concentrations from the surface of the earth rather than from tunneling, generating large craters. This method requires large amounts of explosives and water, and the use of chemicals such as cyanide and sulphuric acid for the separation of metals.

From Argentina to Colombia and Mexico, open-pit mining has been at the centre of environmental and human rights conflicts in Latin America for decades now. It is often referred to as the archetype of extractivism due to the magnitude of its environmental and human impact and the alliances between governments and transnational capital that lie behind it.

Mining took place in Argentina throughout the 19th and 20th centuries, but was never one of the country’s principle economic activities. Not until 1993, when under the neoliberal government of Carlos Menem, new mining legislation was introduced. This legislation improved the benefits to transnational companies and laid the ground for the beginning of large-scale open-pit mining for metalliferous minerals such as copper, gold and silver.

In 2017, Mauricio Macri’s government signed a new mining deal, with the objective of attracting even more foreign investment. While the government has claimed the agreement aims to improve environmental regulation, academics, lawyers and activists alike have criticized it for its disregard of current environmental laws. Furthermore, the agreement states that mining companies will now be able to have input on the way mining is taught about in schools, a move seen as an attempt to construct a social license for mining through education.

Regional governments of mining provinces continue to argue that mega mining brings jobs, money and investment in infrastructure. But inhabitants of mining regions have told me how the jobs brought by this type of mining are few, and mostly limited to the construction phase of projects. The influx of resources promised by mining companies and provincial governments are also few and far from what is promised. As a teacher from Andalgalá, a town in the province of Catamarca told me, they promise paved roads and new facilities, and end up giving away a few footballs.

What mining towns are left with instead is environmental wreckage and health problems. In Andalgalá, two decades of mining have led to drought and polluted water sources. The local pediatric hospital reported a 63% increase of respiratory diseases in children in the first four years that the Bajo la Alumbrera mine was in operation. They stopped publishing statistics after that—and requests for further research and statistics on health problems continue to be brushed aside by the authorities.

Meanwhile in the province of San Juan, the Veladero mine (operated by Barrick Gold) has had multiple spillages of cyanide-contaminated water, one of which was has led to criminal charges and a multi-million fine.

While the effects of mega mining are grave and often irreversible, the media have only reported on the harmful consequences of this activity on occasions when it was politically strategic to do so. But communities across the country have come together to fight against mining projects that threaten the environment and their way of life.

In Esquel, in the south of the country, a referendum in 2003 resulted in 81% of opposition to mega mining. In Famatina, in the north-west, the threat of mega mining led to a mass uprising in 2012.

The people of Andalgalá meanwhile, where the Bajo la Alumbrera mine has been in operation for two decades, have stopped the opening of Agua Rica, a mining project three times the size of the former, for eight years now. The local assembly organizing against mining, Asamblea del Algarrobo, has pursued a number of routes in their fight, from legal challenges to direct action.

Most prominent in Andalgalá is the range of creative actions that have sprung up. An inter-generational group of local women called Las mujeres del silencio (the women of silence) have staged performative protests outside the headquarters of mining companies. A community radio has been created. And a wealth of murals celebrating the right to life and to water–and denouncing the repression of protest—can be found covering the walls of the town.

The fight against mega mining is part of a far wider struggle in Argentina and Latin America against the expansion of an extractive economic model. This approach leads to what sociologist Maristella Svampa and environmental lawyer Enrique Viale call maldesarrollo (bad development). Resistance to such practices is not just about pollution, but also about saving (or rebuilding) the social fabric that is torn apart by extractive activities, and establishing the right to self-determination.

In Andalgalá, I am often told that even though the fight against mining is far from over, the cultural battle has been won. The myths of progress associated with mining have been debunked—and the struggle has generated a creative space for thinking about alternative economic and governing models.

At the present time, the government and national and international mining companies are pushing to reverse some of the wins. But as transnational companies and the government attempt to intensify extraction, cultural resistance offers a space for imagining alternatives to false and bad developments.