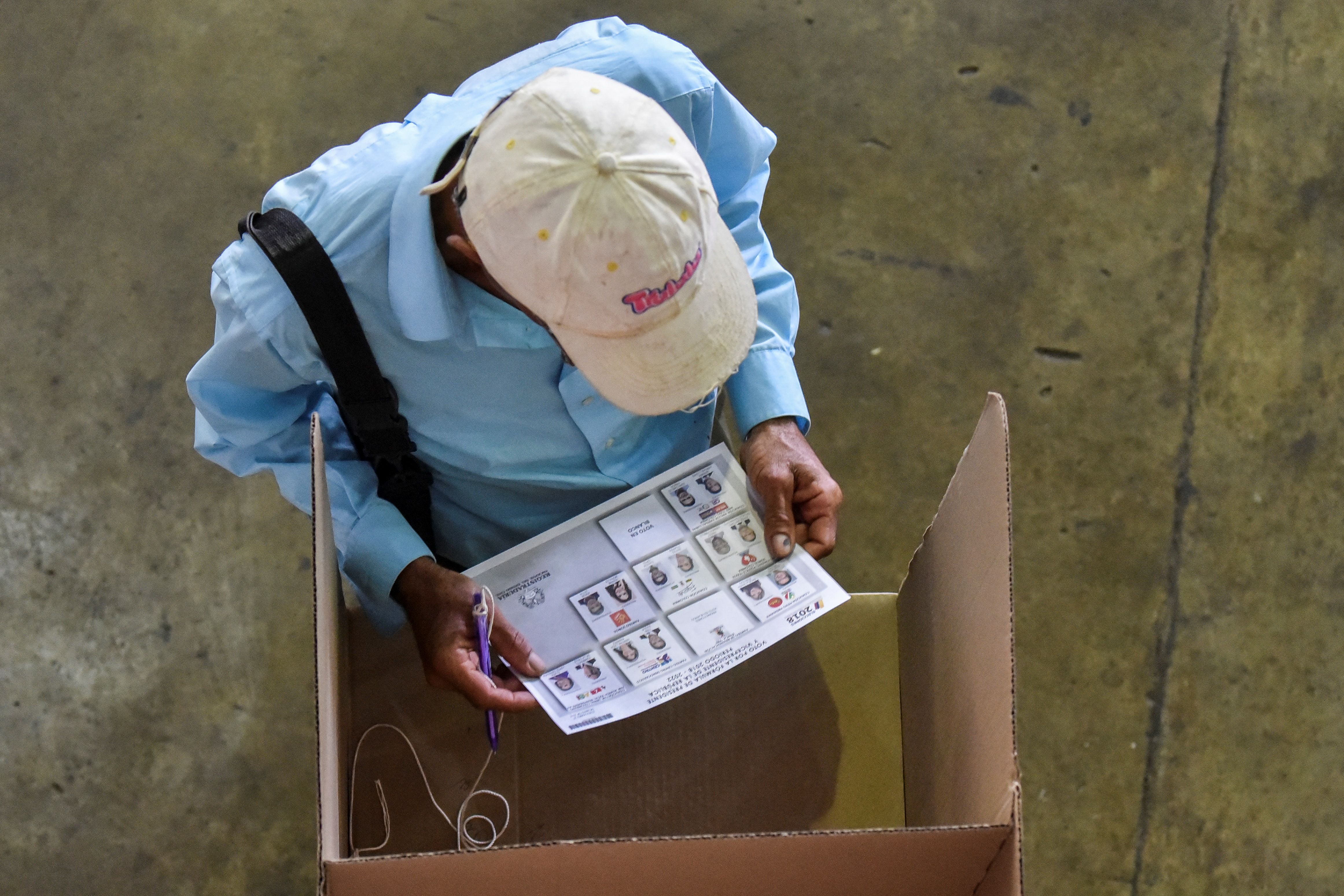 A man votes at a polling station in Cali, Valle del Cauca Department, during presidential elections in Colombia on May 27, 2018. (Photo by Luis Robayo/AFP/Getty Images)

There were five candidates competing in Colombia’s May 27 presidential election, but peace was the main question on the ballot.

In late 2016, the Colombian government signed a controversial accord with the Revolutionary Armed Forces of Colombia, or FARC, a guerrilla group. Election season closely followed the peace deal —an incredibly divisive issue that was defeated at referendum just over a month before Congress approved it— turning it into a polarizing campaign issue.

Implementation of the ambitious agreements with the FARC remains a work in progress. Colombia is also currently negotiating another peace process, with the National Liberation Army guerrilla group.

The next president must decide whether to keep to this path or take a different route.

None of the five candidates received over 50 percent of the vote on May 27, so the top two candidates —conservative Iván Duque and the leftist former Bogota Mayor Gustavo Petro– will face off in a June 17 runoff.

Their visions for the country’s future could hardly be more different.

Peace on the Agenda

This is not the first time peace has been on the ballot in Colombia.

The FARC’s violent 52-year campaign against the government constituted the longest-running conflict in the Western Hemisphere. According to our research on Colombia’s violence, different plans for quelling it have featured prominently in every Colombian election since 1998.

But this year is different. After decades of stalled negotiations, a peace process is finally in motion. This is the first presidential election in Colombia in which the FARC participated not as an armed group but as a political party.

Now, the two presidential candidates disagree on what should happen next.

Duque, a right-wing senator from the Democratic Center Party, who received 39 percent of the votes, believes the deal is too lenient on Colombia’s former guerrillas. If elected, he promises to renegotiate the accords to include punishment for demobilized combatants’ wartime crimes.

Petro, who is committed to upholding the current accord with the FARC, won 25 percent of the vote competing against two other pro-peace candidates. Petro once belonged to an armed guerrilla group himself: the the M-19, which signed a peace deal with the Colombian government in the early 1990s.

This difference in approaches towards peace is evident on both candidates’ webpages. Duque’s does not even mention the word “peace.” But peace is a central element of Petro’s presidential agenda.

The FARC accord is not the only point of disagreement between Duque and Petro. The two also represent opposite ideological positions.

His economic proposals would reduce taxes on the wealthy and ramp up mining and oil extraction in Colombia.

Petro, on the other hand, is a leftist firebrand. As mayor of Bogotá from 2012 to 2014, he promoted human rights and pushed through numerous social welfare programs.

But he is mostly remembered for a scandal brought on by his administration’s attempt to take over the capital city’s garbage collection, which was then privately run. Trash piled up for days.

In December 2013, Petro was removed from office by Colombia’s top prosecutor. A court order reinstated him in April 2014.

The two candidates’ visions for Colombia’s future differ so dramatically that each stands accused of representing a danger to the nation. Well-crafted social media campaigns, whose origins remain largely unknown, have spread false news stories, doctored photos and disinformation about both throughout the presidential campaign.

Duque is portrayed as a juggernaut who will destroy the peace process and undermine Colombian democracy. He is also derided as a pawn who will allow former President Uribe —a deeply divisive figure accused of having ties to the drug trade— to once again control the country, despite being constitutionally prohibited from seeking another term.

Petro is said to be a Marxist and a follower of the late Venezuelan populist leader Hugo Chávez who will lead Colombia into economic and social dystopia. His management of Bogota is portrayed as chaotic.

But they’re working. Surveys show that many Colombian voters made their choices on May 27 driven largely by fear: They voted against Petro or Duque, not for them.

In this sense, Colombia’s online disinformation campaigns recall the online voter polarization efforts that predated major ballots in the United States and United Kingdom in 2016.

Both campaigns have likewise fueled this extreme rhetoric throughout the campaign season.

As the June 17 presidential runoff approaches, Petro and Duque will likely seek to sharpen their differences to court supporters of the three candidates who did not advance into the second round of voting.

To win, Duque needs supporters of the hard-line right-wing candidate Germán Vargas Lleras, who received almost 8 percent of the vote. He must also charm centrists inclined toward his politics but fearful that democracy would suffer under former President Uribe’s renewed influence.

Petro will try to earn the trust of supporters of Sergio Fajardo, the even-keeled former mayor of Medellín who came in a very close third with just under 24 percent of votes. He also hopes to gain leftists who voted for Humberto de la Calle, the lead negotiator in Colombia’s 2016 peace deal.

These moderate voters believe in the peace process. But they are uncertain about Petro’s leadership style and radical economic proposals.

Whoever wins on June 17 will face an enormous challenge. Nothing less than the future of a perilously fragile nation will rest in their hands.