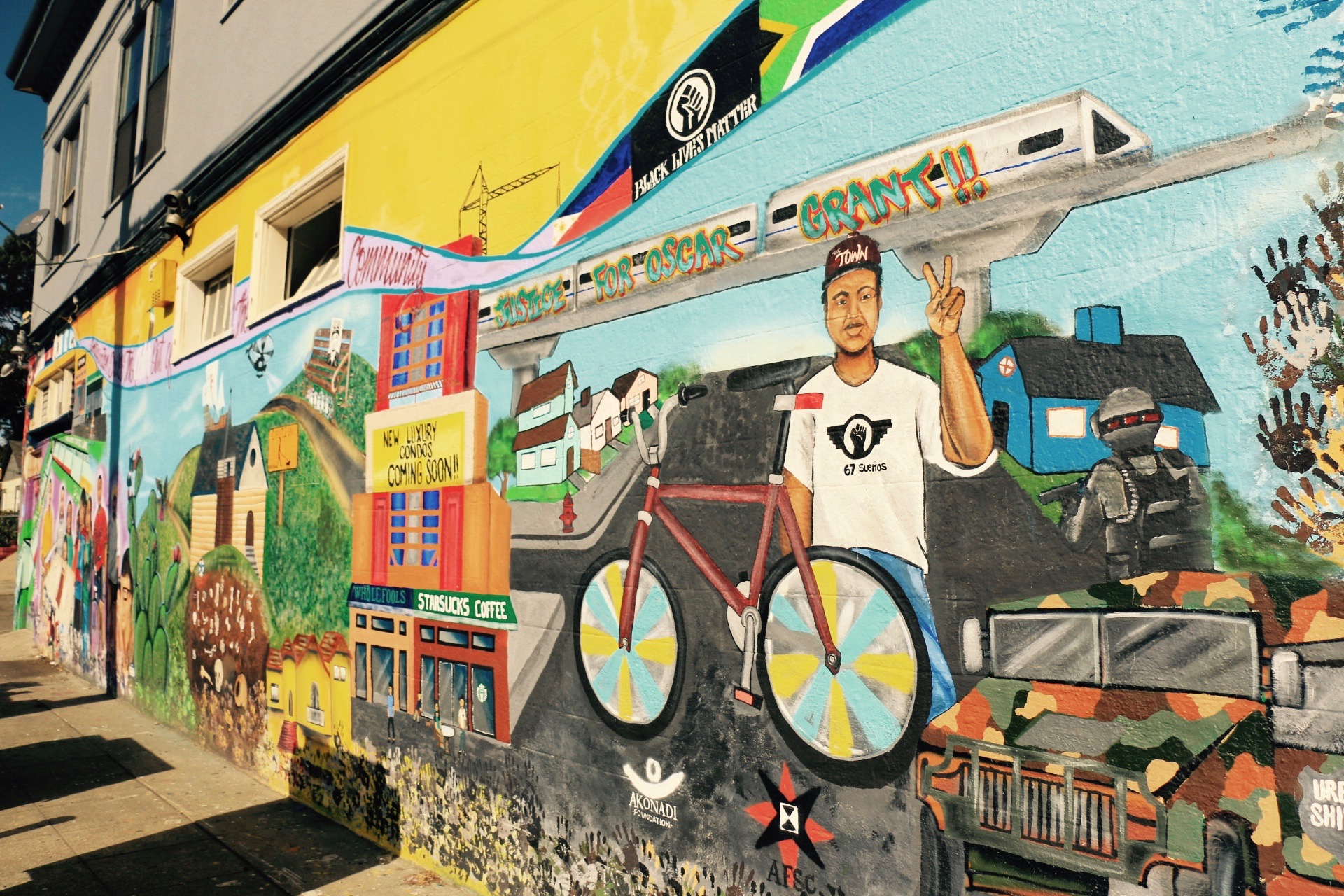 OAKLAND – Earlier this year, Hasta Muerte Coffee made national headlines because of its refusal to serve police officers. Now, the collective tells Latino USA, it is fighting for survival, becoming the latest example of a meeting space for communities of color that feels threatened by outside forces.

While Hasta Muerte has received an outpouring of local support, the collective has also received hundreds of pieces of hate mail, death threats and attempts by protestors to oust the owners. One email stated, “I can hardly wait to hear the news reports describing how a drugged-out weirdo came into your shop, started stabbing/shooting people and no cops came to help because they are not welcome.’  Signed- Ex-cop.”

Meanwhile, the Bay Area’s rising rents and housing crisis have made it difficult for Hasta Muerte and coffee shops like it to sustain themselves. Last week, Hasta Muerte Coffee announced that their space was going up for sale. They must raise a total of $150,000 by June 8 in order to stay in their building, and they have started a GoFundMe campaign to raise $75,000, while taking out private loans to cover the rest.

A Brief History of Coffee Shops as Organizing Spaces

The struggle for cultural centers to withstand these institutional pressures is centuries old. One can trace the first coffee shop that inspired political dissent as far back as 1457 in Istanbul. Later in the 1600s, coffee houses spread throughout London and were called “penny universities” because they gave rise to the exchange of intellectual thoughts and ideas. The French and American Revolution have their roots in the organizing efforts that took place inside coffee houses, as do the Spanish Anarchist Revolution and the Cuban Revolution.

Longtime Fruitvale resident, community organizer and advisory board member of the East Side Arts Cultural Center, Arnoldo Garcia, says it’s a longstanding tradition for coffee shops and cultural centers to be at the nexus of social change.

“Originating from Europe where there was a lack of meeting spaces among organizers or activists from factories and unions, and anarchists would meet in cafes because they would be able to meet inconspicuously,” Garcia tells Latino USA.

“In the Mexican, Chicano communities, from the ’50s onward, we had cultural centers all over the place, and of course, California was a hotbed for cultural centers,” he says. “And that was a way to organize both art and politics, and organize the Chicano Student movement, different conferences and different gatherings.”

The formation of La Piranya Coffee Shop in Los Angeles in 1967 helped build a political platform and galvanize the Chicano movement and the student walkouts of 1968. In Oakland, the Mexican American Liberation Art Front (MALAF) was one of the first Chicano art collectives, where they created posters for the grape boycott of Cesar Chavez and against the Vietnam War. The collective also founded the cultural art center Galería de la Raza in the Mission District of San Francisco in 1969. And in the ‘60s, Caffe Trieste was the meeting spot for beat poets like Allen Ginsberg and Lawrence Ferlinghetti, which helped launch a cultural revolution, the radical bookstore and publisher City Lights, and played a key role in the HOWL censorship trials and the landmark court ruling that poems “could not be suppressed as obscene by local authorities.”

During the 1960s, Marcus Books was founded in San Francisco’s historically Black Fillmore district to honor Black Nationalist Marcus Garvey. It was described as “a center of black San Francisco’s intellectual and cultural life,” and was fundamental in the development of influential thinkers like London Breed, San Francisco’s acting mayor, and author Ishmael Reed, a MacArthur Fellowship Award winner.

At the same time that Marcus Books was thriving, there was a concerted effort from the American government to close radical Black bookstores. According to The Atlantic, J. Edgar Hoover’s FBI infiltrated these bookstores as part of COINTELPRO, a counter-intelligence program designed to carry out acts of  “espionage and falsification.”

As of today, many of these spaces have closed. For instance, Marcus Books closed its doors in 2014. Its locks were actually changed, but it reopened in 2016. The eradication of these spaces is also symbolic of the displacement that the Black community and people of color from the Bay Area have faced for years.

When describing the importance of these type of cultural centers, Reiko Redmonde, 15-year volunteer, curator and manager of one of the oldest radical book stores in the East Bay, Revolution Books, says, “I think the most important thing is, yes, people need organizing centers, but people also need places to discuss ideas and meet other people like themselves that are concerned about the state of humanity and the planet. It’s all too rare these days, I think.”

She explains that growing up in Berkeley in the 60s, she didn’t have a cultural center like Revolution Books.

“There were places like the Free Clinic where people would gather and when the [Free Speech] riots happened in Berkeley [in the ‘60s], around People’s Park,” Redmonde tells Latino USA.“People in their homes would put signs in their windows that said, ‘You’re welcome here.’ That would be a place where people would go and seek refuge from being tear-gassed and beaten.”

The need for cultural centers arose in Berkeley out of a desire to have a meeting place to organize away from police brutality. It was during this time that the historic Caffe Med in Berkeley began its legacy as a meeting place for activists protesting the Vietnam and Iraq War and later on, mobilizing the Occupy movement. Caffe Med has since changed ownership.

Not everyone has met these types of spaces with open arms. Like Hasta Muerte, Revolution Books has been the site of many attacks by groups calling themselves “patriots.” Since President Trump’s election, the store has been attacked 10 times, the volunteers have been doxed (private information shared with the public), physically assaulted and threatened. One member of the far-right men’s organization Proud Boys threatened to burn down the store.

This Trump supporter threatened to burn down a bookstore and hurled graphic insults at an employee. Is this what makes America great? pic.twitter.com/LxGqebVvoa

The importance of preserving a culture’s history in San Francisco can be illustrated in the art and activism of the Nicaraguan poet, Roberto Vargas. He was an organizer and professor at San Francisco State University who helped establish the School of Ethnic Studies. Roberto also helped organize the Free Los Siete movement, one of the first instances of mass protest and direct action against police brutality faced by Latinos in the Mission District. And in solidarity with Nicaraguans after the 1972 earthquake, which killed 10,000 people, he helped form the Nicaraguan Civic Committee, training and later fighting in the Sandinista army.

In the ‘70s, Roberto’s meeting spot was Café La Boheme in Mission District of San Francisco. It was the home to many like-minded Nicaraguan revolutionaries and Sandinistas. Pillars of the Latino literary community like Alejandro Murguía, the former poet laureate of San Francisco, would stage political readings alongside Roberto at the coffee shop. Murguía went on to found the Mission Cultural Center for Latino Arts in 1977, a center where artists still hold events and organize around causes like police brutality.

But today, Café La Boheme is not the vibrant, busting at the seams location it was in its youth. It struggles to stay open despite its significance to Bay Area Latinos. As the Mission District continues to gentrify, and Latino owned or frequented cultural centers are marginalized to slivers of 24th Street and Mission Street, the question remains of whether a culture and a neighborhood’s spirit can be preserved when the spaces where it thrived are gone.

Through it all, the struggle to survive as a cultural space continues. At Hasta Muerte, a mural is painted on the side of the coffee shop, it’s a collaboration between the Mexico City artists Mazatl and Killjoy that illuminates the situation the owners finds themselves in. When speaking of the mural’s significance, the Hasta Muerte collective says, “The jaguar is known to represent power in the Americas, in this case power that can also cause suffering. The coffee tree spirit offers comfort to the transfixed beast, as our cafe space hopes to offer to those who would find common cause and struggle if it weren’t for the many afflictions they are battling daily.”

Like the mural, Hasta Muerte Coffee reflects the history of political struggles of marginalized people in the Bay Area, as well as their continued fight to become not an anecdote in history, but to live on.