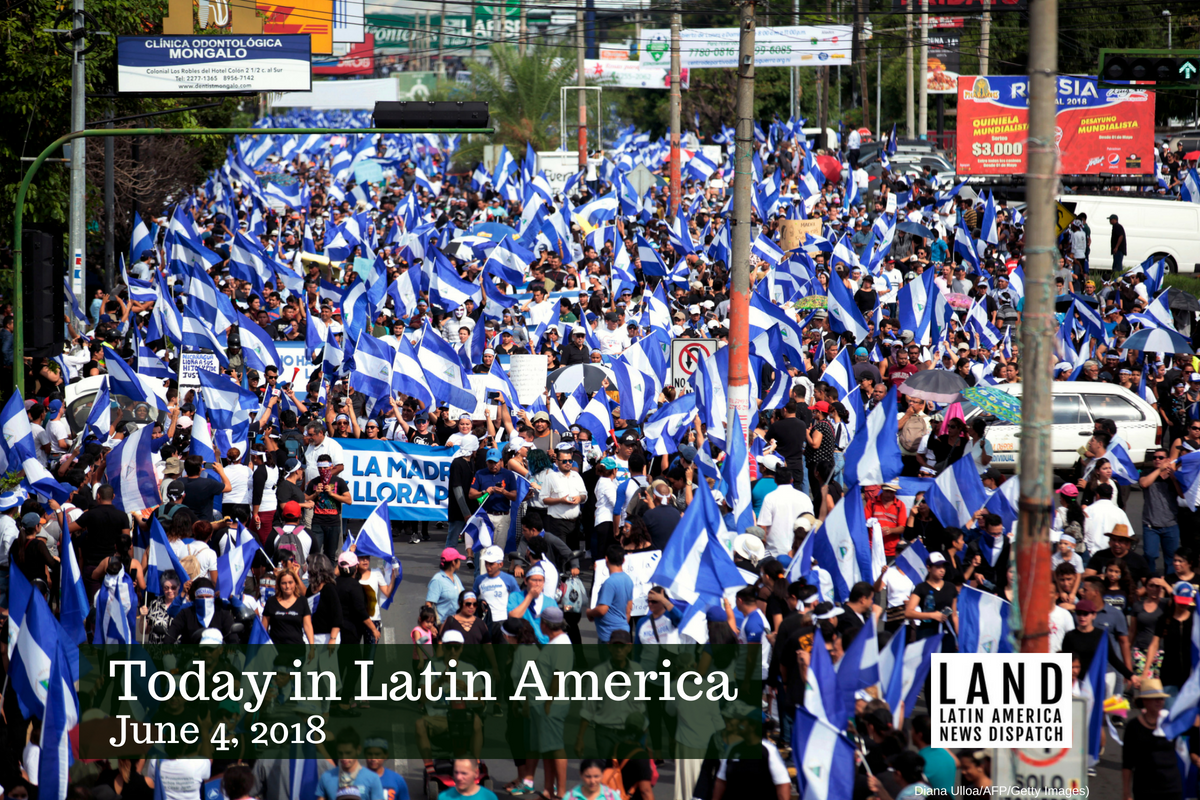 Anti-government protesters take part in Nicaragua on Nicaragua's National Mothers Day, in Managua on May 30, 2018. (Photo by Diana Ulloa/AFP/Getty Images)

NICARAGUA: More than 110 people have been killed during six weeks of protests in Nicaragua. Opposition to a legislation aimed to cut pensions initially sparked the outrage, and although the government quickly backtracked demonstrators went on to demand the resignation of former Sandinista rebel leader President Daniel Ortega and his wife and Vice-president Rosario Murillo. On Saturday, accusations of fraud and corruption to keep Ortega in power pressured the chief of the Supreme Electoral Council, Roberto Rivas, to resign.

Last week, 15 people were shot to death during a Mother’s Day march held in Managua, the capital city, to honor the mothers of those who had been killed during previous protests. Civil society organizations blamed the deaths on snipers belonging to the police and pro-government paramilitary groups while the government rejected any liability and said undefined criminal gangs were responsible instead. On Sunday, police forces ended a siege on a church in the city of Masaya, which is part of the metropolitan region of the capital, where some 30 protesters had taken refuge. Two people died.

MEXICO: Two more electoral candidates were murdered this weekend, raising the number deaths since September to at least 110 according to Mexico’s national police. Pamela Terán, a PRI candidate for Juchitán’s council in Guerrero, her driver and her photographer were killed early on Saturday. And Juana Iraís Maldonado, a Green Party candidate for Puebla’s legislature, and City Public Health, Environment and Education Councilor Erika Cázares were also murdered on Saturday.

MEXICO: Mexican federal prosecutors announced on Friday they were taking over the investigation into the disappearances of 28 people in the northern border city of Nuevo Laredo. The office taking charge specializes in abductions by security forces, it is investigating allegations that Mexican marines participated in the forced disappearances.

CUBA: On Saturday, Cuba’s parliament approved a commission to draft a new constitution. Presided over by former President Raúl Castro, the commission will be comprised of about 30 people including current President Miguel Díaz-Canel. The new constitution intends to formalize the recent economic and social opening-up while maintaining the “irrevocable nature of socialism”. The charter is expected to include a limit of two five-year terms for presidents and the legalization of same-sex marriage, the continuation of a Communist Party-led system and limits to freedom of speech and the press for “the purposes of socialist society.”

PUERTO RICO: The Institute of Statistics of Puerto Rico sued the archipelago’s Health Department on Thursday demanding the release of data on the number of deaths following Hurricane Maria. The Health Department released some information on Friday saying 1,397 more deaths were reported from September to December in 2017 than in 2016 but did not provide causes of death.

HAITI: Taiwan authorities announced on Thursday that they will lend Haiti, one of its last foreign allies, $150 million for infrastructure development. Only 18 countries continue to recognize Taiwan as an independent nation after the Dominican Republic and Burkina Faso changed alliances to Beijing last month.

GUATEMALA: The Volcán de Fuego volcano erupted yesterday killing at least 25 people and injuring 20. National Disaster Coordinator Sergio Cabañas said an undetermined number of people were still missing and 3,100 people had been evacuated from nearby communities. Ash blanketed the Guatemala City area leading to the closing of the capital’s international airport.

VENEZUELA: The Venezuelan government released from prison 79 opposition political activists as a goodwill gesture to ease tensions after the disputed reelection of President Nicolás Maduro. But a coalition of opposition parties says there are still about 300 political prisoners, and while the government has said it will release more people it has ruled out the release of those accused of homicide, which includes the best known of President Maduro’s critics, Leopoldo López.

BRAZIL: The head of Brazil’s national oil company Petrobras, Pedro Parente, resigned on Friday, following a nationwide strike by truck drivers against diesel prices. The strike had led to shortages all around the country and only ended earlier in the week when President Michel Temer announced plans to subsidize a 10 percent drop in the price of diesel for 60 days, reversing Parente’s 2016 decision to stop subsidizing fuel and peg it to fluctuating international prices which appears to have led to his resignation.

ARGENTINA: Demonstrations that began last week in Argentina culminated on Friday with tens of thousands protesting in front of the presidential palace against the government’s economic policies and its unpopular decision to seek help from the International Monetary Fund to stop an inflation rate of 25 percent a year,one of the world’s highest. But many in Argentina still blame the IMF’s austerity policies for the disastrous economic crisis that hit the country in 2001, a recent poll found 75 percent of Argentines think seeking assistance from the IMF isn’t a good idea.