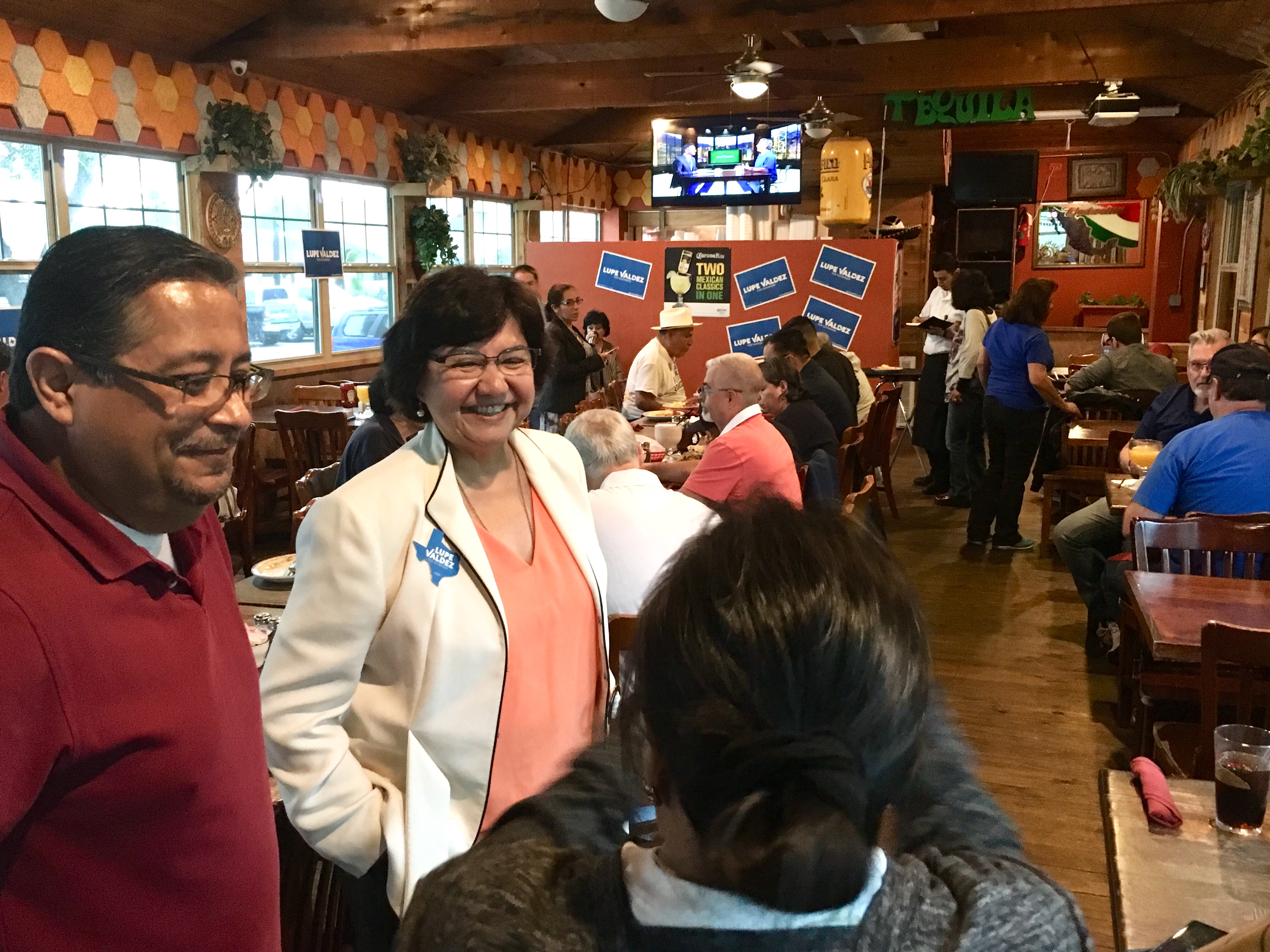 AUSTIN – Lupe Valdez stands in sharp contrast to what is expected of a traditional Texas governor. She is Latina, gay, short in stature and worked her way up the political ladder starting from humble beginnings. When the former Dallas County sheriff defeated Andrew White, earning about 53 percent of the vote, in the May Democratic primary runoff for Texas governor, she caught the attention of politicians on both aisles and of political pundits across the country.

Her first election was in 2004 when she became the nation’s first openly gay, Latina sheriff. She said she didn’t realize the significance of her win at the time, and what it meant for Latinos or the LGBT communities.

“It’s not just about Latinos. We identify with a lot of folks. What good would we be if we’re a one-issued person?” Valdez told Latino USA. She ran then because she wholeheartedly believed she had the leadership traits that could best serve the community at large. That is what she hopes to do again if elected governor in November.

She aims to unite Texans instead of causing, or focusing on, divisiveness.

“We are focusing on kitchen-table issues that keep everyday Texans up at night. Latinos, like other Texans, want a public education that will enable their children to compete in a global economy, quality and affordable health care and an economy that works for everyone, not just a select few,” said campaign spokesperson Juan Dominguez.

Valdez says that her vision of a better future for Texas includes more fairness, tolerance and an environment where everyone has the same opportunity to succeed.

After last month’s runoff results, supporters and opponents alike pondered whether the San Antonio native who beat a Houston businessman and son of late former governor Mark White for the Democratic nomination, could eventually unseat Republican governor Greg Abbott. After Texas state senator Wendy Davis’ unsuccessful run for governor in 2014, the hopes of Democrats who were positive that she could turn their deep red state blue, or even purple, were immediately dashed.

But the election of President Donald Trump in 2016 brought on a new sense of urgency among Texas Democrats and moderates alike that change was needed. Believing policies implemented by the Trump administration, especially in terms of immigration, were draconian in nature and further divided the country, Latinos have begun showing up at voting polls in greater numbers than before. Experts believe these voters could make or break Valdez’s gubernatorial bid.

“She has a very uphill battle. It’s going to take a long shot for her to win,” said Professor Sharon Navarro, who specializes in women in politics, Latino politics and race in American politics at The University of Texas at San Antonio.

Valdez will need to rely on financial support from the Democratic Party, both at the state and federal levels, she said. Navarro said the national party has been hesitant to pour funds into Democratic candidates in Texas in the past due to heavy conservative opposition.

“She’s going to have to go into areas that make her a little more uncomfortable and try to garner support of Independents and even swinging Republicans who are falling in to favor of the Trump administration, and the lack of real policy for addressing school safety,” Navarro said.

Valdez must appeal to voters by sharing her plans for improving Texas rather than relying so much on her common background with lower-to-middle-class voters.

“Greg Abbott already has a 30-second advertisement of her flipping and flopping on several issues, so she’s got to take a stance,” Navarro said. “I think Latinos would appreciate a stance, whether right or wrong, but coming up with something and standing by it.”

Valdez recently drew criticism for her perceived silence on school safety following a May mass shooting at Santa Fe High School in Texas. Her pro-second amendment opponent said thoughts and prayers weren’t enough in the wake of the tragedy – he held round-table discussions that included state officials and law enforcement representatives about how to be proactive moving forward.

On June 1, Valdez responded to the school safety issue by writing an op-ed that was published in the Houston Chronicle. She said the proposals resulting from Abbott’s discussions don’t do enough to address the gun violence crisis.

“Many of the ideas like increased mental health counseling and enhanced security are essential, but ignoring the broader issues proves again that we need leaders with the will to act to prevent violence both inside and outside of schools,” Valdez wrote.

Navarro said the former sheriff could increase her effectiveness by holding more town halls and engaging in dialogue with voters, rather than opting for op-eds as she did with school safety.

“She could have had a meeting with top Democrats in the state to come up with a policy to counter his 40-point policy, but she didn’t do any of that,” Navarro pointed out.

Valdez drew criticism for her inability to directly answer a question at an April town hall about her decision to honor every federal detainer request in 2016 while she served as Dallas County sheriff. The lack of direct response was a deciding factor in Jolt Texas’, the hosting political mobilization group for Latinos, decision to endorse White instead of Valdez.

She echoed her previous comments that sheriffs do not have authority over U.S. Immigration and Customs Enforcement (ICE) but that as governor she would not allow the burden of such decisions to be placed on law enforcement.

Valdez said the governor has no vote on immigration, but she continues advocating for a path to citizenship, especially for Dreamers, who she says have promising futures as contributors of society.

“They’re educated here, grow up here, go to school here, have their businesses here and they are part of the economy,” she said. “Of course, they should be citizens.”

She also said the governor has influence over Senate Bill 4, the so-called “Show Me Your Papers” law, and whether to send extra National Guard troops to the border.

“As a Latina I really identify with Lupe the most out of the white men running for office. But out of everyone she has really let me down the most,” said Karla Quiñones, the W.T. White High School student from Dallas who asked Valdez the immigration question.  She said Valdez declined to go into further depth on immigration even after being approached when the town hall concluded.

By choosing to work with ICE, as Quiñones put it, Valdez helped “[tear] apart families” and while she wants to love Lupe, she can’t afford to “go around voting for someone just because they look like me.”

Quiñones remains open to supporting Valdez. “If she wants my support she is going to have to make more promises to protect the Latinx community. She should also stop taking money from super PACs, I am tired of wondering if my representatives represent me or their wallets.”

While Quiñones spoke to Latino USA as an individual, Jolt Texas said it’s undecided on whether to endorse Valdez.

“We are going to regroup our endorsement committee in July to make an official announcement,” said spokesperson Tania Mejia.

Other potential supporters such as Jennifer Ramos, who serves as President of Austin Young Democrats, believe Valdez has a genuine possibility of winning. However, her organization doesn’t typically make an official endorsement until closer to the election.

“We are going up against a Republican incumbent that is well-liked by constituents, but I feel like our state is non-voting,” Ramos said. “There is a huge potential votership that has never been incentivized or motivated to come out and vote. In spite of everything, I think she has the opportunity to bring out voters that have never been brought out before.”

Valdez’s underdog story and ability to relate to everyday people could result in expanding the Democratic party in Texas, Ramos said. She has seen that potential first-hand through her mother, who was apathetic about the voting process, even through promising campaigners such as Wendy Davis, until she heard Valdez speak.

“Lupe will bring out working-class families. I think, overall, she’s going to help show that Texas is not one-size-fits-all,” Ramos said.

Valdez has never shied away from disrupting the status quo. She told Latino USA that when she served as sheriff her constituents would express appreciation for her ability to break the “good old boy’s club” mold.

She relates to everyday voters. She grew up as one of eight children of migrant workers in the so-called “poorest zip code” of San Antonio. She took the bus across town to attend a better school. Though her parents were financially challenged, they took pride in the way their home and yard looked. They spoke Spanish at home.

Valdez said she didn’t realize she was college-material until a substitute teacher pulled her aside and encouraged her to aspire for higher education.

Her family faced instances of discrimination and she would later have other hurdles to overcome as a Latina and gay politician. However, she saw those challenges as stepping stones rather than stumbling blocks.

She worked for U.S. Customs and Border Protection and the Department of Homeland Security, a position that offered her the opportunity to travel to South America on temporary duty.

“Education, healthcare and an economy that works for all are the three things that every Texan is concerned about,” Valdez reiterated. “No parent should have to worry about the ability of their child to compete in a global economy. No one is talking about handouts or giveaways.”

The Houston Chronicle reported that a day after media revealed that Valdez had more than $12,000 in overdue tax bills, Valdez began paying them off.

Valdez’s campaign faulted high property taxes for the lapse and said the information was incorrect.

“Sheriff Valdez has been making payments on her property taxes since January. She did not start making them after media reported them,” Dominguez said.

“Under Greg Abbott’s failed leadership and neglect of public education, property taxes are unpredictable and burdensome for Texans everywhere, including Sheriff Lupe Valdez,” he added. “Sheriff Valdez is going to pay off her 2017 property taxes before July 1. She’s done this in past years as have many everyday Texans.”

Despite the challenges that lie ahead, Professor Navarro noted the significance of Valdez winning the Democratic nomination. “It’s historic. She’s a trailblazer in her own right.”

Even if she doesn’t win, Valdez has made an introduction and opened possibilities for future Democratic politicians in a “very conservative, very white” state, Navarro said.