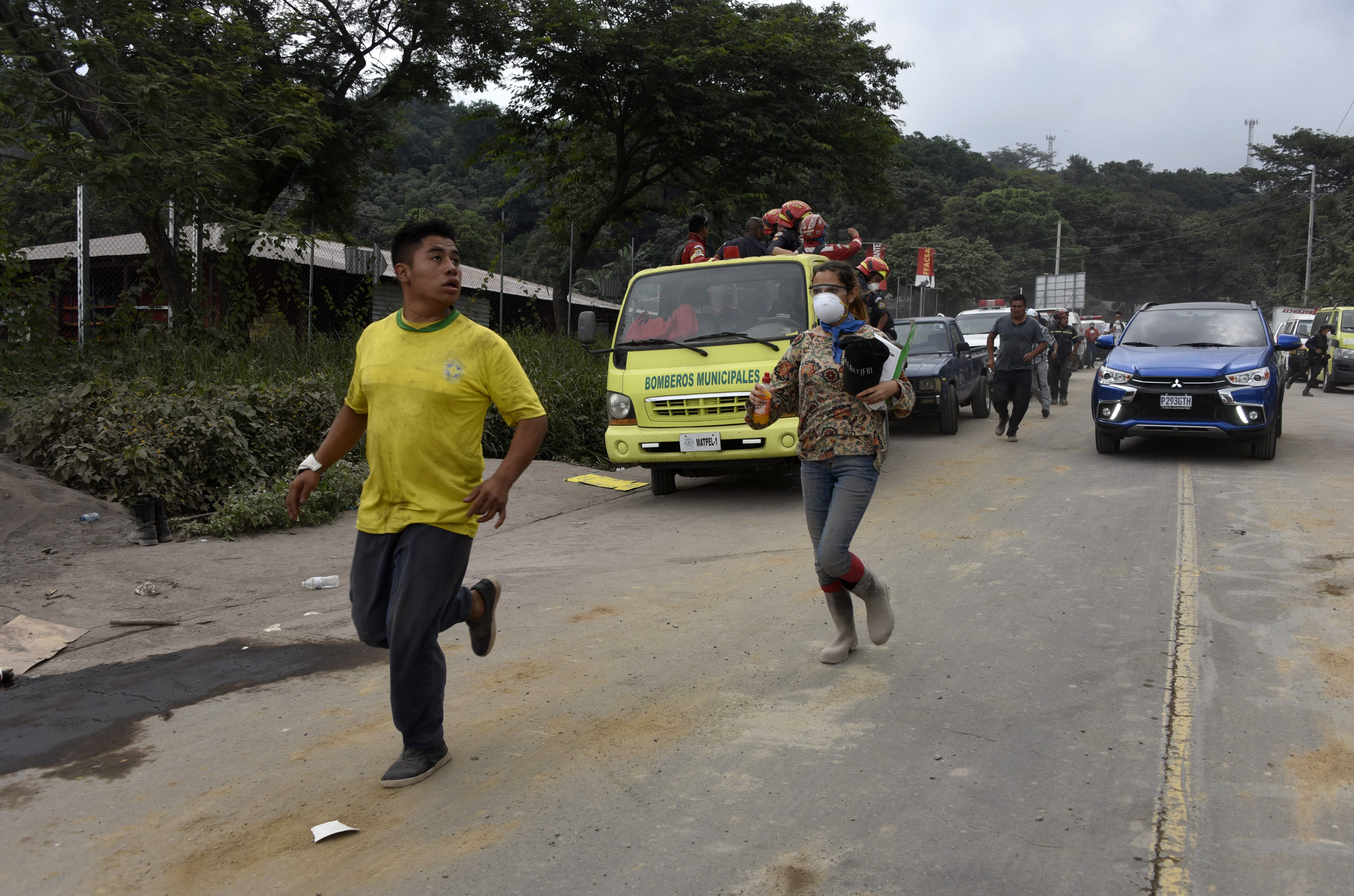 Rescue workers search more bodies from under the dust and rubble left by an explosive eruption of Guatemala's Fuego volcano. (Photo by Johan Ordonez/AFP/Getty Images)

By Dave McGarvie, The Open University and Rebecca Williams, University of Hull

Dozens of people have been killed, and with many more missing, after Volcán de Fuego (Fuego) in Guatemala erupted on June 3, 2018.

In recent years, Fuego has regularly ejected small gas and ash eruptions, which hold little risk to surrounding populations. But Fuego also has a reputation for producing larger explosive eruptions. These larger eruptions have two main primary hazards–falling ash and bombs (collectively known as tephra), and pyroclastic flows. Of these two, pyroclastic flows are the big killers, and are responsible for the deaths from the latest eruption. So, just what are these flows and why are they such killers? And what can people do to avoid them?

Footage taken from a road bridge over a dry valley from on June 3 at Fuego shows what appears to be a soft and billowing ash cloud gently flowing down the volcano. It looks innocuous. Spectators and officials watch mesmerized, but then the cloud moves into the valley and heads directly towards the bridge. Unease spreads and soon alarms sound before people rush away just in time. Footage shows the ash cloud quickly pass under and then over the bridge. These spectators escaped death by seconds, as this benign-looking ash cloud is the notorious killer that is a pyroclastic flow.

Pyroclastic flows (also known as pyroclastic density currents) contain a hellish combination of hot rock fragments (pyroclasts), super-heated air, and volcanic gases. You can expect temperatures of 100-600°C and they can travel fast – very fast on steep slopes. Speeds generally range between 70-200mph, but they have been recorded reaching 450mph. As they are heavier (denser) than air, they tend to be funneled into valleys. But their higher density also gives them momentum, so they can travel up the sides of valleys, and even over mountains. The worst place to be when a pyroclastic flow is on the move is in a valley, which is why the spectators at the road bridge were lucky to escape.

What surprised many volcanologists (including us) is that people were actually standing and taking pictures while watching this billowing cloud descend. It is certainly a hypnotic and beautiful phenomenon to observe, but any volcanic cloud moving even vaguely in your direction is a clear sign to flee. This suggests that further education of people living in and around Fuego of its volcanic hazards would not only be helpful, it would save lives.

It is rare that eruptions from Fuego produce such large pyroclastic flows that travel so far. This leaves the authorities in an impossible situation. Because if you create exclusion zones based on worst-case scenarios, then decades if not centuries may pass without a worst-case eruption. And all that time people will be grumbling about good and fertile land being inaccessible without good reason.

One notorious example of a pyroclastic flow happening elsewhere was the eruption of Mount Pelée on the island of Martinique on May 8, 1902. Pyroclastic flows destroyed the town of Saint-Pierre and killed an estimated 30,000 people. Only a handful survived, one of whom was a prisoner in a jail cell. This was the largest loss of life from pyroclastic flows in the past two centuries.

One of the most famous historical examples of the devastation and loss of life caused by pyroclastic flows is what happened at Pompeii and Herculaneum when Vesuvius erupted in 79 A.D. An important lesson from this eruption is the fickleness of human memory. Because Vesuvius had been dormant for at least 700 years, it wasn’t recognized as a potential threat.

Volcanologists know from their studies that the frequency of large eruptions at a specific volcano may be one every few centuries or every few thousand years. But on a human time scale these numbers lose impact because there may be no aged relatives around who remember past eruptions, and so a complacent sense of “all is well” pervades.

Many communities living around volcanoes have other more immediate concerns, including other natural hazards. It’s an unresolved paradox. The eruption of Vesuvius produced a number of pyroclastic flows which led to the deaths of at least 1,400 people, and the burial of the settlements by volcanic material. Recent excavations revealed evidence of a new type of death from this eruption – a person being struck by a large block, possibly carried by one of the pyroclastic flows.

It is too early to tell what will happen next with Fuego. But given its recent history, this eruption is an unusually large and extreme event. Fortunately, these tend to be infrequent. It is sincerely hoped that there will be no sudden repeat of the large and far-traveled pyroclastic flows that took so many lives. Whatever happens, there will be a huge amount of work to do in rebuilding communities and working through collective grief.