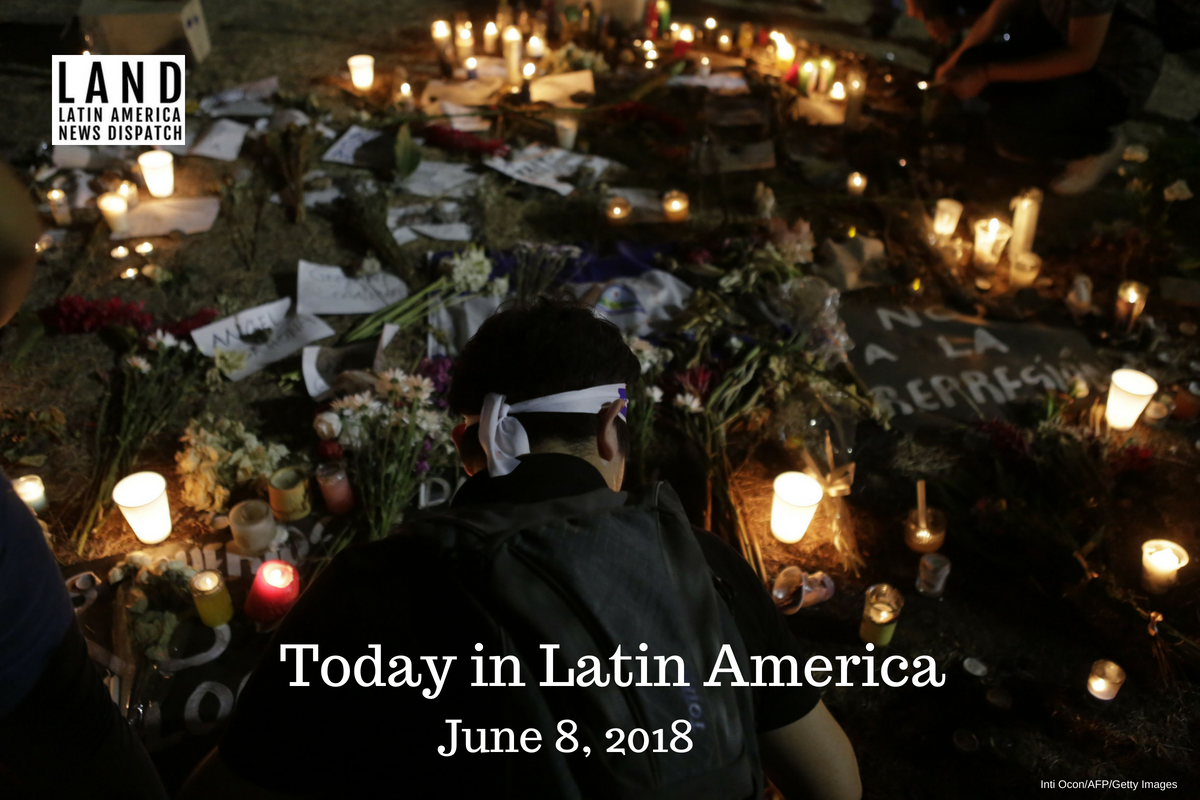 Students carry candles during a protest in Managua on April 27, 2018. (Photo by Inti Ocon/AFP/Getty Images)

NICARAGUA: Yesterday, the Episcopal Conference of Catholic bishops met with President Daniel Ortega to restart talks aimed at finding a way to put an end to antigovernment protests that have rocked the country since mid April. No formal plan was reached as Ortega requested a “period of reflection” to consider the bishops’ proposal, which was not made public. The Nicaraguan Episcopal Conference had called off ongoing talks last week after a Mother’s Day march where 16 were killed.

Meanwhile, the U.S. Department of State announced yesterday it is placing travel bans on officials of Ortega’s administration whom it accuses of human rights abuses during the protests. The department didn’t say how many officials would be affected, who they were or how it had determined their responsibility in the violence. It did say the ban included members of the National Police, municipal governments, the Health Ministry and some of their family members.

The Inter-American Human Rights Commission denounced on Wednesday that the violence had resulted in 127 dead protesters and 1,200 wounded, while the Nicaraguan Center for Human Rights calculates 134 people have been killed. But the government only has recognized 42 deaths.

UNITED STATES: Asylum-seekers at the U.S.-Mexican border are having to wait unusually long times to be received by immigration officials. Instead of the few hours that it normally takes, people are waiting for days or weeks. Asylum requests have steadily risen in the past few years but there is no clear explanation for the sudden increase in wait times, which are only comparable to 2016 when the arrival of thousands of Haitians at the border check point in San Diego overwhelmed its capacity.

DOMINICAN REPUBLIC: A vote will be held today to elect the new rotating members of the United Nations Security Council and the regional group of Latin America and the Caribbean has proposed the Dominican Republic to replace Bolivia as its representative. This will be the first time that the Caribbean nation occupies the seat.

GUATEMALA: Authorities have stopped searching for survivors of the Volcán de Fuego eruption because too much time has passed and finding anyone still alive is highly improbable, and because conditions in the area (still-hot volcanic material and rains that could cause mudslides) make the endeavor too risky. Anguished locals have decided to search themselves for missing family members despite the authorities’ warnings not to enter the disaster zone.

Meanwhile, Guatemalan prosecutors have ordered a probe on whether there was criminal negligence on the part of authorities who failed to evacuate people before the disaster struck. The national institute for seismology and volcanology says it issued warnings and accused the civil emergency authority, Conred, of not acting upon them. Conred’s Twitter feed shows that three hours before the explosion it had said it wasn’t yet necessary to evacuate, but the organization says it did issue alerts but they were ignored.

VENEZUELA: The European Commission announced on Wednesday it will give Venezuela $41.5 million in emergency aid. The funding will go to health assistance, food security, water, sanitation, conflict prevention and support for neighboring countries who are receiving migrants.

PERU: Wednesday’s vote suspending Kenji Fujimori and two other senators was annulled yesterday morning because of errors in the definition of which legislators could participate in the vote and which couldn’t. In the afternoon there was a new vote with the same results of Wednesday’s vote: the three senators will be suspended while a corruption investigation takes place but they will not be ousted.

BOLIVIA: Thousands marched from the city mostly indigenous city of El Alto to neighboring La Paz demanding justice for the death of a student in another protest two weeks ago. The original protest was to demand more funds for El Alto Public University.

ARGENTINA: The International Monetary Fund agreed to give Argentina a larger than expected credit line of $50 billion to fend off a looming economic crisis, more than double then what is usually granted for such lines, known as standby agreements. The deal requires more stringent austerity measures than initially planned, but Treasury Minister Nicolás Dujovne said it included a provision to increase welfare spending if economic indicators worsen in what seemed an attempt to placate public opinion. Protests against the deal had swept the nation last week, as many blame the I.M.F. for the economic crash and default of 2001.

BRAZIL: National oil company Petrobras auctioned four offshore pre-salt oil fields on Thursday. Although there were fears that the recent trucker’s strike over the price of gas would scare off international investors, this was not the case and multinational oil companies invested $798 millionto explore three of the four fields (there were no bids on the fourth). During the strike Petrobras’ stock had plunged more than 20 percent.