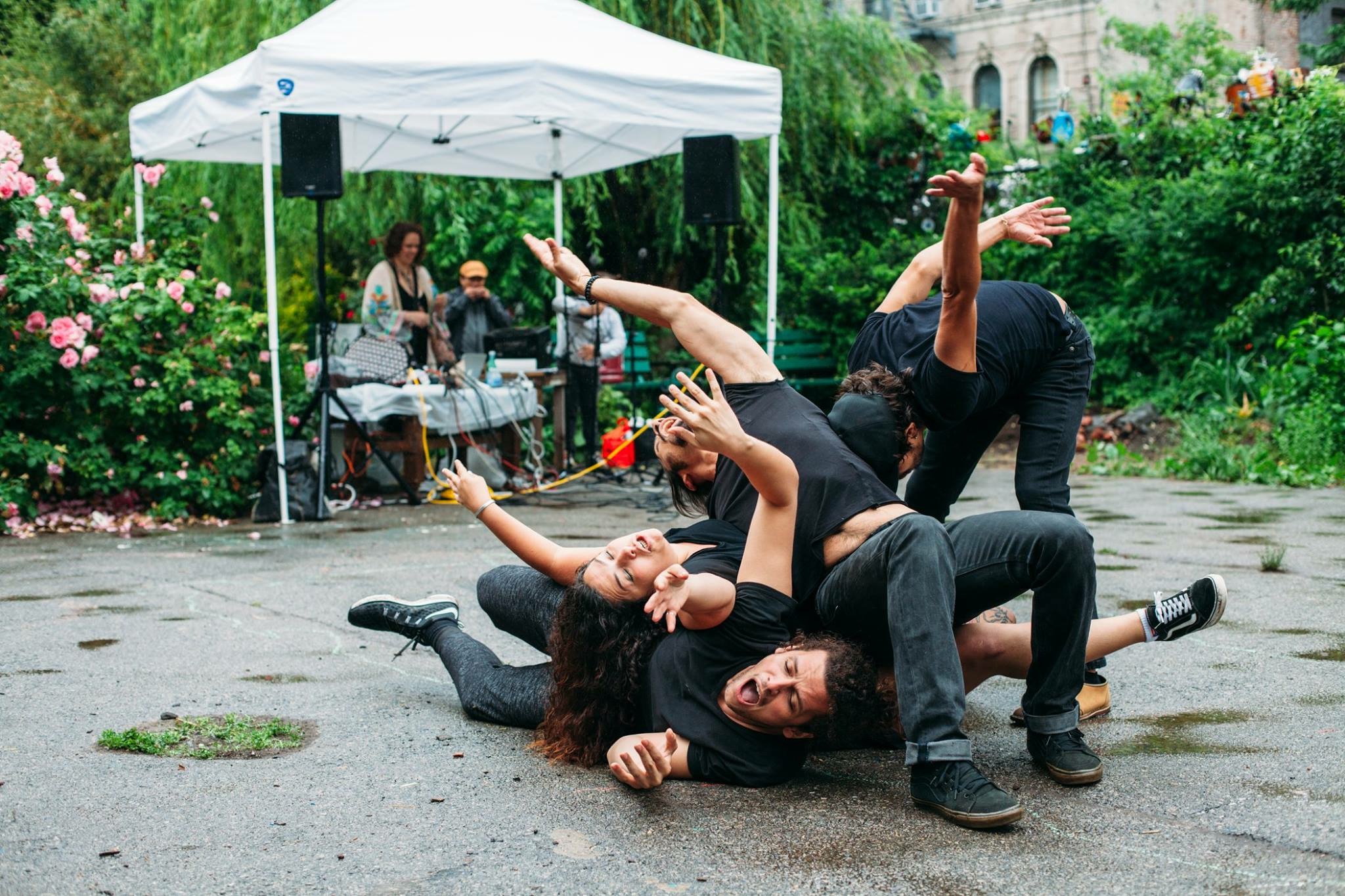 ¡Ay María!, a play that follows a group of Puerto Rican neighbors who, despite not knowing one another before Hurricane María, must come together in its aftermath, was performed outside of Puerto Rico for the first time last month at the Loisaida Festival in New York City. Since the mobile play began touring the island of Puerto Rico, it has facilitated a space for performers and audiences alike to connect through interactive theater.

“The idea, back then, was to create a play that could provide a bit of distraction for people, but at the same time, that could provoke some reflection, too,” says José Eugenio Hernández, an Associate Professor at the University of Puerto Rico-Humacao and a member of the original cast of ¡Ay María! In the play, neighbors work together to overcome long lines for basic necessities (like water, food, or gas), frustrating pleas for federal disaster relief over the phone and the stifling heat compounded by the threat of mosquito bites.

In November, the play’s six-person cast (Marisa Gómez, José Eugenio Hernández, José Luis Gutiérrez, Bryan Villarini, Yan Collazo y Mickey Negrón) began a journey with a rented mobile home that would take them through all 78 of Puerto Rico’s hurricane-ravaged municipalities. They performed a total of 88 times, sometimes at a rate of three shows per day.

“It was well received, it was the first play to be performed after the hurricane,” explains Hernández.

Theater As a Tool for Social Change

Maritza Pérez Otero, an important figure in Puerto Rican street theater, is the director. She has been active since the 1970s, an era in which “protest theater in Puerto Rico was flourishing,” according to Hernández. Back then, Pérez Otero was also part of a trend that grew out of the ideas of Brazilian theater director Augusto Boal, who is known for theorizing the Theater of the Oppressed, “a form of popular community-based education that uses theater as a tool for social change.”

The result is a collaborative effort to process a large-scale traumatic event in real-time. ¡Ay María!, however, was not alone in this regard. The play was highlighted in a multimedia report by The Washington Post published in late February, along with the work of other artists in Puerto Rico trying to convert the trauma of Hurricane María into healing.

“We’ve had performances where there are people in the audience that join us onstage as instead of being characters, we were real people,” recalls Hernández.

Moreover, the actors share this same connection to the play’s source material, or as Hernández explains, “We have the lived experience…and I think that’s the most valuable thing that we have with this piece.”

In addition to audience participation, the play also adapts current events into the frenetic, cacophonous plot. The presidential visit to Puerto Rico in October is one such example, with actor Mickey Negrón impersonating President Trump while parading around the stage with a roll of paper towel and a few choice words for the Puerto Ricans that have “thrown his budget out of whack,” to borrow a phrase.

The official Hurricane Maria death count is also part of the political satire of ¡Ay María! José Luis Gutiérrez takes on the role of an anxious Governor Ricardo Rosselló as he refuses to count the deaths of loved ones reported by his fellow cast members. “Did they do an autopsy?” becomes his morbid refrain.

“It’s a play that’s very critical toward the local government, the federal government, and the emergency management in Puerto Rico, which was very mediocre,” says Hernández.

The number of deaths remains topical as just days before the start of hurricane season, a study released by the Harvard School of Public Health estimated that the Hurricane María death could be more than 70 times the official death count, which remains at 64, pending a report from the Milken Institute School of Public Health at George Washington University.

Eventually, ¡Ay María! would bring Calderón and the cast to New York City at the invitation of the Loisaida Inc. Center and Helen Ceballos, artistic director of Mezcolanza, a cultural platform founded in Buenos Aires in 2013. The two organizations have collaborated for three years on a theater lab as part of Loisaida, which celebrates the Puerto Rican heritage of the Lower East Side on the Sunday before Memorial Day.

In adapting the piece for the New York City premiere, Hernández says not much was changed. ¡Ay María!, he says, already mentions the Puerto Rican diaspora a few times.

“It’s the first time that we present the piece to a diaspora audience that lived through the hurricane, but from another point of view, and also was affected because obviously the diaspora has family there,” he explains.

Overall, the play has come full-circle, having reached mainland audiences, according to Calderón. After the Loisaida Festival, ¡Ay María! was subsequently performed at the Julia de Burgos Cultural Center in East Harlem and at the Capital District Latinos in Albany.

“I think that New York is like the peak of a [narrative] arc that we wanted to finish,” she says.